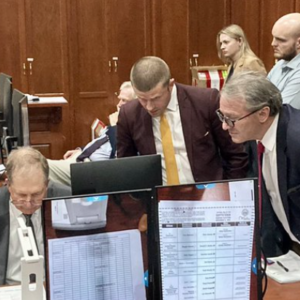 Tie Goes to the… Who? Tied Rochester Race Creates Headache for NH House

In another stunning twist in the battle for the New Hampshire House majority, a recount ended in a tie on Wednesday, even as the GOP’s majority fell to a single-vote margin.

“Wow,” said WMUR-TV’s Adam Sexton when the count came back 970-970 in the recount for Rochester’s Ward 4 seat, a race between incumbent Rep. Chuck Grassie (D) and GOP challenger David Walker. Walker entered the race with a one-vote lead. With it now gone, the race could be determined by outstanding challenged ballots whose adjudication will be handled by the Ballot Law Commission on November 28.

For the moment, Republicans control 200 seats, Democrats 199, and the tie seat outstanding. There are 16 House recounts remaining.

A tied House race is uncommon, but not unheard of. In 1992, for example, Republican Richard G. Hagan and Democrat Thomas J. Kirby tied for the third of three seats in Pelham (then Hillsborough District 24), at 1,919 votes. The Republican-controlled legislature, with a solid 258-136 majority, had the authority to decide which candidate would be seated. Instead, it passed House Resolution 10 which declared the seat vacant and authorized a run-off between just the two candidates locked in a tie.

Some Republicans tell NHJournal Cote is putting the cart before the horse.

First, the election results and outstanding ballot issues will go before New Hampshire’s Ballot Law Commission. Lawyers for each party will challenge some ballots, hoping to successfully allow, or disallow, certain ballots where the intent of the voter may not be clear. Successful challenges before the commission could break the tie.

“I wonder if he (Cote) knows something about the strength of the challenges that others may not,” former GOP Speaker William O’Brien said.

The ultimate judge of the elections, though, is the House of Representatives itself.

“Assuming one or more ballot challenges thereafter remain, then the review of the Ballot Law Commission’s rulings would go to the House,” O’Brien said.

December 7 is Organization Day for the House when members are sworn in, a Speaker is chosen, and contested election issues are resolved. If that day arrives with a single seat determining the majority and a tied race, it would be a moment of high drama — particularly in a political body known for attendance issues.

Currently, Republicans have a one-seat margin, pending the tie, but two wins have already flipped from Republican to Democrat and a third Republican victory was wiped away with the tie in Rochester Ward-4.