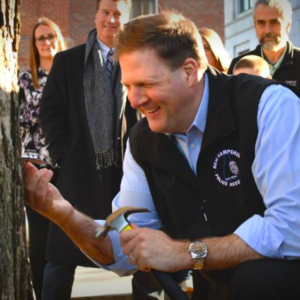 Three Takeaways From the New “Sununu’s up Big” UNH Poll

A new Granite State Poll, conducted by the University of New Hampshire Survey Center, is out and it has good news for GOP Governor Chris Sununu and his party.

Here are your three takeaways:

2– Sununu’s doing it with independents.

Yes it’s true that Sununu’s number with Republicans is at a record-high 81 percent. But in New Hampshire, as in the rest of the country, fewer and fewer voters are identifying themselves with either party. The growth is among non-affiliated and/or “leaning independents,”–independents who tend to vote for the same party year after year but are unwilling to identify as a member.

And it’s not just Sununu’s number in the latest poll that looks good, it’s his overall trajectory. For more than a year Sununu has been above 50 percent with independent voters–with his approval spiking to 71 percent in February.  His numbers among Democrats have been flat or falling since last summer, but Sununu’s numbers among independents have taken a different track.  Which means his support among independents isn’t just a lagging indicator of future lack of support among less-partisan voters.  Sununu has apparently connected with independents and, presumably, can get their support in the fall.

If I were Sununu’s campaign manager, the Trump vs. Sununu number would be my reason for an extra round of Bushmill’s tonight.

Whichever one becomes the Democratic nominee and faces off with Sununu is going to have competitive numbers due to sheer partisan gravity.

The candidate Chris Sununu fears most–or should, anyway–is Donald Trump.  He’s the engine of Democratic turnout and donor passion. If Sununu’s numbers were tied to Trump’s in any significant way, Sununu would wake up every morning wondering “Is this the day Donald Trump takes me down?”  Democrats have certainly been hoping that would be the case.  But look at the approval line for President Trump compared to Governor Sununu. 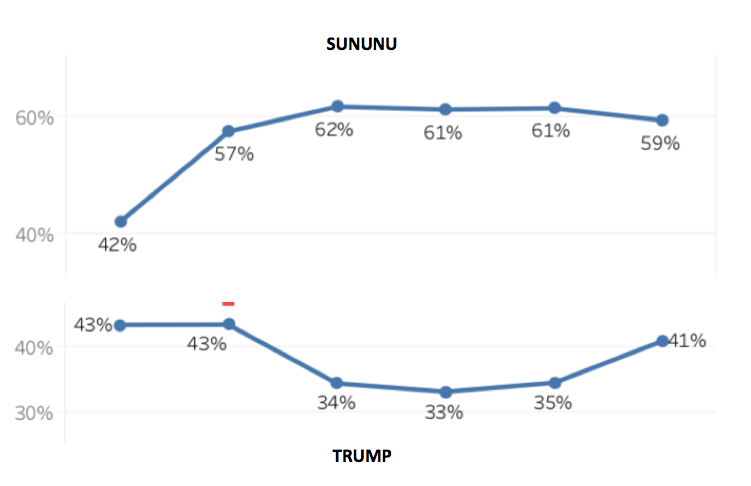 These two candidates are on the separate tracks. Sununu has, for the moment, found the sweet spot where 77 percent of Trump voters approve of him, but only 33 percent of Hillary Clinton voters disapprove. If Sununu can keep Republicans and GOP leaners on board without inspiring an anti-Trump backlash, he’ll be in good shape this November.

This split also bodes well for the NHGOP. November isn’t going to be nice to the Republican Party, but if voters see space between President Trump and their local GOP, the margin could be enough to save a few seats.

For Granite State Repubicans, that’s probably as good as 2018 gets.