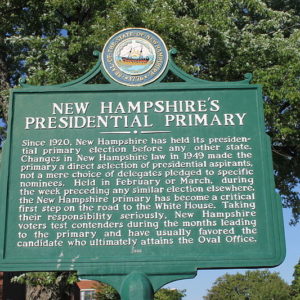 There’s Nothing Wrong With the New Hampshire Primary

Three weeks ago, a reader seeing a headline about Pete Buttigieg, Joe Biden and an endorsement would likely have assumed the former VP was jumping on the Mayor Pete bandwagon. After all, Buttigieg had just won the Iowa caucus and came within 4,000 votes of beating Bernie Sanders in New Hampshire, while Biden was banished to fifth place.

Instead, Biden is now in essentially a two-man race with Sen. Bernie Sanders for the Democratic nomination, his single-digit performance in the Granite State all but forgotten. It’s just another data point, some say, in the case against “too white/too liberal” New Hampshire’s place at the front of the primary line.

As the Boston Globe editorialized, it’s time “for the end of an antiquated system that gives outsized influence in choosing presidents,” to states like New Hampshire and Iowa that “demographically, more resemble 19th-century America than they do the America of today.”

When two of the top three #FITN finishers drop out less than three weeks after their star turns in the Granite State — and a candidate who fled New Hampshire before the polls closed to escape his single-digit finish is now a frontrunner — it can be argued that the results of the New Hampshire primary are irrelevant to the final outcome.

But that doesn’t mean New Hampshire’s primary voters were wrong. In fact, their analysis of the Democratic field was pretty dead on.

According to Granite State voters, Democrats have two weak frontrunners, some previously unknown political talent, a pretender or two, and a party base that’s left of center but not fully socialist. That’s better punditry than you’ll get on most cable TV panels.

Start with the frontrunners: Sanders is still the candidate to beat and FiveThirtyEight’s analysis says that he’s likely to finish the primaries with a narrow plurality. But why just a plurality and not an outright win? Sanders’ struggled to beat newcomer Buttigieg in the Vermont senator’s neighboring state as his support took a nosedive this year vs 2016 — from 62 percent to 26 percent.

Why didn’t Sanders have the sort of performance in New Hampshire that Biden did in South Carolina? Or at least a double-digit win? Because Granite Staters evaluated him as a candidate and many found him wanting. Those same reservations are on display today in Sanders’ relatively weak polling in most of the Super Tuesday states. Sure, he’ll win deep-blue California and Vermont, and maybe knock off Liz Warren in Massachusetts. But in swing states like Virginia and North Carolina, he’s struggling.

As for Biden, the Democratic establishment is in the process of propping him up and turning him into the presumptive nominee. Even if they don’t succeed, he’s almost certain to arrive at the convention in second place — a far cry from his finish in New Hampshire. But here again, Granite State Democrats were trying to tell their party something about the Joe Biden they saw on the stump: If voters have a viable choice other than Biden, they’re likely to take it.

Nobody believes that Biden’s campaigning between New Hampshire and South Carolina suddenly improved. He was the same Biden making the same gaffes — or worse. (“I’m Joe Biden and I’m running for Senate.”) The real change was the electorate. Black voters in the South have an unusual affinity for Biden based on his role in the Obama presidency and his personal connections across the region. And as Rep. Jim Clyburn pointed out, “South Carolinians are pretty leery about that title socialist.”

In other words, Sanders wasn’t a viable option for most South Carolina Democrats and, with a large field of relative unknowns, they stuck with Biden as the non-socialist candidate of last resort. Which is exactly what the Democratic establishment is trying to make him today.

And what about Pete Buttigieg and Amy Klobuchar? Buttigieg is an exceptional political talent. Klobuchar is geographically and ideologically positioned to challenge Trump. They’re both solid candidates — in many ways more solid than the frontrunners.

Then there’s Sen. Elizabeth Warren. The “What happened to Warren?” headlines started before the first votes of 2020 were cast, and they’re likely to continue well past Super Tuesday. The national press and observers from afar treated Warren like a presumed frontrunner, but Granite State voters knew better. Her nine percent in New Hampshire was a brutal verdict on her viability by voters who knew her too well. That verdict is being reaffirmed in polling across the country.

Democrats have two frontrunners, both of them relatively weak. One has an ideology that drives voters away, the other only prospers as the last remaining choice in the field. That’s how New Hampshire viewed the field on February 11.

So far, it looks like they got it right.