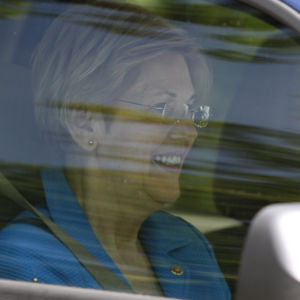 For Elizabeth Warren fans, this headline at the Washington Post is bad:

But is it any worse than the available data on the campaign of the former frontrunner?  Not according to the latest numbers from Gallup (or for that matter, the numbers from the previous three months.)

First the Washington Post, where David Von Drehle is part of their Power Ranking panel covering the 2020 Democrats and wrote:

“In fact, deathwatches have already begun — and not just for Hawaii’s Rep. Tulsi Gabbard. Polls in New Hampshire show Sen. Elizabeth Warren (Mass.) stuck in single digits, far behind Sen. Bernie Sanders (I-Vt.), who proved this week how fervently he wants the Democratic nomination by actually joining the party. Only one left-wing New Englander will be viable after the first primary. So Warren has 48 weeks, max, to turn things around.”

The Post’s Power Ranking currently has Joe Biden in first place, with Sens. Kamala Harris and Joe Biden tied for second. Warren is in seventh place, between Beto O’Rourke and former CO Gov. John Hickenlooper.  This power ranking isn’t a scientific analysis but rather the aggregated opinion of political pundits and reporters at the Post, like CNN’s weekly rankings.

Which, unfortunately for Sen. Warren, also have her in seventh place, down from fourth and behind Sen. Amy Klobuchar and Cory Booker.

Still, these can be dismissed as subjective opinions as opposed to hard data. But the data on Sen. Warren’s campaign isn’t just hard. It’s brutal.

According to the latest Gallup polling, Sen. Warren has the highest negatives of any of the major Democratic candidates, including the fence-sitting Joe Biden.  Among all voters, Warren’s underwater at 32 approve/40 disapprove–the worst performance in the group. And while her performance among Democrats is better (53 approve/18 disapprove), it’s nowhere close to Joe Biden (80 approve/9 disapprove ), Bernie Sanders (76/15 ) or Kamala Harris (52/10 ).

Factoring in her nearly 100 percent name ID, Sen. Warren is clearly the least popular major candidate in the Democrat’s 2020 field.  And her polls over the past three months have been getting worse, not better. So is the Warren campaign on its death bed before the 2020 campaign has fully started?

“The New Hampshire primary is eleven months away. There will be three or four different frontrunners over the next year. I wouldn’t count anyone out yet,” says James M. Demers, a key Democratic strategist who worked on both the Obama ’08 and Clinton ’16 campaigns.

“‘Deathwatch?’ Sounds like a word choice based on getting media attention, not on the facts. I was in New Hampshire for the Democrats’ annual bash, and she was the featured speaker. She faced a room jammed with hundreds of party officials and activists, the people who lead the boots on the ground to drive turnout. She had them on their feet and cheering — repeatedly.

“She persists, and no media-grabbing word choice is going to change that. She’s running for President. Get used to it,” Dolan said.

But persisting isn’t the same as prospering, and the trajectory of Warren’s campaign hasn’t risen in months. And if the conventional wisdom is correct about New Hampshire being a showdown between Warren and Bernie Sanders, the early numbers don’t look good.

“It’s premature to write the obituary on Warren 2020,” says Spencer Kimball of Boston-based Emerson Polling. “Perhaps lowering expectations at this stage might help in the long run, but clearly she does need a game changer at some point.”