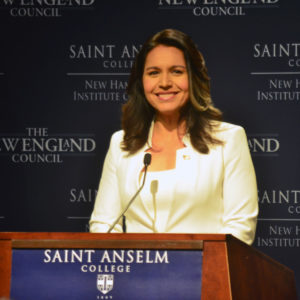 The ‘Walking Dead’ Democrats: Why the 2020 Primary Campaign Is (Mostly) Over

The “Politics and Eggs” breakfast at the New Hampshire Institute of Politics has become of the compulsory events on the presidential campaign trail. On Thursday, 2020 hopeful Rep. Tulsi Gabbard (D-Hawaii) spoke to a packed house of political activists and business leaders. “If she keeps this up, she’ll be a campaign to watch,” Neil Levesque, head of the NHIOP said afterward.

Tell that to Sen. Kirsten Gillibrand. Just two months ago, the New York senator stood on that same stage and spoke to a capacity crowd who greeted her enthusiastically. She followed up with an aggressive campaign of TV ads in the Granite State.

A few weeks later, she dropped out of the race.

Gabbard is a compelling political figure whose mix of pro-military policy and Bernie-Sanders populism doesn’t fit easily into any political box. But her name seems right at home, alas, on the list of “2020 candidates who don’t have a path to the presidency.”

She’s far from alone. Even after Gillibrand and four others abandoned the Democratic primary, 20 Democrats remain in the race.  And 10 of them, including Gabbard (though she came close), couldn’t get the 2 percent polling they needed to make the debate stage this Thursday night.

“We are very close to what will become a ‘sudden-death phase of this campaign’ where the people who clearly have not made it or have not put together campaigns that can go the distance start to bow to that reality,” says veteran New York Times political reporter Alexander Burns.

That’s the reality Massachusetts Rep. Seth Moulton bowed to when he dropped out of the 2020 race last month. “I think it’s evident that this is now a three-way race between Biden, Warren and Sanders, and really it’s a debate about how far left the party should go,” he said at the time.

Longtime Hillary Clinton aide Philippe Reines says the field is a bit wider than that — but not much. “It was legitimate to say ‘Top 5’ for a long time, but with the exception of Kamala Harris being at the outer perimeter of the top three,” he told Politico.  “You’d have to have a strange confluence of events for someone outside those four to win. It would require all four failing. Like, you would need all four of them to be in a plane crash or something.”

And to all those candidates who keep saying there’s still plenty of time for a Rep. Tim Ryan (D-Ohio) or Sen. Michael Bennet (D-Colo.) to catch fire?

“It’s too late in the game to keep saying it’s too early,” Reines says.

The polling tells a brutal tale: in 70 straight national polls of Democratic primary voters, former Vice President Joe Biden was the top choice in 69 of them. And Monmouth polling subsequently identified the one exception as an outlier.

Even more significant is the fact that only three candidates, Biden and Sens. Bernie Sanders and Elizabeth Warren, have consistently polled in double digits over the past three months. Both Mayor Pete Buttigieg and Sen. Kamala Harris briefly bumped up around 10 percent support before quickly falling back. Buttigieg, who’s often referred to as a top-tier candidate, hasn’t had a double-digit performance in a major poll since early June.

Many political pros believe the huge size of the Democratic field — it peaked at 26 candidates if you include 89-year-old former Alaska Sen. Mike Gravel — is camouflaging what is essentially a traditional primary campaign. The candidates who are well known and well funded are having the most polling success, and the rest of the field is largely irrelevant.

Joe Biden’s a former vice president who’s making his third bid for the White House. Sen. Bernie Sanders finished a close second just two years ago. The first “Draft Warren” movement began in 2014. None of the other candidates began their campaigns with anything close to these levels of national name ID or political prominence.

Is it a coincidence that none of them are currently competitive in the polling, either.

This is particularly true of Joe Biden. The last vice president to be denied his party’s nomination was Truman’s VP Alben Barkley in 1952, who never formally entered the race. (Labor leaders withheld vital support because of Barkley’s age. He would have been 75 on Inauguration Day — three years younger than Biden).

Richard Nixon, Hubert Humphrey, Walter Mondale and George H.W. Bush all won their party’s nomination. Interestingly, they all lost a general election for the White House, too.

When parties don’t nominate previous VPs, they often pick a previous presidential candidate. Every GOP nominee going back to Sen. Barry Goldwater in 1964 had previously run for president with the exception of George W. Bush, who was the son of the previous Republican president.  Hillary Clinton was a campaign veteran, while Al Gore was a two-fer — running for president in 1988 then serving as Bill Clinton’s vice president before running again in 2000.

And then there’s the “who needs you?” question. Democrats are having a lively debate about the future of their party between traditional liberals and activist progressives. Polls consistently show Democrats are closely divided between moderates/conservatives (53 percent) and liberals/progressives (46 percent).

Both views are currently represented by the top-tier candidates, with Biden viewed as the moderate while Sanders and Warren are full-throated progressives. As long as there’s a frontrunner representing each wing of the party, who needs a lesser-known alternative?

Veteran New Hampshire Democratic strategist Jim Demers insists the nomination process is far from over.  “I have always believed that voters start to tune in the day after Labor Day,” he tells InsideSources. “We spend all this upfront time on party activists, but the average voter won’t get engaged until the field is winnowed down.”

“Most voters won’t get serious until there are fewer candidates to pick from,” Demers says. “Now we’ll see if that starts to change.”

Unfortunately for those Democratic voters awaiting a smaller field, several lesser-known candidates are in for the long haul. Beto O’Rourke’s polling may put him behind tech entrepreneur Andrew Yang, but his early media buzz helped him raise $14 million and he still has more than $5 million on hand.  And while Buttigieg is struggling to hit 5 percent in the polls, he’s got a whopping $20 million in the bank.

And then there’s Senator Sanders, whose massive network of grassroots activists and small-dollar donors took him all the way to the convention in 2016. It’s likely they’ll do the same in 2020, regardless of the primary’s outcome.

So, is there any path forward for a Tulsi Gabbard or Tim Ryan? Demers notes one missing element in the frontrunner field: Youth.