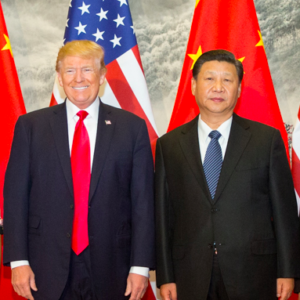 After almost winning New Hampshire in 2016, President Trump is trying his hand again.

On the eve of the New Hampshire primary, the president will be hosting a rally in Manchester, where last August he launched his “campaign to win the great state of New Hampshire in 2020.” As revealed in this week’s the State of the Union address, the president’s pitch to Granite State voters will be the record-breaking economy.

New reports show that the economy added an additional 225,000 new jobs last month following the largest gain in five years the previous month. Jobless claims are at near record low, as the stock market continues its longest bull run in history, thanks — in large part — to the president cutting taxes and regulations. By some economic indicators, the president seems poised to win New Hampshire this time around.

Accordingly, the economy should have President Trump leading in New Hampshire — but surprisingly, he’s trailing former Vice President Joe Biden, former South Bend Mayor Pete Buttigieg and other Democratic candidates. There is, however, an obvious culprit that is a roadblock in the president’s path: The ongoing trade war, which is hampering the economy.

While it is critical for the U.S. to curb China’s rise, the trade war puts New Hampshire in the middle, costing our state’s taxpayers $111 million and leaving our businesses, farmers and manufacturers to face $41 million in retaliatory tariffs. Since the start of the trade war, New Hampshire’s exports, which support 183,000 jobs, have fallen by nearly 30 percent, explaining in part our state’s climbing unemployment rate.

“We ship to China every week, and all of a sudden we didn’t have any orders,” said Amy Shafmaster of Newington’s Little Bay Lobster Co. Before the trade war, she was selling 50,000 pounds of lobsters a week to China.

Tariffs make our exports unappetizing for China, allowing competing countries to take a bite out of our global market share. “The Canadian lobster is so much cheaper than the U.S. lobster now,” Shafmaster said.

Michael Fairbrother was close to inking a $750,000 deal with a distributor in China that wanted to purchase 100,000 bottles of mead from his Londonderry business. “They said with the tariffs happening, they were taking their business to Poland,” he said, stopping him from hiring new workers and expanding his company. “The conversation at that point went dry.”

Dover manufacturer NEMO Equipment, on the other hand, may be facing the brunt of the tariffs among our state’s manufacturers. The company has so far paid $175,000 in tariffs. “Our growth is being hampered right now because we are not able to expand our workforce,” said CEO Brent Merriam. “I just feel like the tariffs will impact U.S. consumers and businesses a lot more than they will affect Chinese consumers and businesses.”

American consumers are at the bottom of the trade war’s totem pole. In order to pay for tariffs from both China and the U.S. government, companies have to raise their prices.

A Manchester business owner said he has to “increase my price to sell to my clients,” and Chris Buchanan, a Hampstead business owner, said that his increased costs are “going to be passed on to the consumer.” Tariffs drive up prices for everyone.

It’s an important issue for New Hampshire voters and they will support the candidate who ends the trade war. President Trump’s phase one deal with China was a step in the right direction, but the next deal must remove all tariffs.

It would hand him a crucial edge over his challengers, who are promising to end his trade war. With a deal that eliminates tariffs, President Trump can win New Hampshire.