The State of the Sununu is Sunny!

There was plenty of energy — and energy policy — in Gov. Chris Sununu’s State of the State address on Thursday. Sununu’s speech was full of sunny optimism, as was the governor himself. Ironically, the speech was postponed a week due to inclement weather. Plenty of the grins and Granite State cheerleading (“When New Hampshire’s people do it New Hampshire’s way, we set the course and provide a great model for the entire nation!”) that voters have come to expect from the governor.

“In just the last year and in study after study, New Hampshire has been recognized on a national level for our unparalleled quality of life,” Sununu said, before offering a list of bullet points:

Yes, Sununu threw some partisan shade, but that’s to be expected in an election year — particularly when the two Democrats scrapping for the chance to take him on were in attendance: Senate Majority Leader Dan Feltes and Executive Councilor Andru Volinsky. But even Sununu’s partisanship was partly sunny, couched in a conversation about bipartisan cooperation.

For example, Sununu touted his support for paid family medical leave legislation, an idea that’s popular on both sides of the aisle. And he included it in a list with other popular proposals like the New Hampshire Pregnant Workers Fairness Act and the Infants in the Workplace Initiative. But he also made sure the legislature knew that only one paid leave proposal would make it past his veto pen. 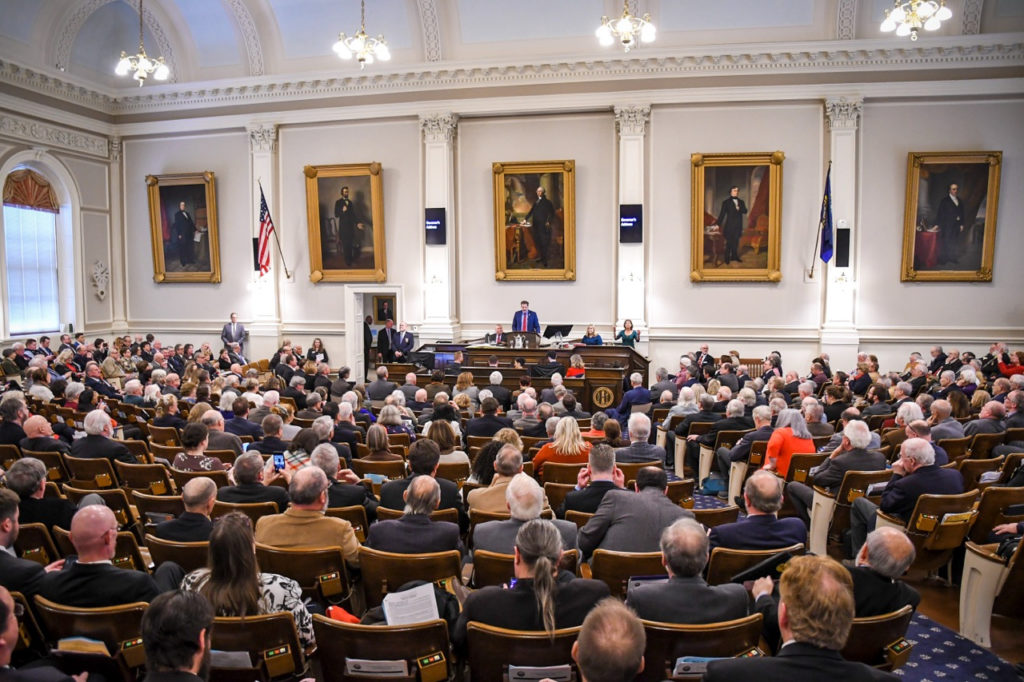 Gov. Chris Sununu delivers the State of the State address on February 13, 2020.

“Senator Jeb Bradley’s bill — which I wholeheartedly support —  has been vetted by insurance officials and is the only shot at delivering a viable voluntary paid family leave program that does not contain an income tax. Let’s not miss this opportunity,” Sununu said.

One of the biggest applause lines came when Sununu reminded lawmakers of his decision not to have New Hampshire participate in the Transportation and Climate Initiative (TCI), a multi-state cap-and-trade pact designed to drive down carbon emissions by raising gas prices.

“When other states tried to shake down our residents for hundreds of millions of dollars in a gas tax — known as TCI — a scheme to pay off their failing public transportation systems, New Hampshire was the first to stand up and say absolutely not,” Sununu said Thursday.

State Senate Democrats led by Feltes have made TCI part of their “Energy Reform and Climate Action” proposal for 2020. Based on estimates from a report at Carbon Xchange, the cost of TCI to Granite Staters would be about $138 million a year.

“The governor’s address today called for bipartisan cooperation. Where we will work with the governor when we can, he has yet to demonstrate his own bipartisanship following a year of record-breaking vetoes — most on bills that had bipartisan support. Unfortunately, his veto just this week of a third bipartisan net metering proposal, sponsored by a Republican, is not a good sign,” Soucy said in a statement.

“We heard a lot of political rhetoric from @GovChrisSununu during the State of the State, but the reality is too many Granite Staters are still struggling to make ends meet with rising costs — including the highest health care costs in the country right here in NH. Governor Sununu says the economy is booming, but the people on the ground I talk to aren’t feeling it. We have the lowest wage growth in New England and we are the only state in New England where unemployment has gone up.”

New Hampshire’s unemployment rate is 2.6 percent, well below the national average of 3.5 percent and the sixth lowest in the country.  It also has the seventh-highest median household income in the nation.

“The best barometer for our economy is how many people are entering the labor force,” says Greg Moore, state director of Americans For Prosperity. “New Hampshire has moved up to 5th place nationally – easily the highest in the Northeast – for the percentage of people in the workforce. That’s the sign of a booming economy; one that draws people in from the sideline to find work.”

“When we come together as a state, we do it better than anyone. Washington could learn a thing or two from us up here,” Sununu said. And another term or two of performances like this, and Republicans may start thinking about sending Sununu to Washington.