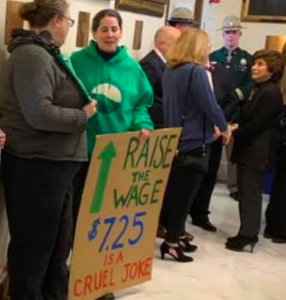 Supporters of a New Hampshire minimum wage hike gather at the state house in Concord on February 20, 2019

The Real Numbers on New Hampshire and the Minimum Wage

The New Hampshire legislature is debating a Democratic proposal to raise the minimum wage in the Granite State, and the reaction from many economic observers is “Why?”

Senate President Donna Soucy, a longtime advocate for implementing a state minimum wage (New Hampshire currently doesn’t have one, defaulting to the federal minimum of $7.25), is promoting a $10 minimum with some caveats linked to other factors such as whether or not the employer offers paid sick days.

At a minimum, the result will be more paperwork for Granite State small businesses to fill out and regulations to comply with.  But what is the “maximum?” What’s the most good a $10 minimum wage law can do in a state with a 2.5 percent unemployment rate, a median household income  of $73,381 (the seventh-highest in the nation) and the lowest poverty rate in the country?

As NHJournal has previously reported, data from the state Economic and Labor Market Information Bureau show there were an estimated 8,000 New Hampshire residents employed at or below the minimum hourly wage in 2017, excluding any tips or commissions.  Yes, that’s right: Just 8,000 people.  In a state of 1.3 million.

That number represents just 1.1 percent of New Hampshire’s employed residents.  If it seems small, it is.  But when compared to the national average—around 2.3 percent—it’s even smaller.  Most people advocating a $10 (or more) New Hampshire minimum wage don’t realize it, but only a tiny fraction of adult Americans work for minimum wage.  And even by that measure, New Hampshire has very few minimum-wage workers.

Still, the case could be made that even those 8,000 workers deserves a higher minimum wage. After all, if so few people earn it, why not follow Sen. Souncy’s lead and raise it, anyway? How can it hurt?

“Doubling the state’s minimum wage to $15 per hour will hurt the very group of workers the policy is intended to help,” Michael R. Strain, economist at the American Enterprise Institute, tells NHJournal. He recently published a study showing that large minimum-wage increases have a negative impact on hiring.  “It will make it much harder for workers with relatively less experience and fewer skills to find employment. And it will increase the prices those workers face, as well,” Strain said.

Not only that, but raising the minimum wage has an impact on labor costs far beyond the 1 percent who get an immediate raise. Research published by the left-leaning Brookings Institute in 2014 found that “an increase in the minimum wage tends to have a ‘ripple effect’ on other workers earning wages near that threshold.” That effect reaches five times as many workers as the minimum wage hike itself.

And according to the Center for Union Facts, it’s common for labor union contracts to have built-in increases tied to changes in the minimum wage. They quote the United Food and Commercial Workers (UFCW) union: “Oftentimes, union contracts are triggered to implement wage hikes in the case of minimum wage increases.” The UFCW suggested this was “one of the many advantages of being a union member.”

With New Hampshire Democrats also pushing a prevailing wage mandate for publicly-funded projects, the net result of a minimum wage hike could be higher unionized labor costs that are then translated into higher costs for taxpayer-funded projects under a new prevailing requirement.

In other words, helping out the tiny fraction of adults working for minimum wage could end up costing New Hampshire businesses and taxpayers a huge amounts of money.

Without a minimum wage, or the business tax hikes NH House Democrats are proposing, New Hampshire already ranks as the top state in the union for economic opportunity.  In a state where businesses are crying out for skilled workers to fill $20/hour jobs, isn’t a better solution to encourage minimum wage workers to increase their skill set and get a better job?