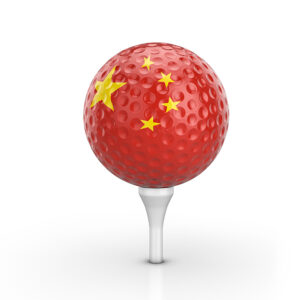 On the heels of NBC’s Beijing Winter Olympics coverage, in which the network faced criticism for publicizing a sporting event staged by an authoritarian regime, numerous sports and entertainment organizations are facing renewed scrutiny over their relationships with China.

That includes professional golf’s PGA Tour, an organization whose close ties and extensive business investments with China have only recently come to light, raising potential legal and regulatory problems for the PGA Tour, which enjoys tax-exempt status courtesy of the American taxpayer.

China has long had a complicated and even strained relationship with the game of golf–going back to the days of Chairman Mao, who in 1949 denounced golf as “a sport of millionaires” and banned it from being played in China. As recently as 2015, the ruling Chinese Communist Party (CCP) banned its members from joining golf clubs, warning expulsion awaited anyone who defied the ban.

In recent years, however, CCP leaders have warmed to the game, presumably because of the big revenue tournaments can generate for China and the international prestige the game could provide the abusive regime. Indeed, the Beijing-based Shankai Sports in 2018 signed a 20-year contract with the PGA Tour Series-China, a development tour similar to circuits run by the PGA Tour in Canada and Latin America.

The PGA-China deal has led to criticism that PGA Tour is providing cover for a government accused of widespread human rights abuses by partnering with them on high-profile golf events. It also faces regulatory and legal scrutiny as the PGA apparently failed to disclose it in recent tax filings.

“Today, under the dictatorial rule of Xi Jinping – a neo-Maoist thug – the PGA Tour and LPGA Tour include annual treks to Shanghai, China for the WGC-HSBC Champions and Buick LPGA Shanghai,” Pro Golf Weekly’s Jeff Smith recently wrote in an article titled “Where’s the Sportswashing Outrage With Communist China?”

“How evil is the current regime in relation to Mao?” Smith continued, referring to the founding father of the People’s Republic of China. “Last year, the United States officially accused China of committing crimes against humanity, which had engaged in the forced assimilation and eventual erasure of a vulnerable ethnic and religious minority group.”

The PGA deal in China establishes a direct connection between the golf organization and China’s government. Financing came from Yao Capital, a company whose principal is also a member of the Chinese People’s Political Consultative Conference, a political advisory group to the Chinese government, which is in the midst of a five-year plan to develop the country’s sports into a $740 billion industry by 2025.

China has proven a difficult place to do business in for many American companies, with CCP leaders having a long history of pressuring them to conform to the nation’s principles and to avoid criticizing its policies.

China’s strong-arm tactics toward the NBA are well known. When Daryl Morey of the Houston Rockets tweeted his support for Hong Kong’s freedom in 2019, China stopped broadcasting the team’s game. The Rockets and the NBA quickly distanced themselves from Morey’s comments and issued apologies all around.

Even LeBron James, perhaps the biggest name in the NBA, has felt the need to publicly side with China. Now, fans fear the same will happen with the PGA.

“Decent people everywhere root against the power and influence of Communist China, which means hoping for the worst for CCP stooges like LeBron James,” said longtime sports journalist and podcaster Gerry Callahan. “Does golf want to see the PGA become the ‘Pro-Genocide Association?'” Callahan asked.

Those concerns have been heightened in the wake of a report from a public-integrity organization in Washington that the PGA is refusing to disclose details of its financial dealings with Shankai Sports.

Tom Anderson, director of the National Legal and Policy Center’s Government Integrity Project, said that as an organization with tax-exempt status from the IRS, the PGA Tour is required to file financial disclosures regarding its business dealings in China. But the PGA’s tax filings for 2018 and 2020 do not contain any disclosures about its transactions involving Shankai or Yao, Anderson told InsideSources.

In a statement, PGA Tour spokesperson Laury Livsey said the filing isn’t required because the China tour is a separate entity.

“The PGA Tour established a separate entity, based in Beijing,” Livsey said. “The PGA Tour’s Form 990 only relates to the tour’s activity, and the activity of a subsidiary would not be reported on the PGA Tour’s Form 990. In any event, it is not a requirement that organizations identify or disclose ancillary contracts or deals.”

Anderson doesn’t agree, and his organization is filing a complaint with the IRS about the PGA’s lack of disclosure.

“At the end of the day, if you have a serious operation outside of the United States and you’re a non-profit, you have to disclose that operation, and in detail: The number of employees you have, the companies you have contracts with,” Anderson said. “The PGA says they’ve found a loophole, but they haven’t.”

It is tempting to dismiss a topic like golf as just fun and games. But foreign policy experts say the Chinese regime sees it as something else: soft power.

“As China’s economy has grown in recent decades, so, too, has its desire to advance its soft power objectives around the world, including in sport,” said Craig Singleton, Senior Fellow at the Foundation for the Defense of Democracies (FDD), a nonpartisan think tank focused on foreign policy and national security issues.

“Beijing’s hosting of the 2008 summer Olympics was a watershed moment for China, representing the country’s return as a so-called ‘great power.’ Since then, and culminating in the most recent 2021 Olympics, Beijing has methodically invested in sport, entertainment, and international fora as a means to positively shape global perceptions about China.” Singleton added. “Beijing’s soft power investments are also intended to offset criticism of its hard power capabilities, namely China’s ongoing efforts to modernize its military and its intimidation of Taiwan.”

Will pro golfers who oppose China’s anti-democratic policies, its takeover of Hong Kong, or its threats against Taiwan be forced to remain silent or find themselves forced out of the league?

That type of arrangement is part of China’s playbook, James Carafano, vice president for national security and foreign policy at The Heritage Foundation, said in an interview.

“The Chinese purposefully look to take any national or international institution and essentially make it an extension of Chinese power and influence,” Carafano told The Daily Signal, which is Heritage’s multimedia news organization.

It is clear the PGA Tour has tried to minimize, if not outright conceal, their business relationship with China for years, and judging by their recent statement, they continue to downplay their close ties with the CCP. It is time for the non-profit, tax-exempt Tour to fully disclose the extent of their business dealings with China. If they refuse, the IRS and federal regulators must investigate to see if the Tour’s actions violate federal law.