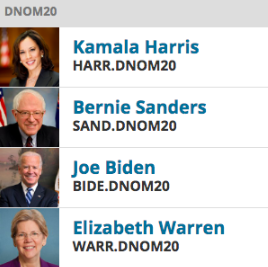 The Iowa Caucuses Are Just 500 Days Away–Do You Know Where Your 2020 Candidate Is?

With the Iowa caucus set for February 3rd, 2020–a mere 500 days from now–it’s a good time to check in on the potential 2020 POTUS candidates and their activities here in the First In The Nation (#FITN) primary state of New Hampshire.  Secretary of State Bill Gardner tells NHJournal that the date for our primary has yet to be set, but he sees no major challenges on the horizon to the Granite State’s traditional role as the starting line for the presidential primary race–likely in mid-February. And, he adds, if any challenges do arise from pesky states trying to move to the front of the line, he’s prepared to deal with them.

Longing GOP consultant Jim Merrill looks across the aisle and says “there is no Democratic heir apparent,” though he tells NHJournal “Democrats appear to want Sen. Elizabeth Warren to stay out.”

So what have the actual (potential) candidates been up to, 500 days ahead of the first votes being cast in the 2020 campaign?

On the Today show this morning, the former VPOTUS threw water on the idea of a third presidential bid, saying there is “more than one way” to change the landscape.

“No, I desperately want to change the landscape,” Biden said. “There is more than one way to do it.  There’s a lot of really talented people we have out there: Kamala Harris, you have Cory Booker, you have the former mayor [sic] of Massachusetts. [Gov. Deval Patrick] You have a lot of talented people.”

While the former VP may be edging away from another run himself, he’s bullish on Democratic prospects in 2018: “We’re going to win back the United States House of Representatives, I promise you. And I predict we’ll win back the Senate, too,” he said.

In a bit of unfortunate timing, a new Suffolk University Political Research Center poll hit yesterday finding that 58 percent of Sen. Warren’s own Massachusetts constituents don’t want to see her run for POTUS in 2020. Sen. Warren’s currently running for re-election this November and has a 30-point lead over her token GOP opposition, so it’s interesting that the same voters who support her overwhelmingly also say they don’t want her to run.

“This was a shocking finding to me, given that Democrats like her so much, and she has been making moves to run for president. I would have expected her to be leading this list of potential Massachusetts presidential candidates,” said David Paleologos, director of the poll.

Not that it likely matters. Warren is already sending staff up to the Granite State to take key positions in the state Democratic Party infrastructure.

The Massachusetts congressman may not be a household name, but he’s racking up points where it counts: In the bank. The Daily Beast reports this week that Rep. Moulton has pledged to raise $1 million for Democratic candidates between now and the midterms. “Moulton had already backed more than 30 congressional candidates via his Serve America PAC… and raised more than $1.2 million in the second quarter of this year alone.” This makes Moulton the third-highest Democratic fundraiser in Congress.

Moulton’s 2020 momentum took a major hit two weeks ago when his handpicked candidate for Congress in NH-01, Maura Sullivan, with whom he campaigned on the ground in the Granite State, got crushed in the primary–despite outspending the entire field. “Moulton made some enemies here going in so big for Sullivan,” Merrill says.

Sen. Cory Booker: He IS Spartacus.

The New Jersey senator told New York magazine this week: “Of course the presidency will be something I consider. It would be irresponsible not to.” What else do you need to know?

The Oregon progressive was just in New Hampshire, he’s got his Blue Wave Project PAC up and running, and NBC News reports that he’s ready to spend money putting staffers on the ground in Iowa and New Hampshire to help Democrats win in November.

And according to Democratic activist and Hillary 2016 staffer Gene Martin, tactics like these matter. “Anyone who is helping secure victory in 2018 gets the benefit of building those New Hampshire relationships now,” he tells NHJournal.  “Democratic activists love to see the investment in our state.”

What’s interesting here in New Hampshire is how little talk there is around the notion of a Sanders 2020 campaign. Progressive candidates didn’t fare well in the state’s Democratic primaries, and his own son couldn’t get 2 percent of the vote in the NH-01 race. “If Sanders does run in 2020, I think you will see a very different dynamic among the candidates, 2016 was basically a one on one race, you won’t see that again,” Martin tells NHJournal.

No conversation in New Hampshre about 2020 lasts more than a minute or two before the name “Michael Avenatti” comes up. He was well received at a Democratic event here a few weeks ago, and he’s returning for a party fundraiser in Plymouth, NH on September 29.  He told NHJournal that there’s a “small subset” of Democrats who could beat President Trump, and that subset includes him.  And if you think his (ahem) “non-traditional” resume is a problem for Granite State Dems, the official invite describes him as “the high-profile lawyer for Stormy Daniels.”

Earlier today TheRoot.com released a video interview with California Sen. Kamala Harris in which they asked her when she’s announcing her candidacy for the White House. “I am here to announce that I am going to do everything in my power to make sure we win this 2018 election cycle,” she said.  Several democratic activists tell NHJournal that, at this very early stage, Kamala Harris is high on their list of candidates.

And yet, Sen. Harris has yet to make a trip to the Granite State, or to Iowa. However, she is releasing a new book early next year: “The Truths We Hold: An American Journey,” which is a move straight out of the POTUS campaign playbook.

OTHER NAMES OF NOTE…

Former Virgina Gov. Terry McAuliffe said in Iowa on Tuesday he’s not ruling out a 2020 Democratic campaign for president. “Clearly Terry’s looking hard at it,” said veteran Democratic strategist Jim Margolis, a top adviser to Barack Obama’s 2008 and 2012 presidential campaigns. “If he decided to, he could credibly make a run.”

U.S. Rep. Tulsi Gabbard (D-HI) will be in New Hampshire this weekend, the featured speaker at a summit in Keene hosted by the far-Left Rights & Democracy and the Monadnock Progressive Alliance.

IF YOU’RE LOOKING FOR DATA….

The UNH Granite State Poll of Democrats a month ago found:

Perhaps more significantly, the betting markets 500 days out look like this: 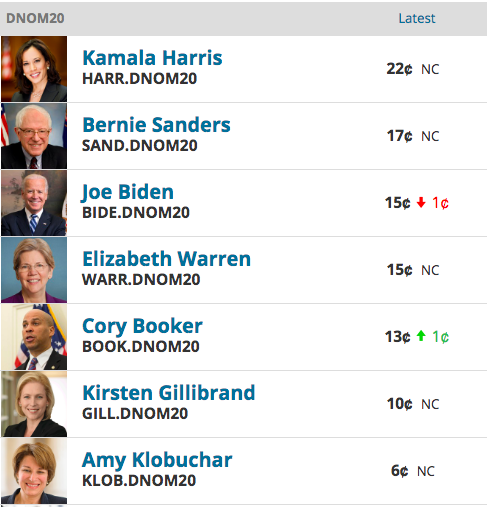