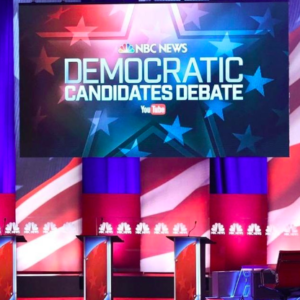 The first debate of the 2020 election cycle is scheduled for 90 days from today (and 497 days before the 2020 presidential election) when the Democratic candidates take the stage on June 26 in Miami. The second debate will take place the next night at the same location. They will be hosted by NBC News, MSNBC, and Spanish language network Telemundo.

There are still some big-name candidates expected to enter the race who haven’t yet (hint: Rhymes with “hidin'”) and some other well-known politicians like Georgia’s Stacey Abrams and Virginia’s Terry McAuliffe who are still considering a run. So the outlook for the primary debates could change drastically in the next 90 days, but here’s what we know:

The Democratic National Committee had an advantage for their 2020 super-field of candidates that the GOP didn’t: They got to watch the other team screw it up.  The Republican strategy of a main debate stage followed by a “kiddie’s table” was both widely mocked and viewed as demeaning to political figures like Sen. Lindsey Graham and Gov. Rick Perry who — like them or hate them — are successful politicians in their home states who had legitimate issues to offer in the debate.

The DNC solved the “winners vs. runners up” problem by announcing they’re going to hold (at least) two debates per round as needed, with no more than ten candidates on stage at a time. And the candidates will be assigned to their debates randomly, not based on polling: A level playing field for everyone.

All the candidates have to do is qualify to get on the stage in the first place. How?

1: Register more than 1 percent or higher in at least three of the polls recognized by the DNC between January and two weeks before the debate; or

2: Receive donations from at least 65,000 individual donors spread out across 20 states.

Note that while some of the polls are national, others are local polls from early states: The Des Moines (IA) Register, the UNH Granite State poll, and Winthrop (S.C.) University. So it’s possible for a candidate to campaign on the ground in early states with little money or national attention and still break through the 1 percent barrier.

(Click here to read the DNC debate rules and guidelines.)

According to FiveThirtyEight and other published accounts, as of 90 days out there are a dozen Democrats who are already guaranteed a slot in Miami:

Two items of note: All of these are announced candidates (or at least at the exploratory committee stage) except Joe Biden. And they all qualified via polling except Andrew Yang, who used the 65,000 donors rule to get in despite having yet to break through the 1 percent mark in three polls.

There are three other candidates who’ve already come close to hitting the 1-percent-plus polling target:

Each of them has already broken through the 1 percent barrier in two of the DNC-approved polls, so it is reasonable to assume they can make it through on one more in the next two months. And some of the other potential candidates like Abrams, McAullife and NYC Mayor Bill de Blasio have enough standing in the Democratic Party that they could conceivably hit the ground running at a 1 percent polling pace.

But other potential candidates, like relatively unknown members of Congress Tim Ryan (D-OH), Seth Moulton (D-MA) and Eric Swalwell (D-CA) don’t have that luxury. If they’re hoping to be part of the 2019 debates for the 2020 presidential race, they should probably think about making a move sooner rather than later.

With 15 or 20 candidates participating in hours of debates months before the Iowa caucus, does it really matter who makes the stage? One argument is that, in the era of social media campaigns and massive small-dollar donors, TV screen time just isn’t as vital as it was even four years ago.

Longtime Democratic consultant Jim Demers of New Hampshire doesn’t agree. “If the high level of interest and large crowds that have been turning out to see candidates in New Hampshire holds true for the rest of the country, then I think the first couple of debates could have very big viewership,” Demers tells InsideSources.  “With so many candidates, I think about half the field could be out by the end of this year, before any votes have been cast so for the lesser-known candidates, a good performance in the early debates is crucial.”

“Debates will likely mostly bolster the opinions of existing supporters for individual candidates — as they historically have. So people will double down on the people they like,” says Lynda Tran, a national Democratic strategist.  “However, the wide field and high likelihood that most debate participants will walk onto the stage unknown to the majority of viewers will offer each of them a meaningful shot at distinguishing themselves. That will matter more this cycle than ever before as the candidates hope to catch fire and attract grassroots supporters. That kind of interest can establish viability these days in ways we haven’t seen before — Exhibit A being Beto O’Rourke.”