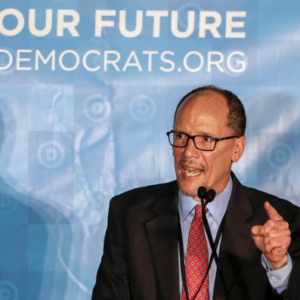 Are You Ready, New Hampshire? The First 2020 POTUS Debate Is Just Six Months Away

Democratic National Committee Chair Tom Perez has announced his party’s plans for debates in the 2020 presidential primary, which are scheduled to start as soon as this June.

The challenge Democrats face isn’t timing but rather volume. With 35 potential candidates currently in the mix, Democrats are looking at the very real possibility of 20 people crowding the stage at the first debate.

“This is the first step in an orderly and transparent debate process,” Perez told reporters on Thursday. “Accommodating such a large field of qualified candidates is a first-class problem to have.”

The DNC plan is to host twelve debates, starting in June of next year.  There will be six debates each in 2019 and 2020, but none of the early states (IA, NH, NV and SC) would host one until 2020. According to Perez, the goal is to get the candidates out of the early states and out across the country.

As for access to the debate stage, Perez said not all the candidates will qualify. There will be a “threshold” based on a mix of metrics like polling, fundraising and grassroots activism, though the specific formula has not been announced.  Candidates who fail to meet the threshold would be excluded. “The critical imperative is making sure everyone feels their candidate got a fair shot,” Perez told reporters. If we’re going to win back the presidency in 2020, Democrats must…restore our voters’ faith in the party that we love and the values that we are fighting for.”

Assuming that an unwieldy number of candidates do qualify, the plan is hold two debates on back-to-back nights to accommodate the numbers. In order to avoid the “kiddie table” controversy that dogged the Republican debates in 2016, the DNC will use random selection to decide who participates in which debate, rather than polling numbers to rank the participants.

“It’s a smart approach, based on the feedback from new [DNC] members and decision makers,” Democratic consultant Joel Payne told NHJournal. “Evaluating grassroots indicators like fundraising is smart. Polling-only model overindexes for name ID. This model will allow insurgent candidates to be included.”

At least one 2020 candidate who might be impacted by the threshold rules, Maryland Congressman John K. Delaney, offered measured support.  “Chair Perez is an honorable man and I know that above all else he wants to establish a debate structure that is fair and on-the-level,” Delaney said in a statement.  “The details really matter and some details are still to be determined, but it is encouraging that the DNC is really embracing a fair process. Their initial proposal appears to be reasonable.”

So far, the plan has received a positive reaction from Granite State Democrats.

“With so many people looking at running for President, it makes sense to use some criteria to determine who is a qualified candidate for the debates,” Jim Demers, who advised both the Obama and Clinton campaigns in New Hampshire, told NHJournal.  “Otherwise, a televised debate with all the candidates could take eight hours.”

“It’s all good,” said NH Democratic National Committeewoman Kathy Sullivan. “The DNC is looking to be very inclusive by including factors other than polling. And by mixing up the candidates, rather than doing adult and kid tables like the GOP did last time, the DNC is giving everyone a fair shake at coverage.”

“Buckle up, everyone. January 2019 in New Hampshire might feel more like what you would expect in January of 2020,” Demers said.