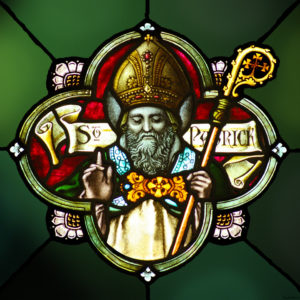 The Enduring Legacy of St. Patrick

DUBLIN — Across the globe on March 17th, the Irish will celebrate St. Patrick. Because of the coronavirus concerns, it may lack the pizazz of previous years, but the most commercially successful saint on the Christian calendar will not be forgotten by his grateful beneficiaries.

For Irish-America, the 5th-century saint has had a significant impact. No other country gets such unfettered access to the White House for a Christian celebration; no other near-mythical personality brings one of the greatest cities in the world to a halt as supporters follow a green line down the middle of Fifth Avenue; and a tiny green plant continues to be central to song, story and advertising portfolios.

Our British cousins must lament their choice of a patron. The English have St. George who was a fairly anonymous Greek who may have killed a few dragons. The Scots did pick an apostle but he was a pretty lowly member of the 12 disciples.

But the gnashing of Welsh teeth can be heard everywhere as one their own was stolen by the Irish for centuries of fame and fortune. The Welsh chose the completely unknown David, whose greatest claim to fame was that he was a vegetarian.

Patrick was indeed a son of Wales who was kidnapped by Irish pirates and spent three years herding sheep on a mountain. He escaped but came back at the Pope’s behest to convert the pagan Irish.

His mission did not have much success because of the obduracy of the Irish High King who saw the idea of a Holy Trinity incomprehensible. “Three gods in one, impossible” he berated Patrick.

The saint, in a masterpiece of marketing, bent down to pluck a tiny plant from the ground. Pointing to the three flowers on the one stem of the shamrock, he convinced the doubting King — and the nation flocked to Christianity.

The fateful meeting had yet another twist.

Patrick with arthritis-ridden limbs had used his staff to support himself as he bent to reach the shamrock. Unfortunately, he missed the ground and instead impaled the foot of the king’s son. This could have had disastrous consequences, but the young prince stayed silent as he thought it was part of the initiation process of Christianity.

The great man was now on a roll and looked for further fields to conquer. Speaking of fields, the land was teeming with snakes much to the anxiety of the populace. Ireland’s greatest saint in an action to be repeated by the Pied Piper of Hamelin centuries later led the offending reptiles over the cliff never to reappear.

So to this day, snakes do not survive in Ireland but live healthy and contented lives across the Irish Sea in Great Britain. Patrick’s success had unintended consequences in 2020 when a pet-lover imported a venomous puff-adder from Africa and was duly bitten.

This species is responsible for more fatalities than any other African snake. Naturally, snake bite serum is not on the shopping list of Irish hospitals because of Patrick’s great work and the silly owner was lucky to survive.

No whizz-kid on Madison Avenue could have dreamed up Patrick. His unique history gave Ireland and the Irish a very special identity as they roamed the world in their millions following the Great Famine.

Our debt to him is incalculable and we will remember him on his feast day. A true Irishman will never describe it as “Paddy’s or Patty’s Day” but rather with reverence utter the immortal words — St. Patrick’s Day.