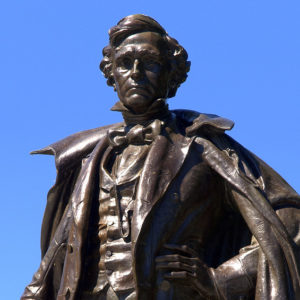 The debate over who should be honored in a public place has reached the Granite State.

Since the murder of George Floyd by a Minneapolis police officer sparked nationwide protests, people across the country have been debating what to do about statues, names, brands and public displays, which glorify the nation’s checkered past.

On one end of the extreme are mobs tearing down statues regardless of who they depict. In July, someone tore down a statue of famed orator and abolitionist Frederick Douglass in Rochester, New York. A month earlier, a San Francisco mob pulled down a statue of Civil War hero President Ulysses S. Grant, who lead the Union army to victory and as president sent troops into the South to battle the Ku Klux Klan.

On the opposite end of the spectrum are those who oppose removing statues and symbols of the Confederacy, such as Gen. Robert E. Lee and Confederate President Jefferson Davis.

These people argue that the Confederate cause of defending the right to hold a person in bondage was morally equivalent to the Union’s cause of abolishing slavery. They see no irony in American military bases named after people who took up arms against their country and killed American soldiers.

In terms of public opinion, a vast majority of Americans support the center option between these two extremes.

Several polls taken recently show that a majority of Americans support the removal of Confederate statues from public places but not the removal of statues of Founding Fathers who owned slaves. This sentiment is echoed by leading voices across the political spectrum from Joe Biden and Nancy Pelosi to Senator Mitch McConnell and the Pentagon.

Dr. Joseph Loconte, director of The Heritage Foundation’s Simon Center for American Studies, summed up the argument succinctly when he testified in front of the House of Representatives on July 21.

“We can all agree that [the Confederates] were on the wrong side of history,” Dr. Loconte said, but “there is nothing noble about” illegally removing statues and “mob rule.”

Here in the Granite State, the debate around statues has centered around two figures from history: Former President Franklin Pierce and colonial woman Hanna Duston.

Hannah Duston was a Puritan Massachusetts colonist taken captive by the Abenaki people in 1697 as part of King William’s War (1689-1697). She was held in Boscawen, N.H. and she killed and scalped 10 of the Native American family members holding them hostage in her escape.

Her story became famous 100 years after her death in 1736 and she has become known as the “mother of the American tradition of scalp-hunting.” A statue of her was erected in Boscawen in 1874.

Some historians have argued that her story was used as a justification for American settlers’ harsh treatment of Native Americans during Manifest Destiny as the country pushed west.

In May, the statue of Duston in Boscawen was vandalized when someone threw a bucket of red paint on it.

Recently, state officials met with Abenaki leaders and academics to discuss additions to the site to make it more historically accurate, according to the Concord Monitor.

This possibly includes the creation of a statue of Abenaki people killed by New Hampshire colonists. These additions, Abenaki leaders hope, will give a fuller picture of the relationship between the indigenous peoples of New England and the English colonists. Duston’s statue is not the only controversial one in New Hampshire.

The only president from New Hampshire, Franklin Pierce is consistently ranked with James Buchanan and Warren G. Harding as one of the worst presidents in history. When asked by a reporter if he knew what he had in common with Pierce, Gov. Chris Sununu replied “I hope nothing. I don’t really like Franklin Pierce.”

Though Pierce’s presidency was uneventful, American politics between 1853 and 1857 certainly weren’t.

The battle over slavery was raging in “Bloody Kansas,” and President Pierce did next to nothing to soothe the situation. As the slavery debate divided America, Pierce made things worse. He signed the Fugitive Slave Act into law, which forced free states to participate in slavery by mandating that they return escaped slaves to their owners.

Once war broke out, former president Pierce continued to sow divisions. On July 4, 1863, the day after the battles of Gettysburg and Vicksburg, which killed a combined total of 8,000 Union soldiers, Pierce gave a speech in Concord defended the South’s right to rebel.

For many, Pierce was expressing support for an enemy who, a day earlier, had killed 47 Granite Staters at Gettysburg. According to The Concord Monitor: “John Clough of Manchester, who had been left for dead on the battlefield at Chancellorsville, argued that while he lay there in misery for 16 days, Pierce was back in New Hampshire conspiring with Confederates against the war effort.” Union veterans did not forget Pierce’s actions.

Twenty-five years later, in 1888, Democrats began proposing that a statue of Pierce be erected in front of the State House. New Hampshire Republicans, who controlled New Hampshire politics at the time, vehemently opposed the effort.

They successfully blocked any attempt to immortalize Pierce until 1912 when Teddy Roosevelt’s progressive movement split the GOP ticket, giving a win to Woodrow Wilson and the Democrats. New Hampshire’s new Democratic governor was quick to act and the Pierce statue was installed on November 25, 1914.

Today there are calls to remove that statue which still stands in front of the State House. Those defending it argue that they are preserving history, but the irony is that hating that statue is a 140-year-old New Hampshire tradition.

Only time will tell if this anger will produce results.