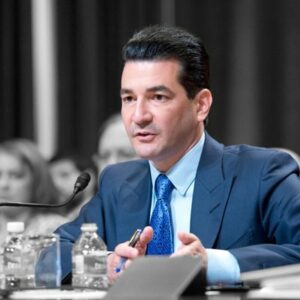 With non-stop news reports about desperate Americans driving hundreds of miles just for the mere chance of getting a COVID-19 vaccine, this may sound crazy: Some public health experts say the looming crisis isn’t a lack of shots, but a lack of arms to put them in.

“At some point, perhaps in April, supply will start exceeding demand. The challenge won’t be how to ration a scarce resource, but how to reach patients reluctant to get vaccinated,” says former Food And Drug Administration chief Dr. Scott Gottlieb in a recent Wall Street Journal op-ed. “The focus now is on expanding distribution and increasing supply. The problems will soon shift to the demand side of the equation.”

Gottlieb repeated his concerns during a podcast interview with National Review’s Rich Lowry:

“I think we’re going to be in a world where there’s a demand problem very soon,” he said. “And I would guess by the end of March, if governors are still in the mode of rationing the vaccine and designating certain prioritized groups, they’re going to have to flip very quickly.”

At a time when social media is full of tearful videos of frightened Americans frustrated they can’t get their shots, Gottlieb’s view may seem counterintuitive. One non-believer is New Hampshire Gov. Chris Sununu, who told NHJournal Tuesday he thought the former FDA chief’s suggestion was “silly.”

“We’re not going to have too much vaccine and not enough demand by the end of March,” Sununu insisted. “Even if Moderna and Pfizer and Johnson, & Johnson meet their goals, that will mean barely enough supply here in New Hampshire to take care of Phase 1B, nevermind getting to Phase 2A or 2B.

“So even if the uptake is less in those subsequent phases — and I suspect it will be —  there’s no reason to think that we’re not gonna have enough people to take the vaccine by the end of March. I think that’s a silly statement, frankly.”

But other health experts have acknowledged that Gottlieb is almost certainly correct. Dr. Anthony Fauci on Sunday told NBC’s Meet The Press that while “demand clearly outstrips supply right now,” that situation is going to change. “That will get better as we get through February and into March,” Fauci said.

Once the low-hanging fruit of older Americans, at-risk people, and frontline health workers have been vaccinated, that will mean about 75 million people will have their shots. But reaching herd immunity will require somewhere between 179 million and 217 million vaccinations. And you’re not going to get those numbers from senior citizens and first responders.

“You’re going to need to get 30-year-olds and 20-year-olds,” Gottlieb says, and these aren’t people who will drive hundreds of miles or stand in line at a clinic for hours to get jabbed. “Does it really convince a 30-year-old, or even 40-year-old, to get the shot when they see Tony Fauci get vaccinated on TV,” Gottlieb asks. “Maybe we should get Lady Gaga.”

Not when they’re being told again and again that their lives won’t change even after they got the vaccine, that they’ll still be stuck social distancing from behind a mask. Some public health officials say that message will discourage participation from some younger Americans.

“You have to start stimulating demand,” Gottlieb told Lowry. “You have to start really working harder to get people in. You can’t just turn that on March 31st when you’re a governor and you see you don’t have enough demand to keep up with supply.”

New Hampshire’s state epidemiologist Dr. Benjamin Chan acknowledged Tuesday that messaging could mean fewer people willing to get vaccinated. “I think that’s an important question,” he told NHJournal Tuesday. “I can’t predict how everybody perceives that message, but it’s not intended to discourage people from getting the vaccine.”

And, he added, he’s not changing the Granite State’s message, either.

“Until we have a very high level of population immunity from the vaccine, we need to continue to practice social distancing and wear face masks,” Dr. Chan said. “We’re simply asking for people to continue with the patterns of behavior that they’ve been in the last several months.”

That message, combined with the fact that about half of Americans say they’re reluctant to take the vaccine, could keep the U.S. from getting the number of shots out it needs for herd immunity, health experts are warning.

“We’re underselling the vaccine,” infectious-disease specialist Aaron Richterman told the New York Times, Harvard epidemiologist Julia Marcus warns, “trying to eliminate even the lowest-risk changes in behavior both underestimates people’s need to be close to one another and discourages the very thing that will get everyone out of this mess: vaccine uptake.”

Meanwhile, Gottlieb says the message effort to start motivating Americans to get vaccinated can’t wait until the supply is here. “I think there’s a vaccine hesitancy and a demand problem,” he said. “We need to be addressing that right now. And we’re just not doing that.”