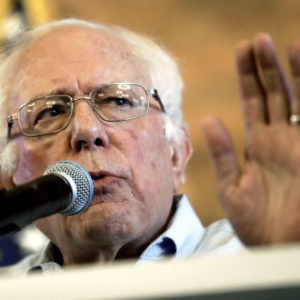 The Big News From the N.H. Primaries? Bernie Sanders Gets Blown Out

In 2016, self-declared Socialist Bernie Sanders won a crushing victory over the Grand Dame of the Democratic Establishment, Hillary Clinton, beating her by 22 points.

Two years later, Granite State primary voters turned up at the polls and said “Bernie who?”

None of the progressive candidates prevailed in Tuesday’s New Hampshire primary. Hillary Clinton supporters from 2016 will top the Democratic ticket in November.  Even Bernie’s son Levi (who he declined to endorse) got an embarrassing 1.75 percent of the vote.

The Democratic Party may be having an Ocasio-Cortez moment, but in both high-profile primaries Tuesday night, the New Hampshire Democratic establishment candidates rolled to victory.  With the public endorsement of the entire Democratic congressional delegation, former state senator Molly Kelly swamped firebrand progressive Steve Marchand 66-34 percent.  Despite what was widely viewed as a lackluster stump performance against a Bernie-style bomb-thrower urging boldness in the era of Trump, Kelly cruised to victory.

[For election results from the NH Primary, click here]

In the First Congressional District primary, party favorite and Executive Councilor Chris Pappas was heavily outspent by Obama administration official and Iraq veteran Maura Kelly. She pushed hard on progressive hot buttons like gun control and women’s issues, she frequently called out President Trump, and even tagged one of her TV ads with “Let’s make America ‘America’ again.”

And she lost by twelve points.

Some of this was structural: Pappas was a popular, well-known local Democrat who entered the race as a frontrunner, so in a sense this outcome was to be expected.  Sullivan turned out to be a weak candidate who seemed determined to turn herself into a parody of the opportunistic carpetbagger.

Still, she and the other progressives in the 11-candidate field made an impact in the NH-01 primary.  Amid all the noise and the turmoil of the Trump moment, New Hampshire Democrats picked the two most stable, Establishment candidates on the ticket. Chris Pappas doesn’t support “Medicare for All” or immediately impeaching Trump. And he won a Democratic primary—one with extremely-high turnout— going away.

But what about Democrats nationwide—particularly those thinking of coming to New Hampshire to campaign for 2020? For the next would-be Bernie Sanders (possibly including the VT Senator himself), Tuesday was a bad night.  It revealed a Democratic electorate that, for the moment, isn’t as obsessed with the national battle over Trump as voters in other states appear to be.

If you’re a potential POTUS candidate, you likely picked up on the fact that, unlike 2016, endorsements from party leaders like Sen. Jeanne Shaheen and Sen. Maggie Hassan appeared to make an impact.  If you’re, say, Tom Steyer or Sen. Cory Booker hoping to run an anti-Establishment, grassroots #Resist campaign, that’s a challenge.

If you’re Joe Biden, it makes New Hampshire a nice place to start a presidential race.

Expect to see many of these 2020 Democrats on the ground in the Granite State for Molly Kelly and Chris Pappas.