The national ACLU has some serious questions for former Vice President Joe Biden about his record on civil rights. They’ve paid for and sent out 100,000 copies of a flier pressuring him to answer those questions to Democratic-leaning households in South Carolina.

But zero in New Hampshire.  Why?  The flier is pretty straightforward:

“The ACLU asked Joe Biden to answer a few questions about civil rights and civil liberties. Seven candidates who qualified for the next debate submitted responses…but Joe Biden hasn’t,” the flier reads.

“Does Joe Biden support rights for all?”

That’s a pretty important question. So why isn’t the ACLU of New Hampshire asking it?

The National ACLU confirmed to NHJournal that they, and not the South Carolina chapter, sent the fliers.  And they confirmed the national ACLU has no plans to mail them into the Granite State.

The ACLU’s publicly-stated goal is to pressure Biden to answer some of their specific questions on civil rights issues that have loomed large in the 2020 Democratic primary. Those issues include voting rights –as in Sen. Bernie Sanders’ stance that incarcerated murderers should have the right to vote; and the criminal justice system, which Sen. Elizabeth Warren has described as “racist from front to back.”

The question Granite State advocates for civil rights are asking is why these issues don’t seem to matter to the New Hampshire ACLU?  They could mail out these fliers themselves. At the very least, they could post them on their ACLU-NH website or link them in their Twitter feed for free.

Which is interesting, because the ACLU-NH is promoting the “get the candidates on the record” issue right now. From their Twitter feed this week–> 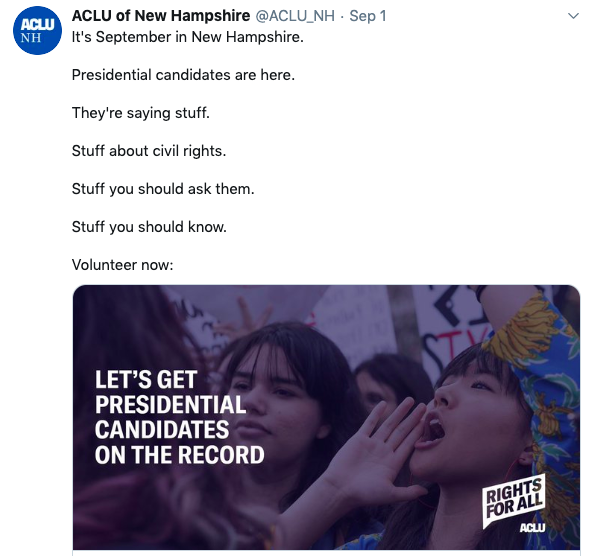 It’s no secret that the Venn diagram of “Deep-pocket NH donors to establishment Democratic candidates” and “People who write big checks to the ACLU-NH” is essentially a circle. So while posting a message on the local ACLU web site is technically “free,” it could be that the defenders of our precious civil rights here in the Granite State see a potential price tag that they’re not prepared to cover.

NHJournal has reached out to the ACLU-NH for comment.