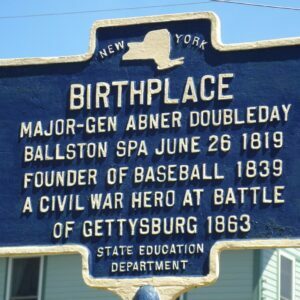 There really was an Abner Doubleday. Baseball did not invent him. But it invented the Doubleday myth.

As America sought to establish itself on the world stage at the end of the 19th and beginning of 20th centuries, it tried to identify those qualities that made one an American. Such qualities  — independence, individualism, hard work and Anglo-Saxonism — supported our sense of exceptionalism.

One of those unique qualities of Americanism was the sport of baseball, which had become our national game in the decades after the Civil War.

America’s most famous sportswriter of the era, Henry Chadwick, an Englishman, however, kept writing that baseball was not a purely American game because it derived from a British children’s game, rounders.

In 1888, Albert Goodwill Spalding, the player-turned-manager-turned-sporting goods magnate, took players on a world tour to promote the game. When Spalding and the players returned to the United States, they were feted at a dinner at Delmonico’s restaurant in New York City.

National League president Abraham Mills waxed nonsensically that baseball was as American as Christopher Columbus and cursed anyone who thought differently. The baseball enthusiasts in the crowd began banging their mugs of beer on tables and yelling, “No rounders! No rounders!”

But then, as Humphrey Bogart’s character says in “Casablanca,” “Destiny has taken a hand.”

The commission received a letter from Abner Graves, a Colorado mining engineer, who told Mills he had been present at the creation when Abner Doubleday invented baseball in Cooperstown in 1839. Everyone was named Abner in those days.

There they were, Abner Graves said, a bunch of 6-year-olds playing townball when Doubleday said, “Hey, guys, I’ve just invented a game.”

There it was — proof beyond doubt — that Doubleday had invented baseball.

It didn’t matter that Graves was a ne’er-do-well, a roustabout, and a con man who would later be institutionalized after murdering his wife.

Who cares that Abner Doubleday was a student at West Point Academy when Graves was playing baseball? For Graves’ story to be true, a 20-year-old cadet would have had to have been AWOL and playing with young boys on a schoolyard 150 miles away.

The Mills Commission, nevertheless, declared Doubleday the inventor of baseball.

Doubleday became an Army captain and served as second-in-command at Fort Sumter, a Union sea fort in the Charleston, South Carolina, harbor, when the Confederacy began the Civil War by shelling the fort on April 12, 1861. Doubleday reportedly fired the first Union shot of the war.

For this act, Doubleday learned from a newspaper reporter that Charlestonians wanted his head. “Fortunately, I was not there to gratify them,” Doubleday responded.

Doubleday later distinguished himself at the Battle of Gettysburg and rose to the rank of brigadier general. He lived a rich and successful life, and died in 1893, never knowing he had invented baseball. His obituaries do not mention his discovery.

The story continued to be passed on from generation to generation until historians and writers began looking at it with a critical eye and declared it, well, gibberish.

In 1969, the Charleston News and Courier ran a story that said that Doubleday had taught his troops and perhaps other Charlestonians to play baseball when he was stationed at Fort Moultrie at Sullivan’s Island before the Union troops moved to Fort Sumter. “Thus, it is clear,” the article said, “that Charleston is the mother city of Southern baseball.”