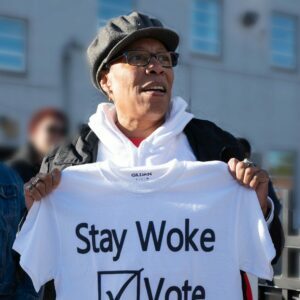 Posted to Politics January 16, 2023 by Ryan Terrell
Democrats believe Granite Staters are too White. As a result, New Hampshire’s century-old First in the Nation (FITN) presidential primary is in jeopardy. Of course, the Republican Party will proudly continue its adherence to the state’s FITN status. But, unfortunately, this political fiasco is a microcosm of a more significant issue with Democrats and progressives — their embrace of woke identity politics.

New Hampshire created the presidential primary in 1920. Since then, it has been a cherished tradition of all voters who value thoroughly vetting presidential hopefuls through tough questions in accessible forums across the state. As political payback, President Joe Biden and woke Democrats push the narrative that our state’s demographic is too White to reflect the voting populace of the Democratic Party, thus unqualified to be first to vet presidential candidates. Further, the far-left continues to frame Whiteness as a threat to democracy and civility.

For months, despite warnings from conservatives, woke Democrats ignored this threat to New Hampshire’s FITN status. Instead, the federal delegation and Democratic Party’s state chair assured voters we would retain our state law-mandated position as first. Now, they embarrassingly clamor to save face by joining Gov. Chris Sununu and Republicans in defending our historic role in presidential politics.

The ideological embrace of identity politics among the Democratic Party and woke progressive activists is solely to blame.

Identity politics are childish and regressive — reducing societies to tribalism. Proponents of identity politics choose to value immutable characteristics like race, gender, and sexual orientation over merit, experience, and aptitude. That type of woke ideology harms everyone, disproportionately the minority groups they claim to help. Regardless, Democrats and far-left activists continue using identity politics as a blunt weapon of moral coercion and political strategy to bludgeon anyone who questions their intent shamelessly.

But, embracing identity politics is both politically and financially beneficial to the far-left Democratic Party and woke activist groups. Overwhelmingly, groups driven by this Communist-derived propaganda donate and support Democrat candidates who bow to the woke orthodoxy. Quid pro quo, Democrats openly push anti-American ideas and use identity politics to guide their policy decisions and fund-raising strategies.

The popularity of identity politics is frustrating but, sadly, not shocking. Given that DEIJ (diversity, equity, inclusion, justice) professionals promote the belief that Whiteness is an ailment — only solved through their expensive training and workshops. For years, they have primed the pump with quixotic calls for social justice and decolonizing American society. Democrats and woke progressives are harvesting the fruits of their concerted efforts to keep identity politics at the forefront of public discourse.

But, the use of identity politics by the far-left to amplify underrepresented groups does not apply to those of us who do not submit to their woke worldview. As the first Black and youngest member of the New Hampshire State Board of Education, I am openly attacked by DEIJ leaders, activist groups, and Democrats for being an unapologetically conservative Republican. Yet, due to disapproval of my worldview, they stood silent as I was publicly called a token, an Uncle Tom, a shuck and jiver, and other racist names by their progressive and Democratic Party colleagues during my initial state board nomination process. Further, they continually overlook my private sector accomplishments and the long list of community volunteering to directly accost me because I publicly disagree with their financially incentivized race-profiteering tactics.

Nothing is wrong with being White. However, while we celebrate and reflect on Martin Luther King Jr.’s life work the progressive embrace of identity politics disables us from achieving his dream of judging each other based on the contents of our character, not the color of our skin.

Identity politics is inherently anti-American. I, along with other proud U.S. citizens, live by the uniquely American belief that everyone of all races, creeds, sexualities, religions, and socio-economic backgrounds is equally endowed with unalienable rights and humanity by God.

The attack on N.H.’s FITN status, the attempts to replace the Columbus Day holiday, and continued endeavors by Democratic progressives to repeal the Freedom from Discrimination in Public Workplaces and Education (HB2, 297-298), along with many other woke follies are the pitfalls of identity politics coming home to roost.

As a proud, Black Louisiana-raised Granite Stater, I reject the woke, race-based retort of my fellow New Hampshire citizens. No one is too White or anything else. I encourage all readers to join other reasonable people and me in denouncing the far-left extreme identity politics of the Democratic Party. Our FITN status and all other liberties, freedoms, and traditions depend on it.

Ryan Terrell serves on the NH State Board of Education and is a candidate for NHGOP Vice Chair. He wrote this for NHJournal.com.