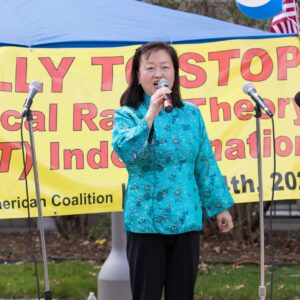 Lily Tang Williams is running in the Second District GOP primary as a libertarian-leaning Republican with a powerful personal story, national TV appearances, and a deep concern about “the rise of authoritarianism in this country.”

Whether the relative newcomer to the state can convert those qualities into Republican primary votes remains to be seen.

“When you see your neighbor’s house on fire it’s your duty to tell them, ‘Your house is on fire!’ If I see my country going down the wrong path, I’ve got to warn my citizens,” Tang Williams told NHJournal. “I’m running because I fear the country I love is becoming the country I left.”

Born in China to illiterate, working-class parents, Tang Williams trained as a lawyer and then fled her native country for Texas in 1988 to attend graduate school. She arrived in the U.S. at age 23 with only $100 in her pocket, she says, but with big hopes “for freedom and prosperity and living my American dream.” 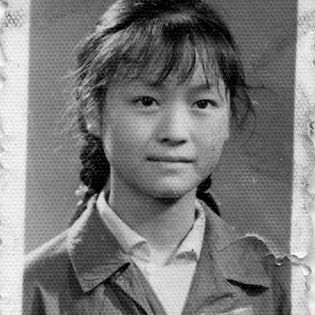 Lily Tang Williams as a child in China.

She married an American, John Williams, 31 years ago, became a U.S. citizen, and raised three children in Colorado, before moving to Weare in 2019.

Tang Williams has built a national profile for herself as a speaker and educator on repression in Communist China. She ran for U.S. Senate in Colorado as a Libertarian in 2016, appears frequently on Fox News, has penned op-eds for major news outlets, and amassed more than 21,000 followers on Twitter. Democrat incumbent Rep. Ann Kuster, by comparison, has less than 6,800 followers. Tang Williams’ GOP primary opponent, George Hansel, whom Gov. Chris Sununu endorsed, has only 565.

Kuster is running for a sixth term. A reliable vote for her party in Congress, Kuster “hasn’t done anything to dishonor herself, so to speak, so there is no reason to vote her out,” said Paul Hodes, a former Democrat congressman who held the NH-02 seat from 2007 to 2010.

But voters in 2022 might be ready for a change. Kuster’s approval rating sits at just 41 percent, and only 33 percent of registered voters think she “deserves re-election,” according to a March 2022 St. Anselm College poll. High gas prices, inflation, and Biden’s dismal approval rating are making this a potentially tough year for Democrat incumbents.

Polls show Biden’s approval in the Granite State has plunged below 40 percent, and an overwhelming majority of voters –including more than half of New Hampshire Democrats — believe the country is on the wrong track.

The Cook Political Report lists the seat as a “toss-up.”

“A lot of people are saying this could be a wave year for Republicans. I’m not sure,” said Hodes.

After 75 years of Republican control, the Second District seat bounced between the two parties beginning with Democrat Dick Swett’s victory in 1990. Since then, the seat has turned over on so-called wave years: Swett lost re-election to moderate Republican, Charlie Bass, in 1994’s “Gingrich Revolution;” Hodes won the seat from Bass in 2006, then retired to run for U.S. Senate, losing in the 2010 Republican wave; Bass then won the seat again, but only held it for one term.

Kuster has held it since 2012, and the district has become solidly Democratic. Going back to the midterms of 2006, Democrats have carried the Second District by an average of eight points (53-45 percent).

Tang Williams is hoping voters will want change, and that they’re willing to look beyond establishment politicians. “It’s hard to put me in a box,” Tang Williams says. She promises “a positive, unifying campaign, and not too partisan. I would love to connect with people in the middle.”

While she organized Asians for Trump in 2020, Tang Williams doesn’t call herself a Trump Republican, nor is she seeking his endorsement. “Trump was the first and only president at that time standing up firm against China, so I wanted him to win re-election,” she says.

When Trump first ran in 2016, Tang Williams was a Libertarian and did not campaign for him.

Most of Tang Williams’ positions align with the Libertarian Party. Whether it is parental rights, cancel culture, gun rights, or even abortion, Tang Williams cites her formative years spent in China during Mao’s Cultural Revolution as the basis for her ideological convictions. She is an outspoken defender of free speech and decries big tech censorship, saying she has been “Facebook jailed many times.” She rejects race and gender-based identity politics as “a Communist tactic.”

“The censorship we see – the cancel culture we see in this country – it’s very similar to what China is doing today to its citizens,” she says. “People are afraid to speak up. I never imagined in my new country I would be subject to another restriction of my speech.”

Tang Williams says inflation and high gas prices are the biggest concerns for Second District voters. Her proposed solutions are increasing U.S. energy production and traditional fiscal conservatism. She says the third top issue is the erosion of parental rights, particularly regarding vaccine mandates, “indoctrination” in the classroom, and parents being called domestic terrorists by the Biden administration for speaking out at contentious school board meetings.

“I grew up in China, where parents have no rights,” Tang Williams said. “In this country, we have a constitutional republic, our kids belong to parents first off, and parents should have some say in school policies, in school curriculums, and mandates in terms of masks and vaccines.”

On abortion, Tang Williams says her Buddhist upbringing taught her to respect all life, but she emphasizes, “woman is life, too.” She supports New Hampshire’s law permitting legal abortion until 24 weeks, with exceptions for the health of the mother.

“I have seen enough interference, controlling of Chinese government on all the Chinese women’s lives, either from forced abortions, forced one-child policy … and now they’re forcing them to have a second baby,” she says. “I want women to have a choice.”

On gun rights, her ardent support for the Second Amendment is also informed by China: “I warn people that the largest mass killer is always a tyrannical government. I use Tiananmen Square as an example.” She worries the new bipartisan gun bill will give rise to red flags laws that “sound good, but you’re going to sacrifice some people, and they are entitled to due process according to the Constitution.”

Hodes believes Tang Williams’ greatest liability is not her policy positions or the fact that she was born in China, but rather that she is new to the state. “In my experience in New Hampshire, longevity and name recognition have a lot to do with electoral success,” Hodes says. Tang Williams’ main primary opponents, Hansel and Bob Burns, both list their New Hampshire bona fides on their websites.

“She’s been here for three years. That’s a bigger knock than anything else,” Hodes said.