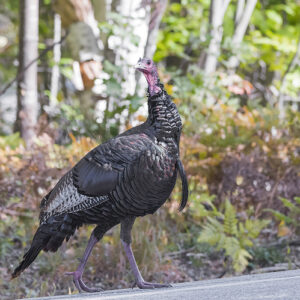 Posted to Education November 23, 2022 by J. Mark Powell
It’s the closest Americans come each year to everyone eating the same meal on the same day. Turkey is essential to the Thanksgiving celebration. But how much do you know about the festive fowl we enjoy every November? Find out with this short, easy, and fun quiz.

1. A popular myth claims which Founding Father wanted the wild turkey as our national bird?

Answer: D.  In a 1785 letter, Franklin criticized the bald eagle as a national symbol and suggested the turkey instead. Modern research has concluded he wasn’t serious and wrote it in jest.

2. According to a national survey, what percentage of Americans eat turkey on Thanksgiving Day?

Answer: B.  46 million birds are consumed on Thanksgiving. Christmas is a distant second with 22 million, and Easter is third with 19 million.

3.  A glut of unsold turkeys after Thanksgiving 1953 sparked the creation of what popular food feature?

4. Abraham Lincoln began the practice of unofficially “pardoning” a turkey in 1863. That bird was given to the Lincoln family for what occasion?

A. To celebrate the Emancipation Proclamation
B. To mark the end of the Civil War
C. For Thanksgiving dinner
D. For Christmas dinner

Answer: D. On Christmas Eve, Lincoln’s 10-year-old son Tad tearfully begged his father to spare the turkey he had named Jack. Lincoln wrote a presidential pardon to appease the boy.

5. In 1926, a man in Mississippi sent President Calvin Coolidge what animal to have for Thanksgiving dinner?

Answer: D. Vinnie Joyce of Nitta Yuma, Miss. shipped the critter to the White House. Coolidge fell in love with it, named it Rebecca, and kept it as a pet.