Could a McAuliffe Loss in VA Hurt Dems in New Hampshire? 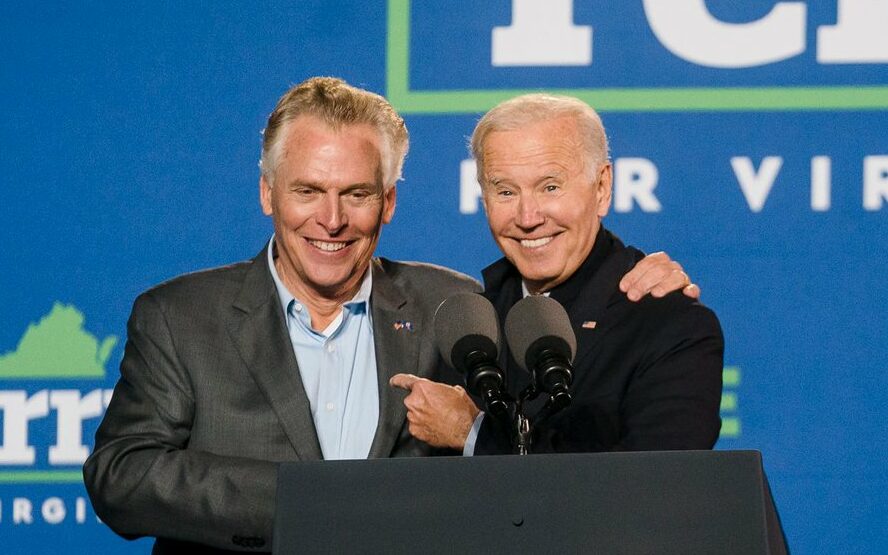 Richmond, Va. may be 600 miles south of Concord, but campaign pros say a defeat for former governor Terry McAuliffe could send a political shockwave felt all the way in the Granite State.

As recently as October 1, the Virginia Democrat was maintaining his five-point lead in polling averages over GOP businessman Glenn Youngkin in the race for governor. Most pundits were predicting McAuliffe victory in a state where no Republican has won statewide in 12 years. Given that President Joe Biden carried Virginia by 10 points just a year ago, Democrats were feeling confident.

Today, the Real Clear Politics poll average has Youngkin in the lead — though by just half a percent. And if the decade-long trend of Republicans outperforming pre-election polls continues, McAuliffe’s chances of winning a second term appear to be slipping away.

McAuliffe is certainly campaigning like he’s behind. Over the weekend, Democratic operatives at the Lincoln Project attempted a low-rent campaign dirty trick, sending operatives in costumes reminiscent of white supremacists (tiki torches included) who marched in Charlottesville in 2017. They took a photo in front of the Youngkin bus, claimed to be Younkin supporters, and shared it on social media.

Only after two of the “supporters” were revealed to be Democrats did the Lincoln Project admit the “white supremacists” were fake and their organization was behind the stunt.

The McAuliffe campaign, which widely broadcast the faked image, claims it had no role.

In a state where self-identified Democrats outnumber Republicans 46-39 percent (there is no party ID voter registration), a former Democratic governor with 100 percent name ID losing to a GOP first-time candidate would be a significant blow. The question NHJournal asked Granite State political pros: Would it be felt up here?

GOP strategist Patrick Griffin believes it would because the election in Virginia has been nationalized. “It is a referendum on Joe Biden and the policies of the left,” Griffin said. And, he adds, Youngkin is showing Granite State Republicans how to win in a purple state.

“It’s a roadmap for the GOP as long as Trump stays locked in the basement between now and Election Day,” Griffin told NHJournal. “New Hampshire Republicans should pay damn close attention to a masterclass in how to win in this mess Biden and the progressives have made.”

Jim Merrill, a strategist on both the Mitt Romney and Marco Rubio presidential campaigns, also sees a potential issue emerging from Virginia if Republicans win: Education.

“If Youngkin wins, it’s a clear message that education will be the accelerant for GOP victories in 2022. And even if McAuliffe manages to hold on, it’s still a preview of New Hampshire races,” Merrill said.

In an off-year election, voter enthusiasm can be key. Polls show Republican voters say they’re most excited about voting on Tuesday, and Democrats appear to know it. From the AP:

“Chris Hurst, a McAuliffe supporter, acknowledged the enthusiasm gap at a get-out-the-vote rally: ‘You don’t have to be enthusiastic to go to the doctor or the dentist to still do it every single year. It’s time for us to go out and do our jobs.'”

If that’s the Democratic mentality, it could mean trouble for McAuliffe.

Voter enthusiasm is one of the things veteran N.H. Democratic strategist Jim Demers says he’s keeping an eye on. “I will be watching voter participation to see if either party is more engaged and energized or if there is a depressed turnout. My sense is this being a non-presidential election, turnout may be low, so it will be interesting if either party benefits from that.”

There are some obvious commonalities between the Old Dominion and the Granite State. Both have affluent populations — New Hampshire ranks third in median household income ($88,235) while Virginia is number eight ($81,947.) Both are in the top 10 for percent of the population with college degrees. And like Granite Staters who are part of the Boston-based economy, many northern Virginia residents trek to D.C. to pay the bills. Virginia has more churchgoers per capita, New Hampshire more gun owners.

And Biden won both states, though his 7.4 percent spread in New Hampshire was slightly smaller than in Virginia.

McAuliffe and the Democrats have tried to make the governor’s race a referendum on former President Donald Trump. During his recent lap on the campaign trail for the Democrats, Biden dropped Trump’s name 24 times in a single speech, and McAuliffe’s campaign mail has featured the former president nearly as much as his GOP opponent.

“This race should be a sure thing for Democrats. McAuliffe is well known, basically well-liked, and he has plenty of campaign cash,” Rath said. “McAuliffe has looked increasingly strident and tired recently and somewhat flailing. That suggests to me their internal polling does not look great.”

“A Republican win probably says more about Biden’s weakness than it does about Trump’s strength,” Rath added.