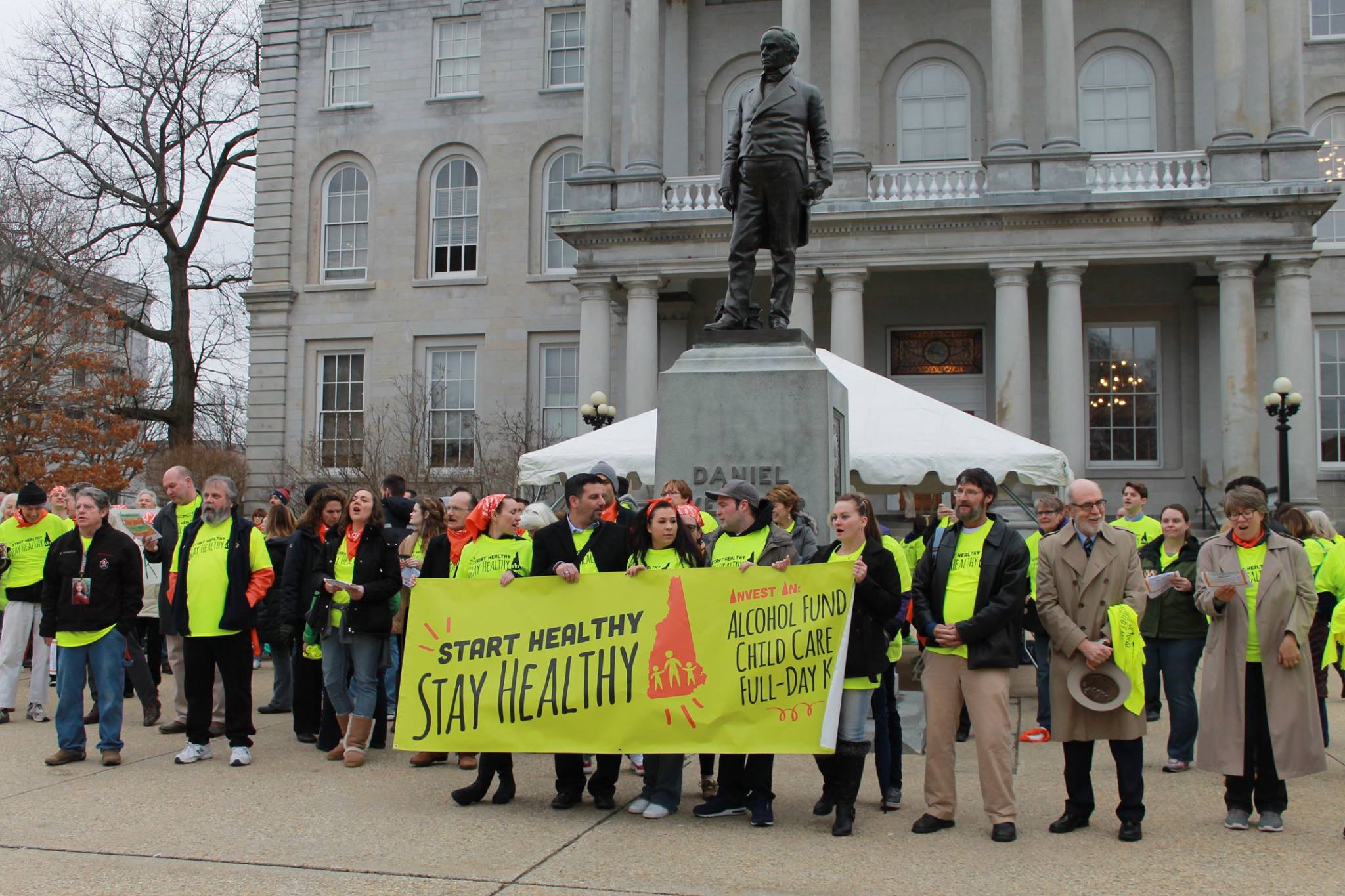 When it comes to the opioid crisis, one would expect every state dollar allocated to the epidemic would be spent. That’s apparently not exactly what happened this fiscal year. A substantial surplus remains in the Alcohol Abuse Prevention and Treatment Fund, also known as the Alcohol Fund, and lawmakers are trying to pin the blame on almost everyone.

The Alcohol Fund was created in 2000 by the Legislature as a mechanism that takes 5 percent of the gross profits from the sale of alcohol to support education, prevention, treatment, and recovery programs for substance abuse, which encompasses alcohol and drug abuse.

The focus right now for the Governor’s Commission on Alcohol Drug Abuse Prevention, Treatment, and Recovery, which gives out the funds, is the opioid crisis, but alcohol abuse is also part of its mission. The commission was allocated approximately $9 million in the 2017 fiscal year and will reportedly end the year on June 30 $2 million to $4 million in the black.

Tym Rourke, chair of the governor’s commission, said he is working with the Department of Health and Human Services to determine the exact amount and will release those figures this week.

That’s where the confusion lies for legislators as they finalize the state’s biennium budget this month. DHHS Commissioner Jeffrey Meyers has said he anticipates a $2 million surplus from contracts that didn’t use their full funds. The nonpartisan Legislative Budget Assistant is putting the number at $4.3 million. The discrepancy and uncertainty as to why the funds weren’t all used during the year was on full display during the Senate marathon budget session on Wednesday.

Sen. Martha Hennessey, D-Hanover, who also sits on the governor’s commission, questioned why there was an amendment introduced that would allocate $2 million from the Alcohol Fund for the construction of a juvenile substance abuse wing at the Sununu Youth Services Center in Manchester without the commission’s approval.

Senate Majority Leader Jeb Bradley, R-Wolfeboro, said they had to have “some frank talk” about the Alcohol Fund.

“It is pathetic that there is $4.3 million sitting in an account unexpended in the middle of a heroin crisis. That’s what we should be focused on. That’s outrageous,” he said. “So let’s look at the reforms this amendment tries to put in place … that’s called taking action, not sitting on $4.3 million.”

Hennessey countered to say that the fund would only have a $2 million surplus, but said Gov. Chris Sununu and Meyers should also be to blame.

“The governor and commissioner at HHS have not helped to facilitate the spending of this,” she said. “They are waiting to find out what kind of health care we’re going to have, what’s going on with Medicaid, all of which is up in the air. So if our governor and HHS aren’t helping to make this possible, that money can’t be spent.”

The Alcohol Fund fund has only been fully financed one time since its inception, which was in the 2003-2004 biennium — the first year it began. Since then, governors or the Legislature transferred the revenue to the general fund and would only appropriate a small amount to the Alcohol Fund. In the current biennium passed under former Democratic Gov. Maggie Hassan, the fund was financed at 1.7 percent. In Sununu’s budget proposal and in the Senate’s budget, the fund was doubled to 3.4 percent.

Rourke applauded the Senate for increased monies to the fund, but reminded lawmakers that the Alcohol Fund is non-lapsing and any money left over is rolled over to the next fiscal year, so the commission could “repurpose and redeploy those dollars.”

Rourke said he had concerns about another amendment introduced in the Senate budget that would give the DHHS commissioner the ability to take money out of the Alcohol Fund itself and not from the potential surplus.

“The [governor’s] commission has a statutory authority over the fund and DHHS administers it, based on priorities set by the Commission” he told NH Journal. “The main concern is the precedent it would give for a commissioner to take money from the Alcohol Fund, without approval of the spending plan by the Commission.”

He said the 3.4 percent funding for the next biennium is mostly going to be used to sustain ongoing investments and state contracts to combat the opioid crisis. If the commissioner can take funds at anytime, Rourke is concerned that they would have to cancel contracts and put funding for other programs at risk.

So why is there a surplus in the first place? Rourke attributes it to two factors: Medicaid and workforce issues.

When the Legislature voted to renew Medicaid expansion in 2016, treatment and recovery centers were not clear if people who showed up would be covered by private or public insurance. The commission wanted to keep the funds available to those centers in case they needed to cover their insurance costs. Rourke said contractors ultimately didn’t need to draw on those funds.

He also said the workforce crisis in the mental health system resulted in funds not being used by contractors.

“We have treatment contractors who may have been given funding and have had a difficult time hiring appropriate staff,” he said. “Obviously, you’re not drawing on that salary while you’re waiting for that hire. If you talk to providers, there is that pressure on them on hiring and maintaining staff.”

The Senate budget is likely to go to a conference committee with the House, where lawmakers from both chambers will go over the details before voting on the final spending plan. The House previously stripped money for the Alcohol Fund in its version of the budget, so Rourke said he will continue to work with lawmakers on ensuring the funds are kept in place.

The Senate Finance Committee finished crafting its version of the state budget on Wednesday. It largely resembles what Gov. Chris Sununu proposed in February, except for new business tax cuts and a multimillion dollar investment in mental health services.

“It’s a solid budget that provides what New Hampshire needs,” said Senate President Chuck Morse. “We certainly have had lists of things that we couldn’t fund, like increased funding for the university system, that we just can’t get to in this budget if we’re going to live within our means.”

One of the biggest differences between Sununu’s proposal and the Senate Finance Committee’s spending plan is the cut in the state’s business profits tax (BPT) and business enterprise tax (BET). Sununu’s budget didn’t include them.

“The budget passed by the Senate Finance Committee does not increase or create any new taxes or fees and relies on realistic revenue projections,” said Senate Finance Chair Gary Daniels. “The budget also addresses our state’s top priorities including providing resources for those most in need. This budget also includes additional business tax cuts and increases small businesses’ ability to make capital investments. This allows businesses in New Hampshire to create good paying jobs and grow their business, keeping our state competitive with other states in New England and nationally.”

The two Democrats on the committee, Dan Feltes of Concord and Lou D’Allesandro of Manchester, voted against the budget, saying several necessary programs are underfunded.

“This budget fails to fully fund full-day kindergarten, fails to fully fund our efforts to combat the opioid epidemic, and fails to adequately meet the needs of those suffering from mental illness,” D’Allesandro said. “Make no mistake, this is not the budget I wanted and I will continue to work to ensure that the critical needs of the people of New Hampshire are met.”

The Senate Finance Committee’s budget leaves out money for full-day kindergarten, which Sununu included in his proposal. Those funds, though, are part of a separate bill making its way through the Legislature.

The budget also calls for more than $17 million in spending to increase the number of mental health beds and expand mental health services. That measure was not in Sununu’s budget, but he supports it. It also increases funding for additional social workers and supervisors in the Division for Children, Youth and Families (DCYF). The Alcohol Fund is seeing an allocation of 3.4 percent of revenues, which is up from 1.7 percent in the current budget.

“We addressed our state’s most critical needs, including programs to benefit families with a disabled child and adding 60 new beds and community treatment options to relieve the growing mental health problem,” Daniels said. “We also doubled the Governor’s Commission on Alcohol and Substance Abuse Prevention, Treatment and Recovery to bring new resources into our communities combating the heroin crisis. We also made sweeping changes to the leadership at the Division of Children, Youth and Families and added more caseworkers to ensure our kids’ best interests are being taken care of and they are protected abuse and neglect harm.”

The Senate Finance Committee budget also approves the use of $2 million in unspent money from the 2017 Alcohol Fund for renovations and construction of a youth substance abuse treatment wing at the Sununu Youth Services Center in Manchester. An allocation of $250,000 per year for sexual and domestic violence prevention programs was also approved, along with $1 million in funding for 13 rape and domestic violence crisis centers operated by the N.H. Coalition Against Domestic and Sexual Violence.

Despite these additions, Feltes said the Senate GOP budget doesn’t reflect the needs of Granite Staters.

“This budget fails to include job training programs that would boost our workforce and close our skills gap, breaks promises made to our retirees and increases health care costs for our seniors,” he said. “It fails to live up to our obligations to Granite Staters living with disabilities by failing to fund our developmental disability waitlist and does not adequately deal with childhood mental health. And it fails to provide resources to reform DCYF and protect our most vulnerable children. Quite simply, this budget fails to adequately address the critical and time-sensitive challenges facing our state.”

The real test of the budget will be in the lower chamber, after conservative members sided with Democrats to sink the House GOP leadership’s plan last month. They cited an increase in spending and lack of tax cuts as reasons for opposing the budget. With BPT and BET tax cuts, it’s possible they might support the Senate’s plan, which included several provisions from the House budget.

If the state budget makes it through the House, it will head to the governor’s desk for his signature. The whole process needs to be done by the end of the fiscal year on June 30.