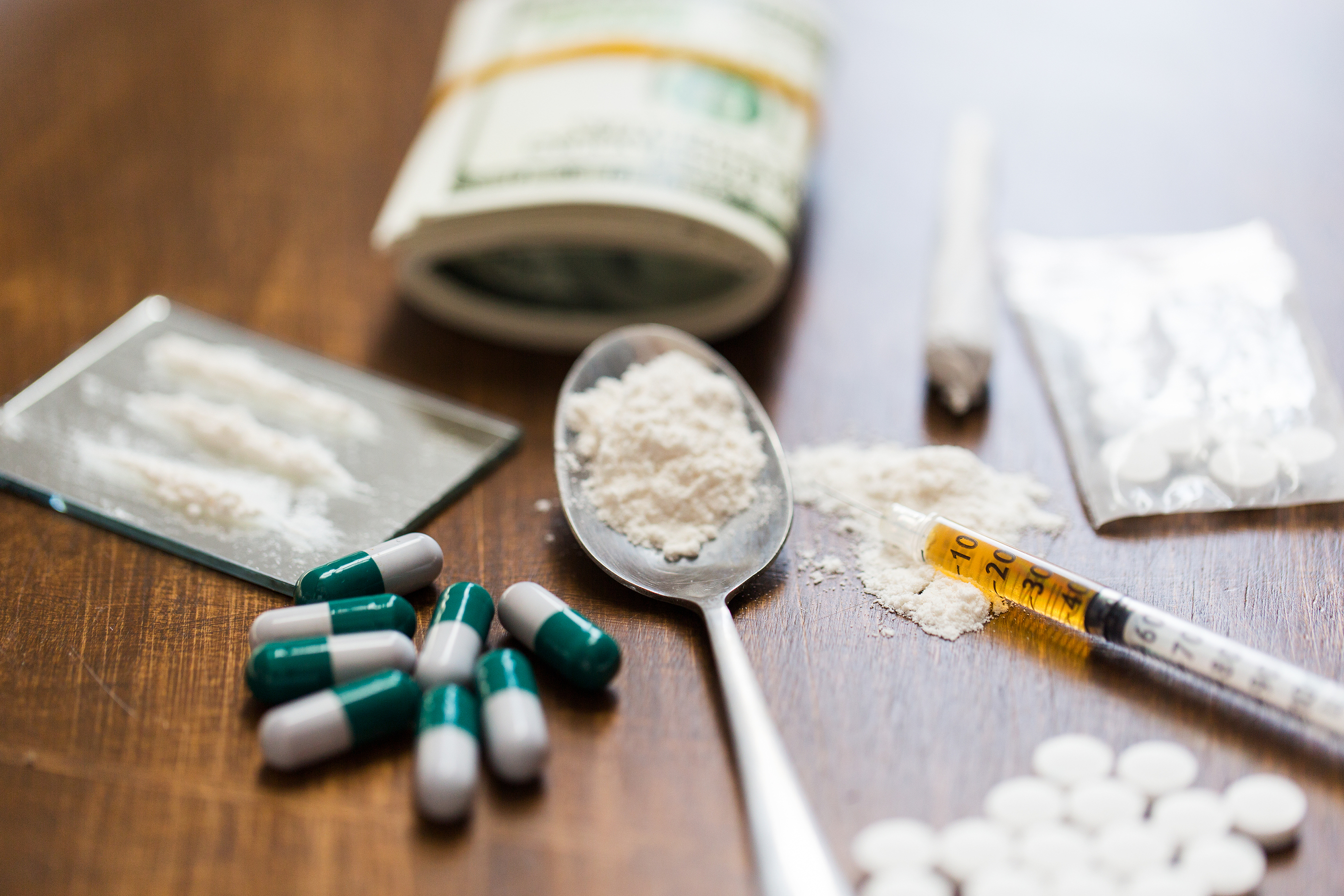 Another year is gone and New Hampshire is still one of the states hit hardest by the opioid crisis. Now, a new legislature is again trying to figure out how to curb the rampant use of opioids.

Lawmakers might be hesitant to allocate more funds to the effort, since it can appear previous funding has had little effect. But advocacy groups, health experts, and recovering addicts say money is only part of the solution. According to them, the state needs to be more flexible with how the funds are spent and amenable to creative solutions.

That was one of the themes discussed at the State House on Tuesday, where advocates asked the Senate Finance Committee to approve a bill funding the state’s Alcohol Fund.

It’s a unique mechanism created by the legislature in 2000 that takes 5 percent of the gross profits from the sale of alcohol to support alcohol and drug education, abuse prevention, and treatment programs. In the past year, approximately $19 million would have gone to service providers and recovery centers that are dealing with the opioid crisis at a local level.

The Alcohol Fund has only been fully financed one time in its history. In previous biennium budgets, the governor or legislature have transferred the revenue to the general fund and only appropriated a small amount to the Alcohol Fund.

Supporters of the bill say the fund is a creative solution the state should use because it already exists in law and is designed to aid prevention and treatment of issues like the opioid epidemic.

“I completely agree,” Kahn added. “This legislation provides an innovative solution to the real problems confronting the state.”

A similar proposal was introduced in the Boston City Council, where councilors tried to add a 2 percent tax on alcohol sold in Boston to help fund substance abuse prevention programs. The council eventually voted against the proposal.

New Hampshire’s Alcohol Fund is different. In the “Live Free or Die” state, voters wouldn’t be too happy about a tax on their alcohol (a major reason why Bay Staters cross the border). The Alcohol Fund uses revenue the state is already making from sales.

That’s the reason former state Sen. Ned Gordon, R-Bristol, authored that 2000 law establishing the fund. And while it’s focus back then was mostly on alcohol abuse and prevention, the language was broad enough to evolve over time to include other substance abuse.

“The state adopted a policy that if we are going to aggressively market alcohol, we are going to accept the consequences,” Gordon testified Tuesday. “You can’t be just committed to a treatment program. You have to be committed to a recovery, so we need more resources going to prevention and recovery. Unless you provide the funding to do it, you won’t have the capacity to do it.”

While the Alcohol Fund revenue goes to the Governor’s Commission on Alcohol and Drug Abuse Prevention, Intervention, and Treatment for their determination on what contracts, programs, and centers need the funds most, advocates said more funding could be used for New Hampshire’s Safe Station programs — another unique and creative approach to the opioid crisis.

Safe Station is the brainchild of Chris Hickey of the Manchester Fire Department. The program launched in May 2016, and anyone who is struggling with drug addiction can go to any one of the 10 fire stations in the Queen City any time and connect with recovery resources.

Anyone who visits the fire stations will go to Serenity Place, an outpatient program focusing on recovery work, or a similar center, and no one is turned away if they go through that method. Safe Station doesn’t receive any direct funding from the state, which can place limits on the program. Overall it’s seen as a success for the city, but it may still be too early to tell. Nashua also opened their first Safe Station in November.

The American Medical Response group recently announced there was a slight increase in overdoses and deaths from 2015 to 2016 for Manchester and Nashua.

Traci Green, associate professor of emergency medicine at Boston University School of Medicine, is hopeful those numbers will decrease in 2017 as the Safe Station programs expand.

“I hope this is one new entree into an expanded hub for people to enter,” she told NH Journal. “There is great hope in trying to think about how public health and public safety can work together to get people to go to a place where it’s safe and connect with other peers in a time when they’re feeling extremely vulnerable. It seems like a great working relationship.”

Green called for states to be more creative in their thinking on how to address the opioid crisis, and make sure that it fits with the individual needs of their towns and cities. She applauded fire departments, law enforcement, and public health groups taking a role in prevention, treatment, and recovery rather than one entity trying to do everything.

“The entree into treatment and recovery seem to really work in Manchester, and people can have their clear roles and responsibilities,” she said. “I think that’s really important.”

It may be difficult to replicate Safe Station programs throughout New Hampshire, since fire stations must be staffed 24/7 and have access to a treatment center or emergency shelter nearby. It’s a problem the state will wrestle with as they decide how to disburse funding to all communities.

“Manchester has available resources that a place like Concord just certainly wouldn’t have,” James Vara, the state’s “drug czar,” said in September. “So, you have to look at them and temper that with the fact that these approaches may not all work. Safe Station is a great access point for people who are suffering, but they also have available resources like Serenity Place, which many of your districts wouldn’t have.”

It’s possible Sununu could address solutions like funding the Alcohol Fund and Safe Station programs throughout the state in his proposed 2018-2019 biennium budget, scheduled for released Thursday. Sununu said the opioid crisis was the state’s top priority, and funding to fix the crisis is expected to be a significant part of his budget proposal.

Combatting the epidemic is usually a bipartisan issue, though it may depend on how creative lawmakers in the State House can get. 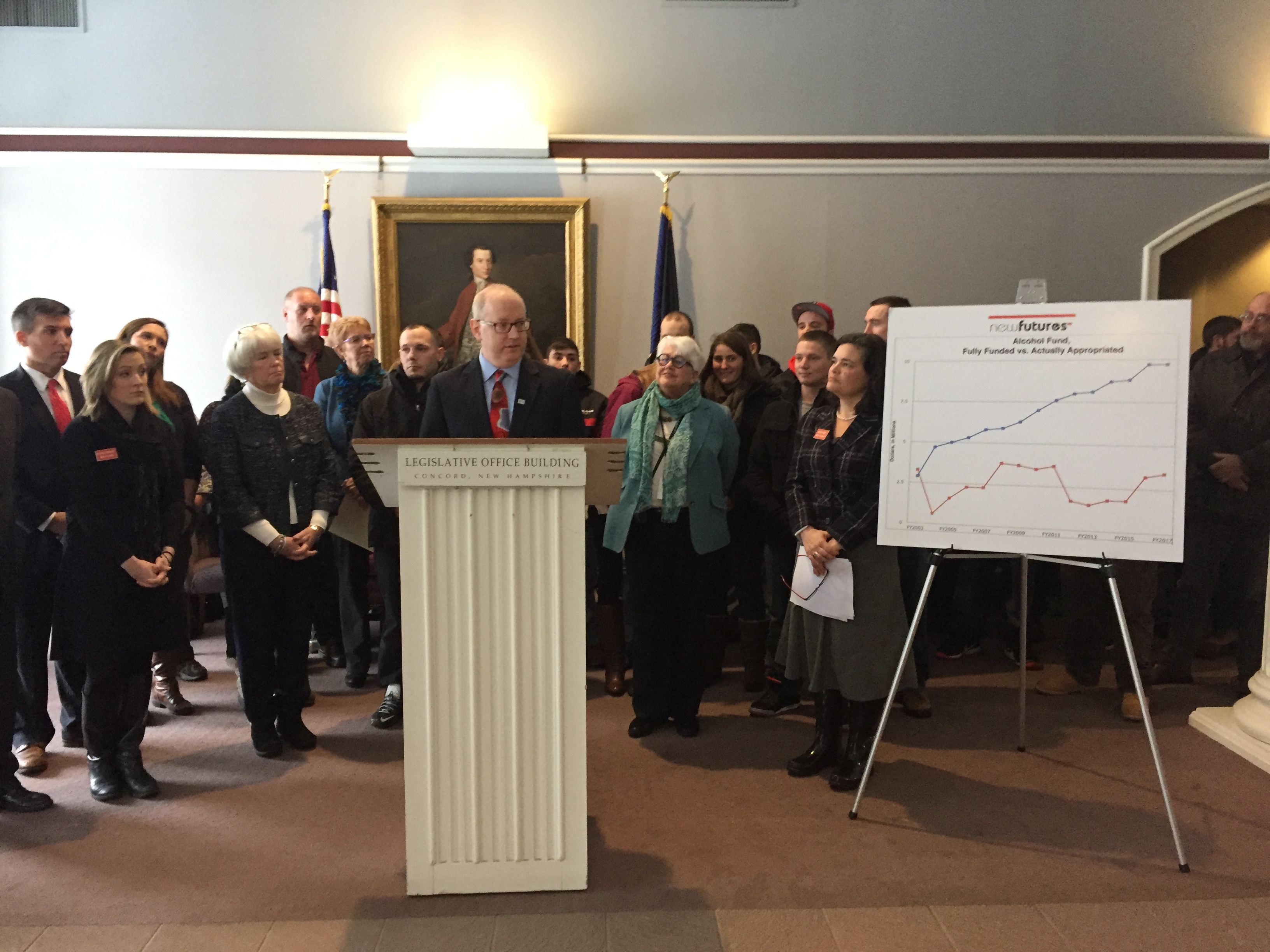 Despite several inches of snow in most parts of the state, substance abuse prevention advocates and recovering addicts made the trek to the State House to show support for a bill that would be able to fund more recovery programs in the Granite State.

“What are we waiting for?,” deputy director at New Futures Kate Frey asked at a Tuesday press conference. New Futures is a nonprofit advocacy organization looking to prevent and reduce substance abuse in the New Hampshire. According to her, the state is suffering a serious epidemic and needs creativity to get out of it.

One of those creative solutions unique to New Hampshire and endorsed by New Futures should be fully funding the state’s Alcohol Fund.

The New Hampshire Alcohol Fund was created in 2000 as a non-lapsing and continually appropriated fund to support alcohol and drug education, abuse prevention, and treatment programs. The law provides 5 percent of the gross profits from the sale of alcohol to support such programs. The funds would be allocated to the Governor’s Commission on Alcohol and Drug Abuse Prevention, Intervention, and Treatment to pay contracts for service providers in the communities hardest hit by opioid abuse.

The fund began during the 2003-2004 biennium and was fully funded in that budget. But every year since, the 5 percent funding has been suspended by either the governor or the legislature, and revenue transferred to the General Fund. In the subsequent years, the legislature appropriated only a small amount of general funds — significantly less than the 5 percent that was mandated by law for prevention and treatment.

The 2016-2017 state budget allocated only 1.7 percent to the Alcohol Fund. That total amount equated to about $6.6 million, instead of the $19 million had the fund received the total 5 percent. In the previous legislative session, lawmakers allocated an additional $2.5 million from the General Fund for prevention, treatment, and recovery in 2017, bringing the total to $9.1 million.

But a bill in the Senate would fully fund the Alcohol Fund for the 2017-2018 biennium at the 5 percent rate. At a hearing for Senate Bill 166 on Tuesday before the Senate Finance Committee, prime sponsor Sen. Jay Kahn, D-Kenne, said if the state is going to be serious about addressing the opioid crisis by focusing on prevention, intervention, treatment, and recovery, then legislators should be doing everything possible to get ahead of the problem.

“Where we invest our money is a direct reflection of our priorities, and our priorities ought to be with people in New Hampshire who need care,” he said. Kahn also called for creative ways to fight to crisis with “yankee ingenuity.”

But it might not be an easy task to convince the Legislature that this is a worthwhile endeavor.

In the last biennium budget, lawmakers approved $42 million in substance abuse funding. Former Gov. Maggie Hassan was criticized for originally vetoing the budget, delaying the appropriation of the funds by three months. The total amount was $14 million more than the 2014-2015 budget. During the legislative session, lawmakers approved at least $5 million in additional funding.

Some legislators on the Senate Finance Committee were concerned that the state has already spent a significant amount of money, yet didn’t seem to fix anything.

“If we just throw money at the problem, we don’t necessarily solve the problem,” Sen. Bob Giuda, R-Warren, said.

Gov. Chris Sununu is scheduled to release his budget proposal for the 2018-2019 biennium on Thursday, so it remains to be seen how much money he’s putting towards the opioid crisis or if he plans to fully fund the Alcohol Fund. During his bid for the corner office, Sununu and his Democratic challenger Colin van Ostern said they supported returning the Alcohol Fund to 5 percent.

In his inauguration speech, Sununu said getting the opioid crisis under control was the state’s top priority.

“I believe we need to start in the beginning in terms of our schools,” he said on January 5. “Aggressive prevention programs in our schools that start earlier, that are more aggressive. And I think we need to start bringing in the parents and the stakeholders into those programs. There is a different path for everybody and we need to be open to all the paths. We need to put resources behind our words and take real action.”

NH Journal previously reported fully funding the Alcohol Fund had bipartisan support among most of the gubernatorial candidates. And when the fund was first debated in 2000, it received widespread, bipartisan support in the House and Senate. Former Gov. Jeanne Shaheen vetoed the original legislation establishing the Alcohol Fund, but a two-thirds majority in the House and Senate overrode her veto, so it has the potential to appeal to lawmakers on both sides of the aisle.