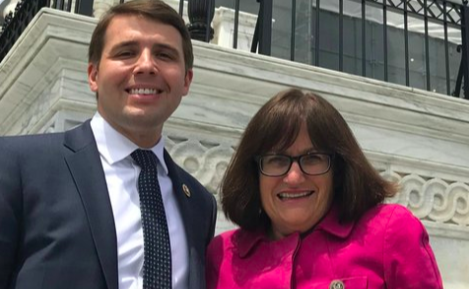 U.S. Reps. Annie Kuster and Chris Pappas have figured out how to be in Congress without really trying as the pair take advantage of COVID measures that allow them to skip voting.

House Speaker Nancy Pelosi (D-Calif.) extended the COVID proxy voting rules this week, allowing House members to skip in-person voting. The extension, which runs through to May, comes as the COVID infection and hospitalization rates have plunged nationally to their lowest levels since last July.

Since the start of the pandemic, Pappas has filed five proxy letters with the Office of the House Clerk, informing it he designated another member of the House to vote for him. Kuster has filed 13 such letters, the most recent being at the start of this month when she had Rep. Grace Meng (D-N.Y.) vote in her place.

Pappas last voted by proxy in October, though he is currently listed as the proxy voter for Rep. Henry Cuellar (D-Texas). Cuellar stated in his letter that he is unable to vote due to the ongoing public health emergency. Cuellar is also under FBI investigation and his Laredo, Texas home was raided by law enforcement earlier this year.

If their motive is to avoid the dangers of COVID-19, their move makes little sense. Washington D.C. recently announced it is relaxing COVID-19 restrictions in light of the fact the virus transmission has dropped dramatically. The city’s health department announced earlier this month that people can take minimal indoor precautions against the virus.

In New Hampshire, the virus is also in retreat, with six people currently hospitalized down from more than 400 in a matter of weeks. The Granite State is also experiencing a 2.8 percent test positivity rate, well below the highs of recent weeks.

So, why are New Hampshire’s members of Congress using COVID rules to cut work?

Kuster and Pappas’ teams did not respond to requests for comment on Wednesday.

The constitutionality of proxy voting has been challenged by House Republicans in a lawsuit filed in May 2020. That lawsuit was dismissed and by the time House Minority Leader Kevin McCarthy (R-California) appealed to the U.S. Supreme Court, many of the 160 Republicans who signed onto the lawsuit had themselves used proxies to vote. The high court declined to hear the appeal in January.

Proxy voting has been allowed in House and Senate committees, though it was not allowed for full House or Senate votes until the pandemic. Former Speaker Newt Gingrich (R-Georgia) phased out committee proxy voting in the 1990s, citing widespread abuse of the practice.

And it is not just congressional no-shows. Sen. Maggie Hassan’s Washington, D.C. office remains closed to the public, apparently due to COVID concerns. Contacted by NHJournal last week, her staff refused t0 explain why the office was continuing its COVID-era “by appointment only” policy. The phone at her office went straight to voicemail on Wednesday.

Democrats in the State House are suing House Speaker Sherman Packard (R-Londonderry) in order to have remote legislation for disabled members. House Minority Leader David Cote (D-Nashua) has not voted in Concord in two years.

But while Hassan won’t open her office, she will be attending the opening of the New Hampshire Democratic Party’s new campaign office in Manchester on Saturday. Kuster and Pappas are scheduled to attend as well.

State Democratic party representatives did not respond to NH Journal’s questions, including if special COVID precautions were being taken for Hassan and Pappas.