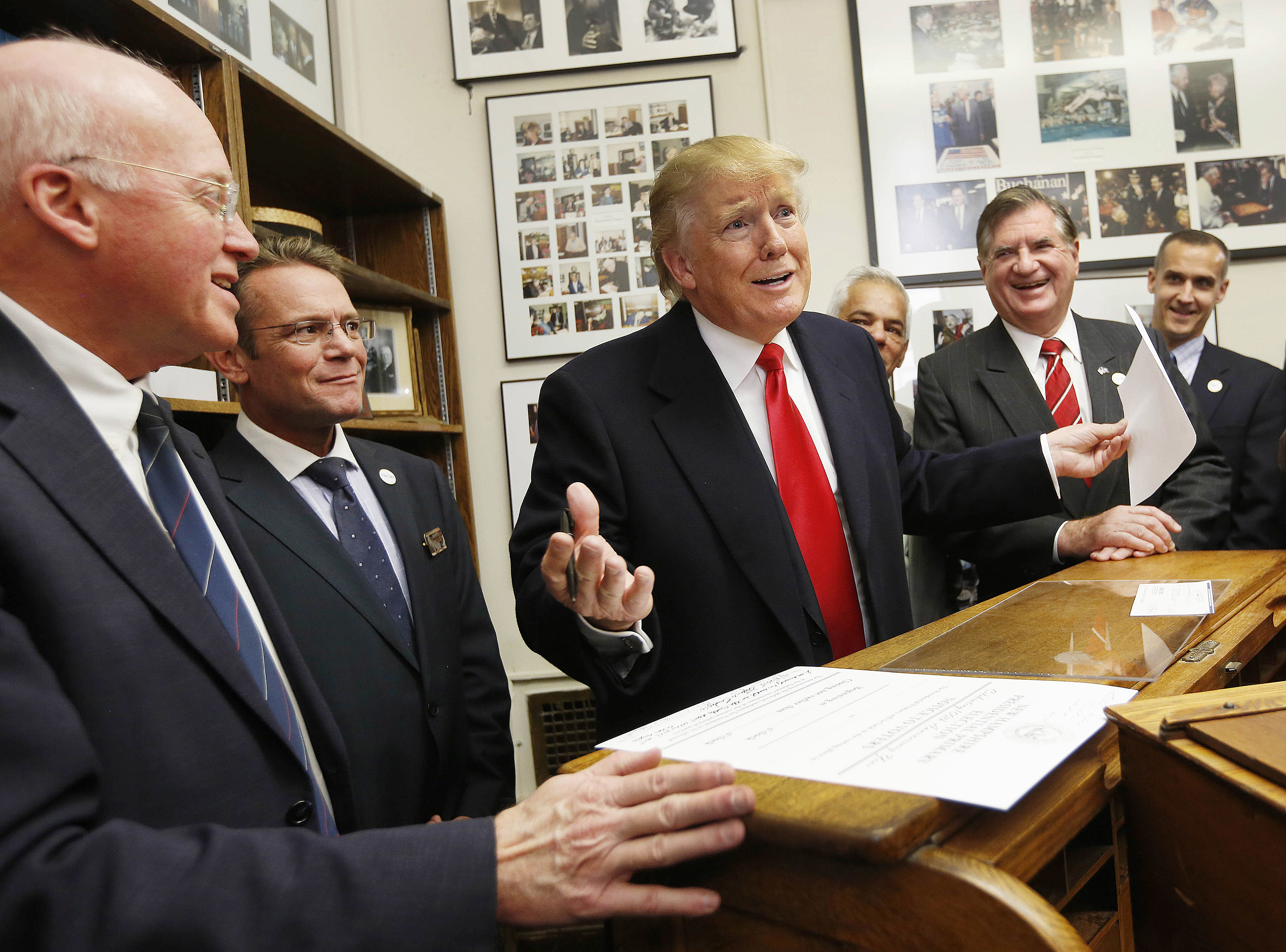 Gov. Chris Sununu and Secretary of State Bill Gardner are on board to turn over publicly available New Hampshire voter data to President Donald Trump’s election integrity commission. Before that happens though, the matter is under review by the state Attorney General and a petition is circulating the state asking the N.H. House to call a special session to deny the commission’s request.

Gardner, who also sits on President Donald Trump’s voter integrity commission, says he plans to share the Granite State’s information next week if the Attorney General’s office signs off that it’s legal. Gardner said he views the request as a way of crosschecking voters nationwide to ensure that people aren’t voting twice in future elections. His involvement in the commission has been widely criticized by Democrats and advocacy groups who call the commission’s mission a “sham.”

Sununu made it clear that the only information New Hampshire would provide is a voters’ name, address, party affiliation, and voting history, including whether a person voted in a general election and which party’s ballot a voter took during a primary election.

That information is already available to political parties and committees for a price and it should be shared with the commission, Sununu said. The statewide voter checklist can also be viewed by members of the public online, except they can’t “print, duplicate, transmit, or alter the data.” It has yet to be determined if the state will charge the federal government for access to the voter information. Private data — like birthdays and social security numbers — would not be provided by the state because it’s not publicly accessible, he said.

“I think every state should comply. Any state not complying is simply playing politics at this point,” Sununu told MSNBC on Friday. “You have to have a system that people can trust, that people can believe in. And this is simply a review to make sure that where our system is today and where it’s going tomorrow has that integrity.”

As of Wednesday, 44 states have denied the commission’s request for access to their voter information. The White House claims 20 states have agreed to provide the publicly available information and 16 other states are reviewing which information can be released under state laws.

“At present, only 14 states and the District of Columbia have refused the Commission’s request for publicly available voter information,” Kobach said in a statement. “Despite media distortions and obstruction by a handful of state politicians, this bipartisan commission on election integrity will continue its work to gather the facts through public records requests to ensure the integrity of each American’s vote because the public has a right to know.”

Democrats and some legal experts are blasting the request, questioning its legality and saying the data could be used to suppress voters and gerrymander in the future.

New Hampshire Democratic Party Chairman Ray Buckley said under state law it would be illegal for Gardner to provide private voter information. Gardner and Sununu have indicated they would not provide that information as requested by the commission.

“It is disappointing that Gov. Sununu has chosen the Trump administration’s unwarranted request over the privacy of Granite Staters,” Buckley said in a statement. “He is once again falling in line behind President Trump and pledging to hand over our highly personal information to a federal government commission created at best to soothe the president’s ego, and at worst, undermine the integrity of our elections and disenfranchise millions of voters.”

Paul Twomey, a former House legal counsel and attorney specializing in voting issues, sent a letter to top state officials in the attorney general’s office asking them to “immediately intervene to halt any transmission of voter file information to any entities associated with the federal government by the Secretary of State or his office.”

Twomey, who has also served as a lawyer for several Democratic campaigns, argued that Gardner shouldn’t be the one to determine if the state’s information is released since he was involved in the commission’s request for the information as a sitting member of the commission.

“Gardner thus is the requester and should not take part in any decisions about release of this information,” Twomey wrote. “I urge you to immediately review the applicable statutes and take action to safeguard the privacy of the state’s voters.”

Democratic Executive Councilor Andru Volinsky sent his own letter on Monday also saying the state is not required to turn over any information to the commission.

To comply with data request is to indulge & spread Trump's fantasy about massive voter fraud. NH should refuse on those grounds #nhpolitics https://t.co/FD1OCPVkCU

An online petition on Change.org was created on Monday that is requesting the N.H. House call a special session to discuss the commission’s voter information request.

“Tell the Governor and Secretary of State to deny this frivolous and intrusive request that is unacceptable and a troubling violation of the state’s laws governing public disclosure of voter records,” the petition states.

As of Wednesday, the petition had more than 500 signatures, including several from people who live outside New Hampshire.

“I have a high level of respect for Secretary of State Bill Gardner and it’s unfortunate that Representative Shurtleff and others in the Democratic Party have chosen to suggest he would divulge information that is not public,” he said. “If Democrats had a genuine concern about the availability of the data, they had decades to change the law. By petitioning for a special session they demonstrate their political motives and their disregard for the usual and customary legislative process.”

Gardner is looking at a law passed last year that allows New Hampshire to share information from its voter registration database with the Interstate Voter Registration Crosscheck Program.

Under state law, “the secretary of state may enter into an agreement to share voter information or data from the statewide centralized voter registration database for the purpose of comparing duplicate voter information with other states or groups of states.”

The law also stipulates that the state “shall only provide information that is necessary for matching duplicate voter information with other states and shall take precautions to make sure that information in the database is secure.”

The commission has yet to have its first meeting, but Gardner is expected to travel to the first gathering that is scheduled for July 19.