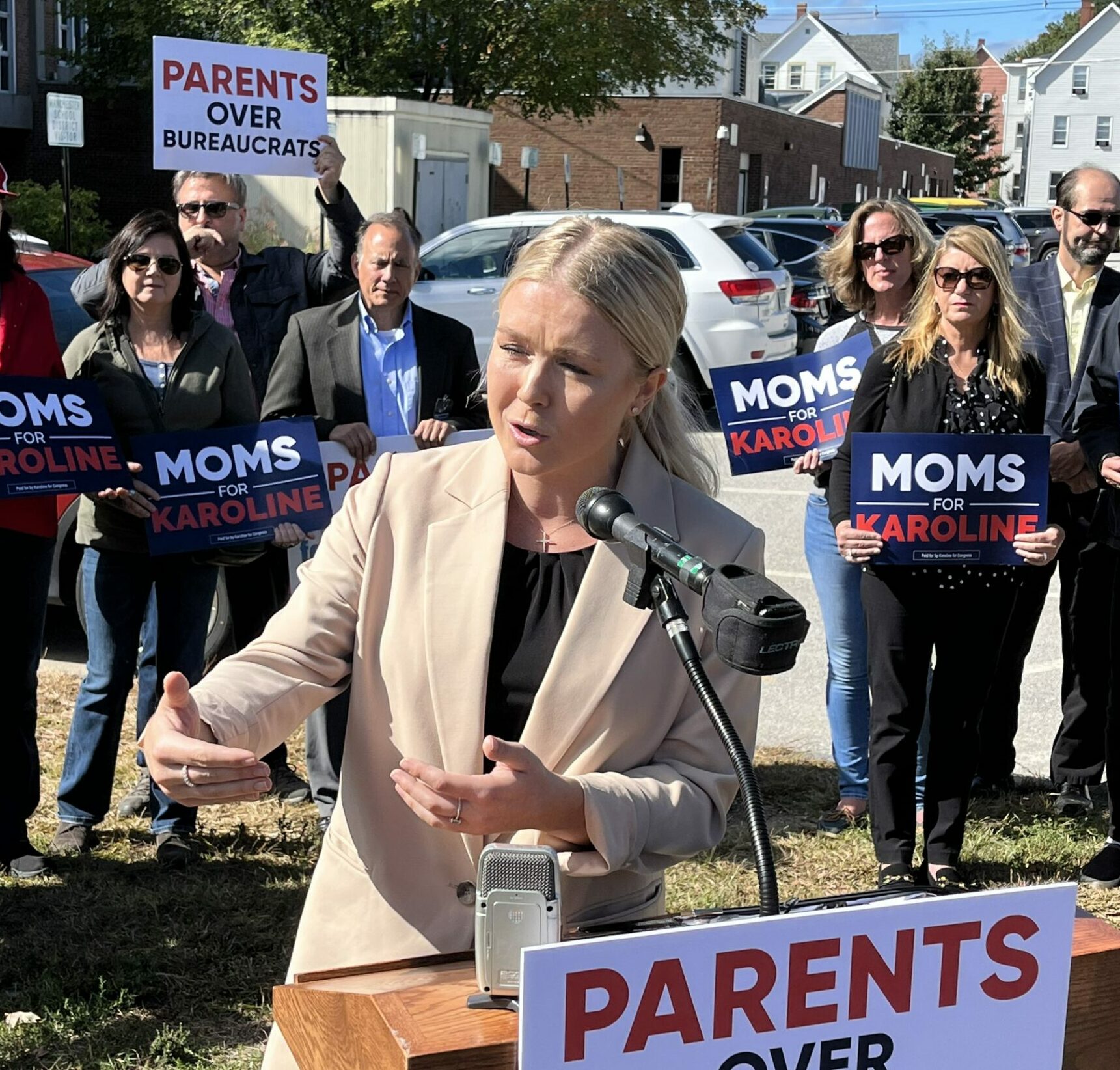 Standing outside the Manchester School District office, GOP congressional candidate Karoline Leavitt called out the city’s schools and her Democratic opponent over the issue of parental rights.

“Far left Democrats, including my opponent (U.S. Rep.) Chris Pappas, do not believe that parents have a fundamental right to know when their child is expressing concerns over their gender status at school,” Leavitt said. She was surrounded by supporters waving “Moms for Karoline” signs.

Leavitt was responding to a recent ruling by Hillsborough Superior Court Judge Amy Messer rejecting a Manchester mother’s demand she be told about her child’s behavior at school regarding gender identity. District policy forbids teachers and employees from informing parents if children adopt a different gender or engage in related behavior while at school.

Messer ruled that parents ultimately do not have the right to direct how their children are educated in public schools.

Leavitt said if elected she would push for a federal parents’ bill of rights.

Leavitt said the district’s policy is based on the false assumption that parents will automatically harm their LGBTQ+ identifying children and will not seek to do what is in the true best interest of their child.

“I spoke directly and personally with the mother who filed this lawsuit,” Leavitt said. “You know what she told me? She told me, ‘I may have lost my daughter. My daughter may have taken her own life if I was not accidentally informed that she was expressing concerns over her gender at school.’ She said, ‘Who would’ve been responsible then if my sweet innocent child lost and took her own life? She was expressing concerns over her emotional and mental health crying out for help to these teachers,’” Leavitt said.

Activists with the liberal organization Granite State Progress told NH Journal Leavitt is wrong to champion parents’ rights over the school’s policy to keep gender identity secrets. Children who identify as transgender or some other variation of LGBTQ+ run the risk of parental violence when they come out, said Sarah Robinson with the organization.

“We believe that students deserve to go to school to learn in a place of belonging. And as a mom myself, I believe that my children deserve to be valued in whatever space they step into. And we know that coming out to parents is a big decision for students and teachers and educators and staff of schools. Interrupting the parent-child relationship is not the way this conversation needs to go,” Robinson said.

Asked what other information teachers should keep secret from parents about their children’s behavior, Zandra Rice Hawkins, executive director of Granite State Progress, deflected the question. Instead, she claimed most parents in New Hampshire support Manchester’s policy of secrecy, based on the most recent school board election results.

“Here’s the deal: We had school board races up and down New Hampshire in the spring, and the candidates who came out on top were those who supported all kids in the classroom. And parents who are involved in their children’s lives and create supportive, loving environments at home. Their kids come to them and talk to them. And kids who do not have that at home need to be safe and supported and firmed in the other spaces they are in,” Rice Hawkins said.

Pappas declined to respond to requests for comment. However, just hours after Leavitt’s press conference he joined his fellow House Democrats in a vote to kill an amendment to protect parents’ right to know.

“Every House Democrat just voted against requiring parental notice and consent before a school provides services related to sexual orientation or gender identity,” tweeted House Republican Whip Steve Scalise (R-La.) “Outrageous. Parents have a right to know what schools are doing with their kids.”