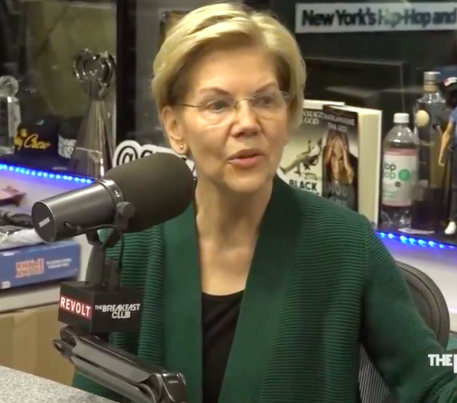 Senator Warren got stuck with it in the worst possible way: Live, on national radio, with millions of African-Americans listening and, presumably, laughing. It wasn’t a political hit from a partisan opponent; it was an observation from a morning-drive talk host who appeared genuinely puzzled by Warren’s story of why she kept calling herself an American Indian well into her fifties.

Friday morning the Massachusetts senator appeared on the Breakfast Club, a popular radio show heard on stations across the country.  One of the hosts, Charlamagne tha God (“I bust Stupid Dope Moves and Bomb Atomically”) has more than two million Twitter followers. The rest of the crew, DJ Envy and Angela Yee, add another 1.6 million or so. Not surprisingly, Democratic candidates for president who need support among black voters are desperate to do the show: Bernie Sanders, Kamala Harris, Cory Booker and Pete Buttigieg have all made appearances.

What makes the show work, and what worked against Warren, is that it’s three smart-but-typical people having the same conversations normal people have, as opposed to a stilted political roundtable where for far too many journalists, the real audience is other journalists.

And so Charlemagne the God (CTG) asked the questions about Warren’s problematic Native American claims that regular Americans wonder about but, not elite journalists.

“Why did you do that?” he wanted to know, specifically referring to Warren repeatedly declaring herself an “American Indian” (her words) in official documents throughout her career, including while a Harvard professor.

And then the roundhouse kick: “When did you find out you weren’t?”

Warren sat stunned. She stumbled. She never answered the question, instead offered a telling non sequitur: “I’m not a person of color.”

The puzzled look on CTG’s face said it all. Of course Elizabeth Warren isn’t a “person of color.” Who would look at her and think she was? “When did you find out that you weren’t” is really just another way of asking “What made you think you were?”

This has always been the unanswerable question for Warren, a white woman who grew up in the suburbs and, by her own admission, never lived a single moment of her life as a Native American.  Whatever the American Indian experience is, it isn’t hers.

As much as she tries to focus on the red herring of heritage and family lore, the real question is what made Elizabeth Warren ever think– for the purposes of official identity, legal documents, and professional status–that she was a person of color? And if she knew what everyone else knew (that she wasn’t), why did she keep claiming it?

There are millions of white Americans who’ve been told they have a black or Hispanic or Native American somewhere in their family tree, or who ping higher than 20 percent in a racial minority category on a ’23 and Me’ test.  But unlike Liz Warren, they’ve never filled out a form claiming minority status.

Which led CTG to his devastating verdict: “You’re kind of like the original Rachel Dolezal, a little bit.”

Trump’s “Pocahontas” line is merely a lame joke. (Actually, it’s not even that. The real joke is the “Fauxcahontas” nickname she earned during her first Senate campaign.) “Rachel Dolezal,” on the other hand, is a description. It’s an indictment of Warren’s difficult-to-defend behavior regarding her identity.

In a political moment when voters crave authenticity, Elizabeth Warren may or may not be able to pass herself off as a Native American. But she has no hope of passing herself off as authentic.