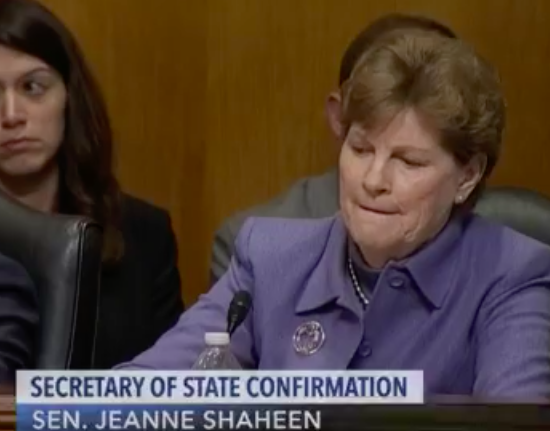 New Hampshire Senator Jeanne Shaheen took issue with GOP suggestions that Democrats who voted unanimously against Mike Pompeo’s nomination to become Secretary of State did so for purely partisan reasons.  Republicans like Sen. Marco Rubio (R-FL) pointed out that highly-partisan Democratic nominees with views Republicans didn’t support still received the support of Republicans.  Sen. Hillary Clinton, for example, was approved to be Secretary of State by a vote of 94-2.

Senator Shaheen objected to these arguments.  “I’m not going to re-litigate Mike Pompeo’s qualifications,” the clearly annoyed senator told the Senate Foreign Relations committee on Monday. “I don’t think it’s in any of our interests to question each other’s motives and question how we made a decision, and for what we view as our responsibilities on this committee.”

“You [Sen. Rubio and other Republicans]  talked about the number of nominees who had very high numbers of votes from the Senate. There are a number of people I can think of who this president could have nominated who I would be very happy to vote for.”

Shaheen then joined the other Democrats on the committee in a party-line “no” vote.

Sen. Ron Johnson (R-WI) spoke after Sen. Shaheen and called the Democrats’ rejection of Pompeo “a deeply partisan action.”  He also disputed Shaheen’s claim that Democrats were willing to support a different Trump nominee for Secretary of State:

“I’m just going to ask my Democratic colleagues… given the qualifications of this nominee, what nominee would you vote ‘yes’ for? I don’t know what nominee would pass muster for you, so I have to say collectively–not questioning any individual’s motives–collectively, this is a deeply partisan action and it is very disappointing.”