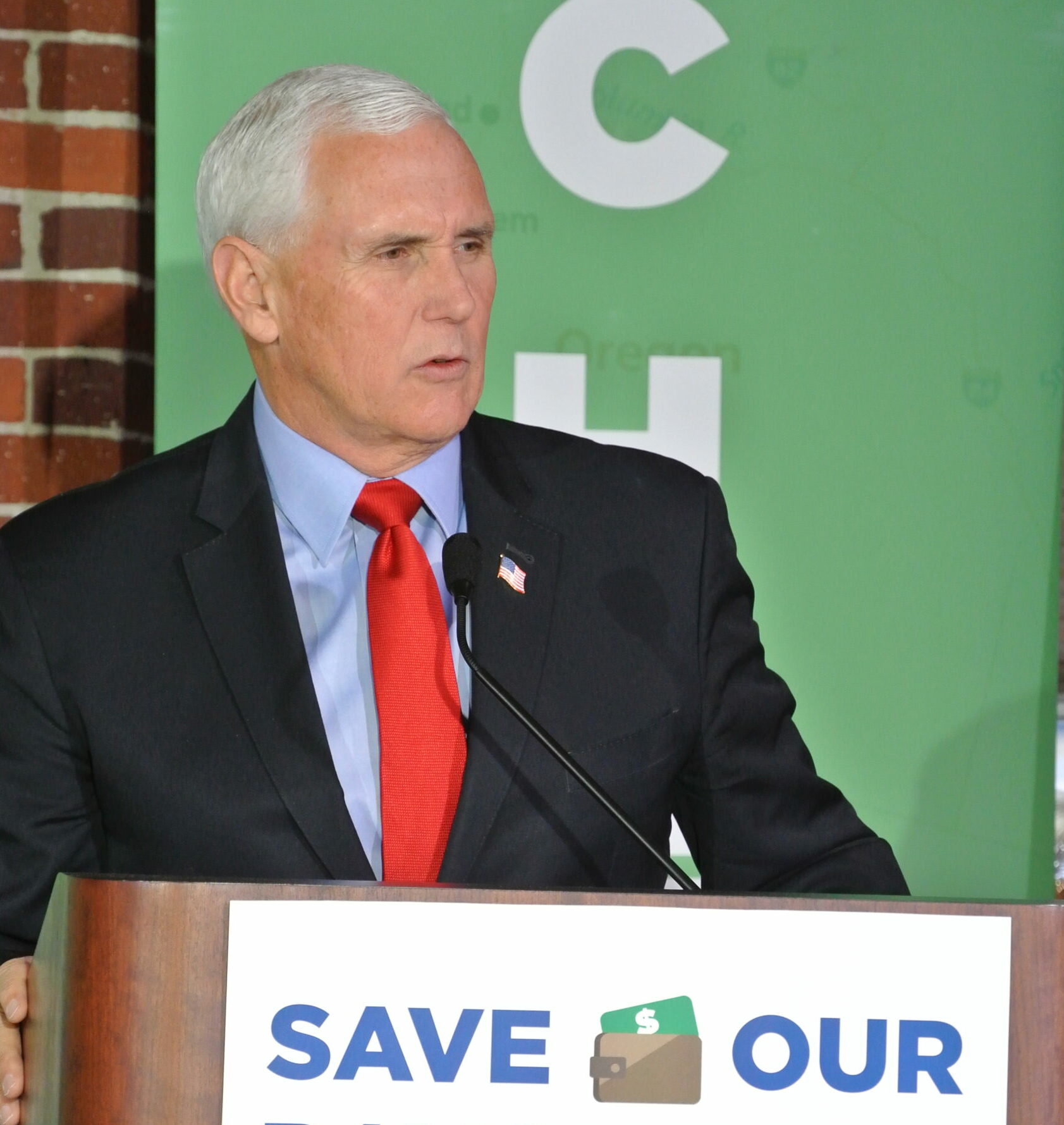 MANCHESTER — Mike Pence kept saying during his trip through New Hampshire — on a chilly Wednesday in December where he was followed by national media — that he isn’t running for president.

At least not yet.

The former Vice President is looking to help elect Republicans in the 2022 mid-term races as part of an effort to push back on President Joe Biden’s economic agenda. After that, he might be open to the possibility of his own presidential run.

“Now more than ever, every American should be focused on the 2022 elections, and that’s where we’re entirely focused,” he told CNN’s Michael Warren. “Come 2023, we’ll do what my family always does; we’ll reflect, and we’ll pray, and we’ll go where we feel we’re called.” 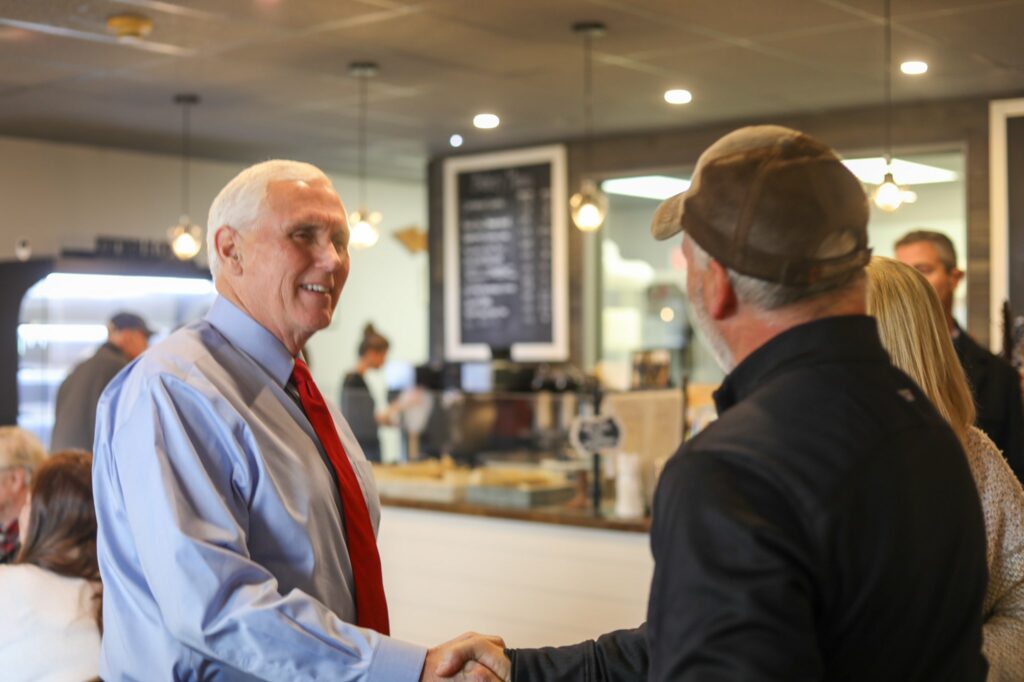 Pence certainly looked like a presidential candidate, calling into local talk radio shows and making a half-dozen campaign stops in a single day. In between a morning stop at the Simply Delicious Bakery in Bedford and a state senate fundraiser in the evening, Pence was the featured speaker at a Heritage Action for America event in Manchester. He talked foreign affairs, national security, and what he called out-of-control Washington spending. Heritage Action is the political arm of the conservative think-tank Heritage Foundation, and boasts millions of grassroots volunteers who stand at the ready to get behind the right candidate.

Pence took aim at Biden’s foreign policy, calling the withdrawal from Afghanistan a disgrace that damaged the country’s standing. That loss of standing could be setting the stage for another disaster in the Ukraine, where Russian troops appear ready to invade.

Pence said Russian President Vladimir Putin’s attempt to invade Ukraine will need to be met with military force. That means the U.S. needs to start arming the Ukrainian military, as President Donald Trump did.

“(The Obama-Biden Administration) sent blankets and military meals in boxes, but we sent arms to Ukraine so they could defend themselves,” Pence said. “I met Vladimir Putin. I saw what he did in Crimea. I think it is going to take action [to stop an invasion],” Pence said.

Pence also teed off on Biden’s Build Back Better spending plan, which he dubbed ‘Build Back Broke’ after several tries at a slogan. He said the spending plan would shift America into a socialist society, and it needs to be stopped. 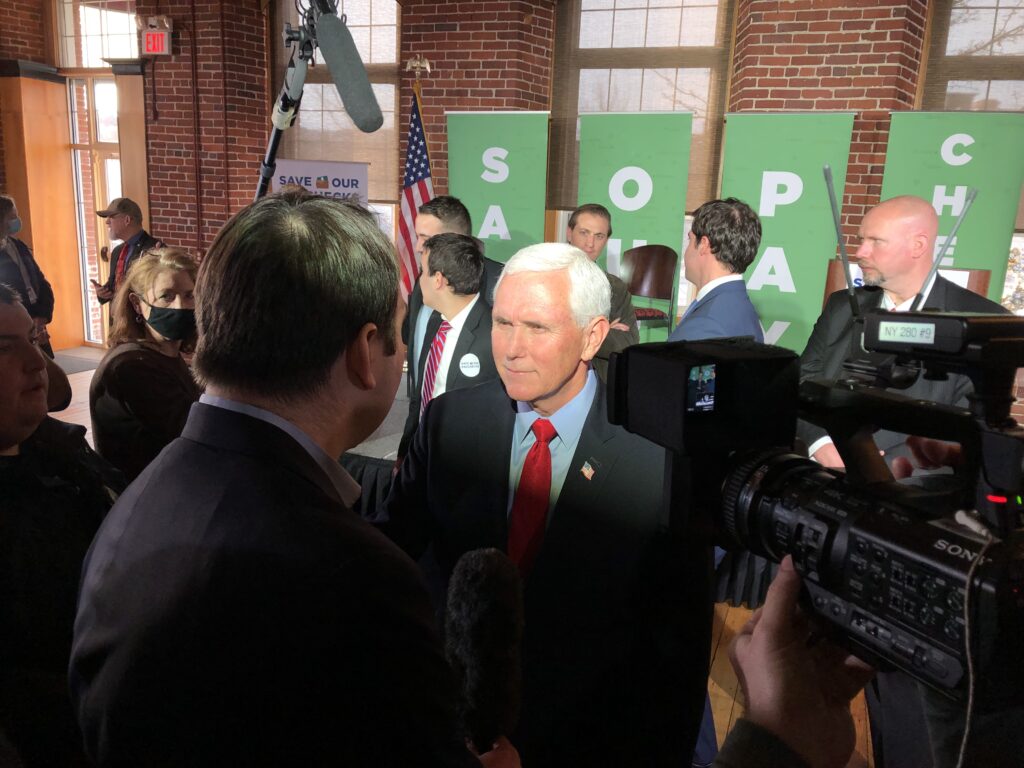 “It would be an unmitigated disaster for American families and American workers and I came to say we’re not going to let it happen,” Pence said. “We gotta shut down their big-government, socialist agenda right now.”

Pence made several stops in New Hampshire, including The Riverside Room, a small venue in Manchester’s mill district. The capacity crowd was made up of party insiders like New Hampshire GOP Committee Chairman Stephen Stepanek, and congressional candidates like Jeff Cozzens and Matt Mowers.

Mowers said Pence could be a strong contender in the 2024 race, but he’s not going to commit to any candidate, yet.

“It depends on who gets on the race,” Mowers said.

And the “who” on everyone’s mind at the campaign events is former President Trump, who injected himself into Pence’s Granite State appearance. His Save America PAC released a statement during Pence’s visit referencing the 2020 election. It linked an interview Pence gave CBN News in which he said he believed there were “irregularities” in the 2020 election. It’s a comment he’s made several times in the past, though he also says he did the right thing certifying the election.

“Good man, but big mistake on not recognizing the massive voter fraud and irregularities,” Trump said in his press release.