How Democrats Who Refuse Compromise Could Wind Up Hurting Their Party 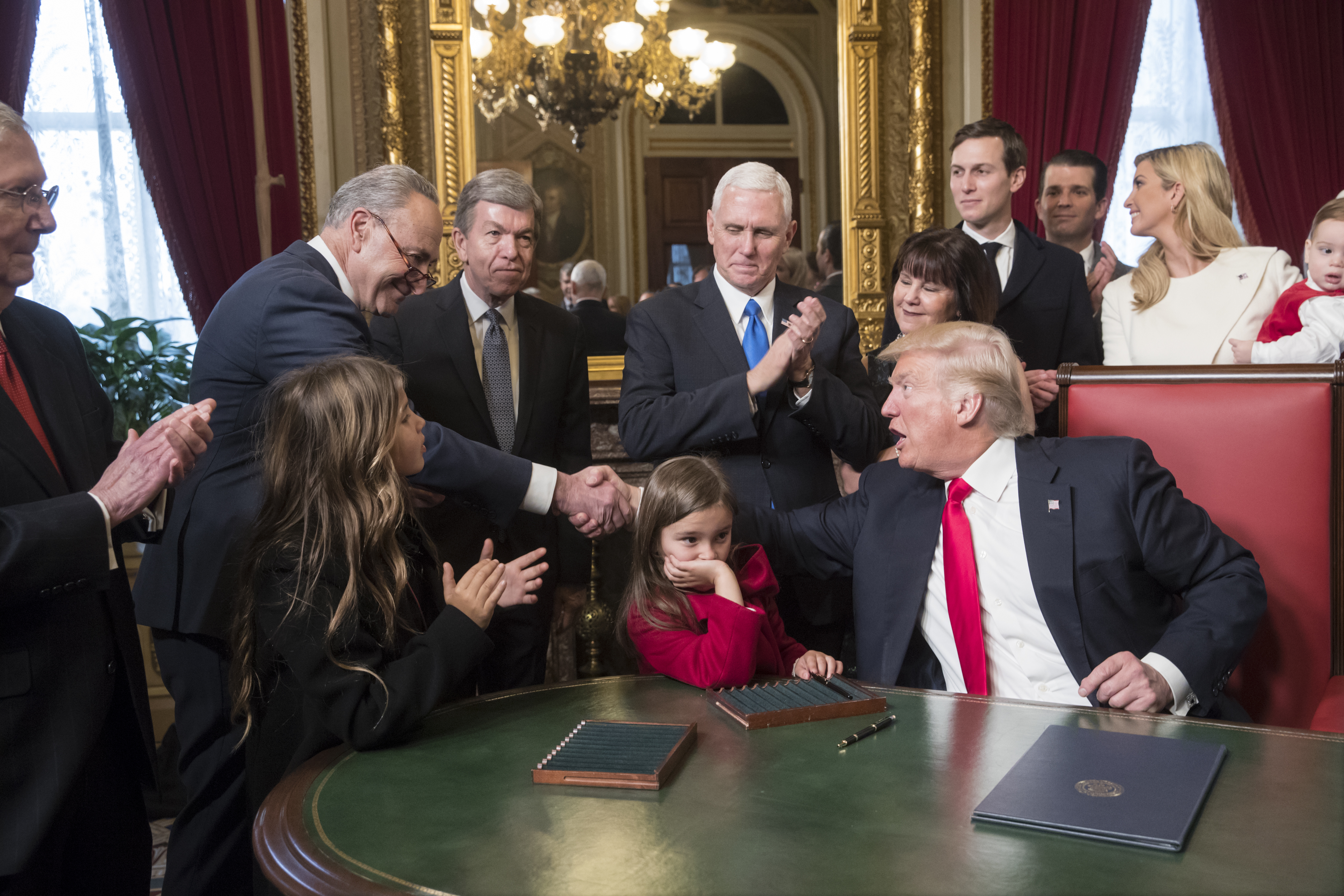 There are 19 groups in New Hampshire that have signed on to completely resist President Donald Trump, and they’re trying to take a page out of the Tea Party’s playbook.

A new national organization called “Indivisible” is going back to the basics: push back against Trump from the grassroots level. The group published a manifesto, essentially a manual on how to resist the Trump agenda, written by former Democratic congressional staffers.

“We examine lessons from the Tea Party’s rise and recommend two key strategic components: A local strategy targeting individual members of Congress; a defensive approach purely focused on stopping Trump from implementing an agenda built on racism, authoritarianism, and corruption,” they wrote.

Indivisible, which has more than 2,400 local groups registered with them, is advising voters to assemble at the local level and have members focus on their respective elected senators and representatives by speaking out at town hall meetings, asking their elected officials questions at local photo-ops and ceremonies, showing up at their district offices for meetings, and overwhelming their phone lines with coordinated calls.

“We can all learn from their [the Tea Party] success in influencing the national debate and the behavior of national policymakers,” the group wrote. “To their credit, they thought thoroughly about advocacy tactics.”

Many progressives are trying to recreate the circumstances that led to a wave of Republican victories in Congress and state legislatures in the 2010 midterm elections. Republicans gained control of the House of Representatives, gained more seats in the Senate, and flipped several state legislative seats, mostly campaigning on conservative ideals and anti-President Barack Obama rhetoric. But liberals could find it difficult to implement a similar strategy and might find more success if they work with Trump when possible.

The Democratic Party enters the Trump presidency completely shut out of power, with Republicans in control of the White House, House, Senate, and even most state governments. And they’re already divided amongst themselves with progressives versus moderates, and whether they should oppose Trump or work with him on common interests.

Just after his first week in office, it looks like many Democrats and progressive activists want to resist him at every step. The American Civil Liberties Union already filed a lawsuit challenging Trump’s executive order that temporarily bars entry to refugees from Iraq, Syria, Iran, Sudan, Libya, Somalia, and Yemen due to terrorism concerns. A federal judge granted an emergency stay Saturday to stop deportation of people with valid visas who landed in the United States.

But if they continue that mentality, they might run into some trouble in the 2018 midterm elections and even the 2020 presidential election. Even though the party in charge usually doesn’t do well in midterm elections, many House seats will still favor Republican control due to gerrymandering. And Democrats have to defend 10 Senate seats in Republican-controlled states. The political terrain isn’t favorable for them right now.

By refusing to compromise, Democrats may be unable to influence policy even when the president’s agenda aligns with traditional Democratic interests. It’s true that rejecting compromise can reveal internal differences and struggles within the president’s own party, such as with the ongoing Republican debate on repealing Obamacare. More damage could be done by working with Trump and exposing the internal divide in the Republican Party that’s been there since the rise of the Tea Party movement in 2009.

An area some Democrats and Trump could work on together is infrastructure spending, albeit with some disagreements on how to fund it. Trump will almost need Senate Democrats to help get it through Congress. Some of his ideas resemble the “big-government conservatism” of George W. Bush that upset many Tea Partiers. Working out a few deals with Trump could anger some Republicans, and it might do more damage to the president than being vehemently opposed to everything he does.

If the Democrats could unify around that message, they could be in much better shape to retake Congress and the presidency, and ultimately be able to govern themselves and the country better than before.

Uncompromising Democratic opposition is essentially saying the party wants to be more like the Republican Party, by trying to emulate what the Republicans did in 2009. But while the Republicans were “unified” by being anti-Obama anything, they didn’t take the time to rebuild as a party and create a clear message for the base. That was evident by the loss of Mitt Romney in 2012. And now, look at them. They ended up nominating a candidate who barely aligns with their platform. They have full control over the federal government, but they still are struggling to be unified over how to run it, as exhibited by disagreement over many of Trump’s policies.

While it’s understandable that Democrats and progressive activists would want to go about rebuilding their party the same way the Republicans did in 2009, it’s better for their party to engage with Trump in policy debates because those issues are ones they can build a campaign on, and not just on partisan rhetoric.

The Democrats have a prime opportunity to genuinely build their party from the grassroots level up. If the loss of Hillary Clinton in the 2016 election taught them anything, it’s that they need to listen to the working class in Middle America again and create a message that appeals not only to their base, but also to disenfranchised voters who feel left out of the system.

It’ll prove to be difficult for them to do that though, especially with some major players on the national stage that see the party going in a different, more radical direction.

Just look at the confirmation hearing battles. Several Democratic senators who are looking to run for president in 2020 won’t vote for anything put forward by Trump out of fear from attacks to their left. John Kelly was confirmed as secretary for homeland security by a vote of 88-11. Some of those “no” votes came from Sens. Elizabeth Warren (D-Mass.), Cory Booker (D-N.J.), and Kirsten Gillibrand (D-N.Y.). The more moderate Democrats might feel pressure to vote a certain way in order to follow suit, and especially when the media reports that former Democratic presidential candidate Bernie Sanders, Warren, and Booker voted one way, it could make it seem like the Democrats who don’t fall in line aren’t supportive of the party.

An unpopular Trump could win another four years if the next Democratic presidential leader is too far outside of the political spectrum.

And speaking of leaders, the race for the next chair of the Democratic National Committee is revealing to show how anti-Trump and against compromise the Democratic Party could be. While members of their party were participating in the Women’s March earlier this month, most of the 10 candidates for DNC chair were at a private fundraising conference held by liberal political operative David Brock. The message that could send to grassroots leaders is that the Democratic Party hasn’t learned its lesson from its recent defeat and instead, continues to listen to big money rather than voters.

The latest forums between the candidates have also shown that there aren’t many disagreements between them; they don’t have many new ideas to jumpstart the party, and they all have zero desire to work with Trump.

“That’s a question that’s absolutely ridiculous,” said New Hampshire Democratic Party chairman Ray Buckley at one of the forums, when he was asked about working with Trump.

If the Democrats try to imitate the Tea Party movement, don’t create a unifying message for its voters, and resist Trump at every turn, then they’re in for a long eight years.