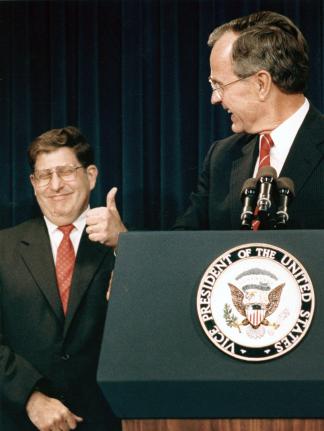 The day after President George H. W. Bush’s funeral at the National Cathedral, his one-time Chief of Staff John H. Sununu sat down with NHJournal to talk about his experiences with Bush 41, and in particular his relationship with New Hampshire. 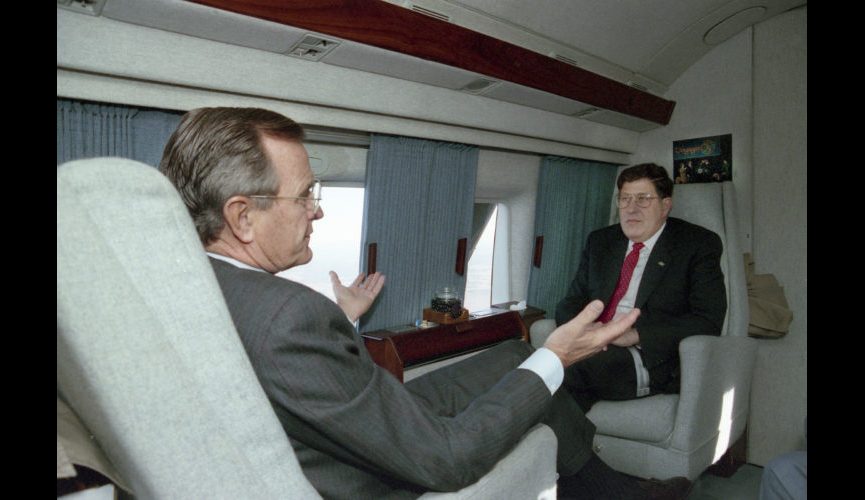 SUNUNU: I think the most interesting thing that happened with President George Herbert Walker Bush was when he came out of Iowa into New Hampshire in 1988. He’d come in third out there, and we decided we had to do everything to remind people of why they liked him before Iowa. And he basically said “John, you tell me what to do and we’ll go do it. “

So we had him going to five breakfast places a day– with a press that wondered if we were crazy or not. And he would go to a Dunkin Donuts or McDonald’s or the local diner,  and he would walk around and shake everybody’s hand and talk to them while they were eating. We went over to the Seacoast and put him in a 12-wheeler, and he drove around in that.

Then we teamed up with Ted Williams. Ted Williams was a Marine pilot and George Bush was a Navy pilot, and I don’t think they had really ever met before.  But Sam Tamposi, a developer up here, was a good friend of Ted’s and when he got Ted and the President together, they bonded immediately. Just seeing the chemistry between these two guys who had flown combat missions for the country, and the special bond that came from that, was pretty amazing.

So we took Williams and Bush north to Wolfeboro, and we did it in the teeth of a raging snowstorm. And once again, the press thought we were crazy.  But when we get to the high school, there are 3,500 people packing the place. And frankly, I thought that was one of the most leveraged political acts that we had in the ’88 campaign.

The President won the state by about 10 points but we did even better in the North Country. And that was because of his willingness to go up there and campaign with Ted Williams. Their instant bonding is something I’ll always remember. And I’ll remember that the things the press may think are stupid often turn out to be good ideas.

NHJOURNAL: What’s your most ‘New Hampshire’ memory of President Bush?

The other significant memory of him came when I had just won the primary for governor in September of 1982. As you know, we have September primaries up here.  After I won the nomination,  I picked up the phone and called the sitting vice president, introduced myself to him and said, ‘Mr. Vice President, I’m running against the incumbent Democrat up here, I need a fundraiser. Would you come up?’ And 11 days later, he was here. Wow.

We raised, I don’t remember the number,  maybe three hundred, four hundred thousand dollars, which in those days was a lot of money for a campaign in New Hampshire, and I won that election.  But my memory is the easy nature of that conversation.  In politics, those kinds of conversations can be awkward, but all of a sudden here was a guy who was willing to help out an almost stranger who was making a rather significant request of a sitting vice president.

NHJOURNAL: In the past few days, George H. W. Bush has been described as a Texas oil man and a proper New England WASP. Which one was he?

Then he goes to Texas and learns to be sort of a wildcatter, to take chances. In a way, his political career was a series of wildcat steps,  and he began to expand his personality.  You know, sometimes we in New England are a little bit insular, In Texas, it’s big, wide-open country out there.  I think he got a better sense of all of America as he developed the Texas side of his personality. 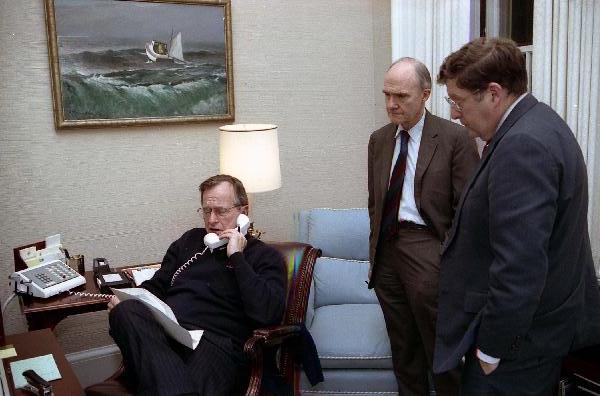 SUNUNU:  I would trace New England Republicanism back to its Boston roots, for example to Calvin Coolidge–a true conservative and in almost every sense of the word, except for tariffs. Coolidge, and the Lodges–these were Republicans who understood the emerging role of the US as a principal country, as a major player in the world.

NHJOURNAL: What was one of George H. W. Bush’s best days as president? One he really enjoyed? 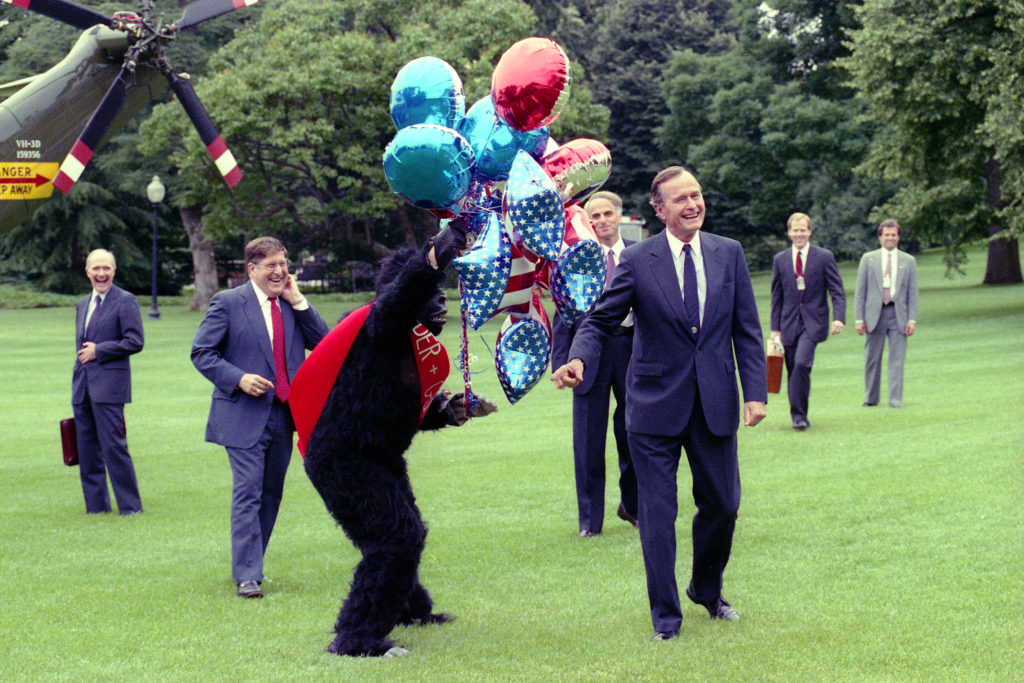 President Bush is accosted by a gorilla (played by OMB Director Richard Darman) on his 65th birthday.

SUNUNU: President Bush loved jokes. But like [Senator] Alan Simpson said at his funeral, he was a terrible joke teller. He could never remember the punchlines.

But he loved doing funny things. There was one time, we were at some NATO meeting,  or maybe it was an OEDC meeting– some meeting with all the European countries and the US and Canada.  And all the presidents and prime ministers were making their speeches, and a lot of folks there didn’t stay for all the speeches. Most people slipped out at some point.

Not President Bush.  He stays through this whole thing, which may have lasted like six hours.  And every once in awhile he would pull out a piece of note paper and, with a very serious face, write a note and hand it to me. I would take the note and look at it as though it was a serious matter of state,  something I needed to communicate to [Secretary of State] Baker or someone.  And I still have all those notes today.  Why?

Because they all turned out to be limericks he had made up about each of the speakers–and a couple had a bit of an R rating!

NHJOURNAL: What was it like to work for George H. W. Bush, the man? Do you have an example?

SUNUNU:  I served as his chief of staff for three years.  At one point it became clear to me I should probably step down. I was hoping the ‘lightning’ would follow me away from the White House, but unfortunately they kept throwing it at him.

When I did step down, George H. W. Bush wrote three very long, beautiful letters: One to my wife and kids, one to me, and one to my father and mother.  That was typical of the kind of things that he did. He knew there would be disappointment in the family when I stepped down, and the way he handled it was really the mark of the man.