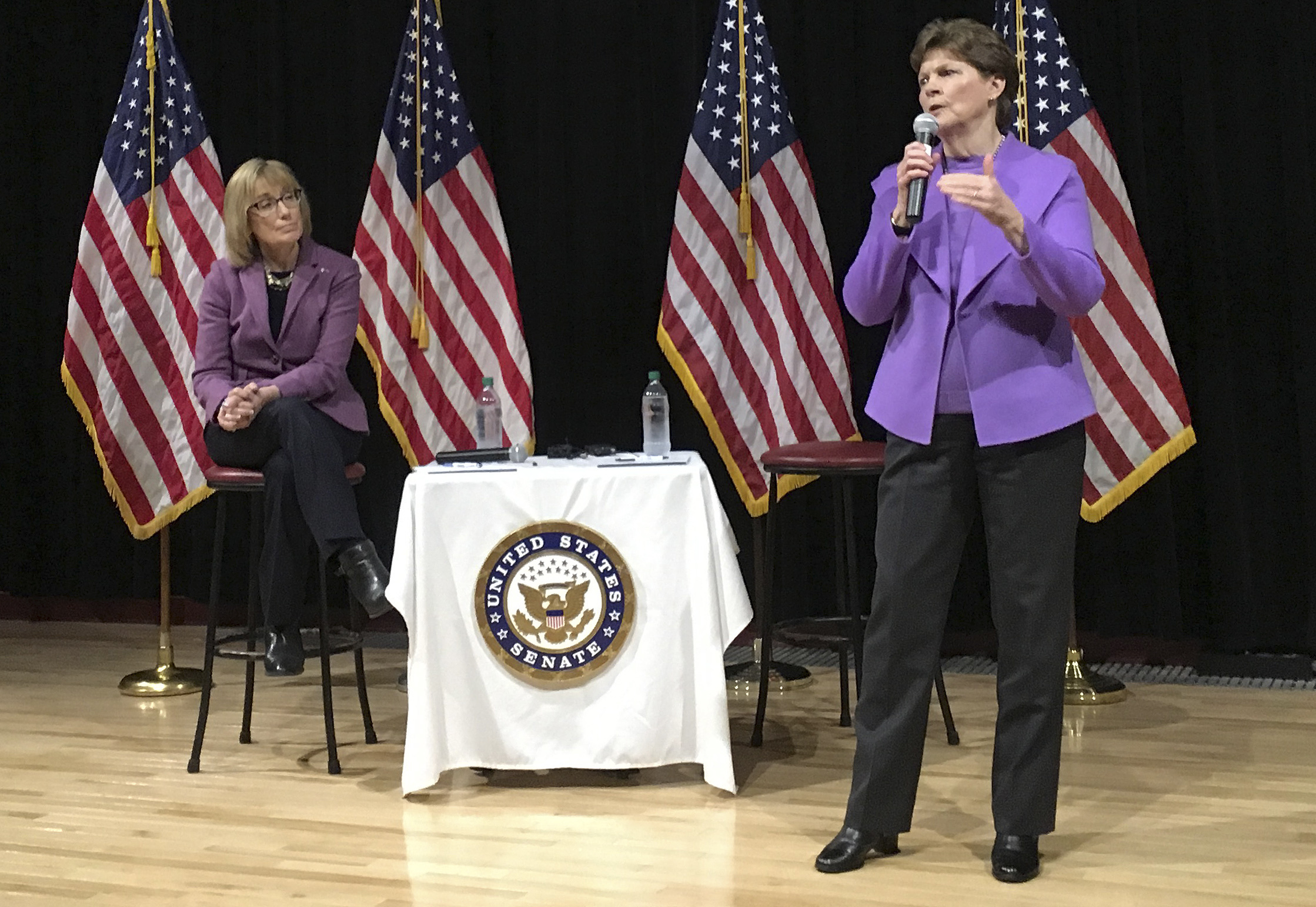 U.S. Sens. Maggie Hassan and Jeanne Shaheen’s town hall-style meeting on Friday with their New Hampshire constituents was mostly a warm welcome back to the state. Unlike many of their Republican colleagues who have dealt with protesters, shouting, and many interruptions in their town halls during Congress’ recess week, Hassan and Shaheen received very few interruptions during their question-and-answer session, receiving mainly applause during the hour-long event.

While the positive feedback from the audience showed general approval of their job so far in the Senate, the town hall also revealed that Hassan and Shaheen aren’t some of President Donald Trump’s biggest opponents in the Democratic Party.

While the two senators have made it clear that they do not approve of many policies and much of the rhetoric coming from the Trump administration, they have been more bipartisan in their approach to Trump than others.

For example, Hassan and Shaheen have both approved of seven of his Cabinet nominations and opposed seven of them. That puts them on the lower end of “no” votes in the Democratic Party, with only five Democrats and one Independent who caucuses with the Democrats having fewer “no” votes.

Senators in states that Trump won or who are expected to face tough reelections have fewer “no” votes, including Sens. Joe Manchin of West Virginia, Heidi Heitkamp of North Dakota, Claire McCaskill of Missouri, and Independent Angus King of Maine, Joe Donnelly of Indiana, and Mark Warner of Virginia. Most senators have eight or nine “no” votes for Trump’s nominees, with potential 2020 Democratic-presidential hopefuls disapproving of 12 or 11 of his appointments, including Sens. Kristen Gillibrand of New York, Cory Booker of New Jersey, Elizabeth Warren of Massachusetts, and Independent Bernie Sanders of Vermont, who caucuses with Democrats.

Both Democrats rejected the idea of blocking a hearing for Gorsuch, resulting in audible boos and shouts of “no” from the audience.

“It is not in our interest to deny a hearing to Neil Gorsuch,” Shaheen said. “That’s what’s prescribed under the Constitution. Let me tell you something. I’m not going to go out and say it’s wrong for them and then say that it’s right for us.”

Shaheen was alluding to Republican Senate leadership’s refusal last year to hold a hearing for former President Barack Obama’s nominee, Merrick Garland. Some Senate Democrats have previously stated they want to filibuster or block Trump’s nominee from ever getting a hearing, just like the GOP did to Garland.

Yet, neither senator said they have made a final decision yet on how they will vote for Gorsuch. His confirmation will require 60 votes, so some Democrats will have to cross party lines if he is to get the seat on the bench.

“I think it is absolutely appropriate and right for us to do our constitutional duty and have a hearing,” she said.

In addition to Hassan and Shaheen’s middle-of-the-road approach to the Supreme Court nominee, they have also not gone to the same extremes as other Senate Democrats when it comes to Trump and Russia.

“I never thought that I’d begin my tenure having to stand up to a president whose conflicts of interest and whose campaign and administration’s involvement with Russia would cause so many questions,” Hassan said. “I also think that it is concerning that a president who is so tough on our allies seems so soft on Russia. I think that raises real questions.”

Hassan and Shaheen have joined several Democrats who have called for an independent commission investigation of possible Trump administration ties to, and communication with, Russian officials, in addition to possible Russian interference in the 2016 presidential election. Several high-profile Republicans, including Sens. John McCain of Arizona and Lindsey Graham of South Carolina, also said they support similar measures.

“The American people need to know what happened here, and then we need to take appropriate action,” Shaheen said.

However, Hassan and Shaheen didn’t go as far as other Democrats who have publicly talked about the possibility of impeaching Trump.

Hassan told WMUR after the town hall that impeachment talk was “premature,” yet restated her support for an independent investigation into Trump’s ties to Russia.

It makes sense for Hassan and Shaheen to take a more bipartisan approach to Trump given the political climate in New Hampshire.

Democratic nominee Hillary Clinton won the state over Trump by only three-tenths of a percent — 46.8 to 46.5 percent. Hassan’s victory over former GOP Sen. Kelly Ayotte was even narrower, winning only by 743 votes, and while the Granite State sent an entire Democratic delegation to Congress, the GOP won the majority in the Legislature and took back the corner office for the first time in 12 years. Many people call New Hampshire a “purple” state, since it usually swing back and forth between red and blue every election. Hassan and Shaheen can’t upset their base too much, but they also can’t alienate the independents and moderate Republicans in the state either.

Near the very end of the town hall, Shaheen and Hassan also said they would do what they can to address climate change. Yet, some in the room weren’t happy with what they saw, including one man who shouted that the two women were using plastic water bottles, instead of reusable ones.

Hassan stated she is willing to work with Republican senators, but not at the risk of undoing progress.

“There is a difference between constructive compromise and undermining the progress that we have made,” she said.