Gen Z Was NHDems’ Seawall Against the ‘Red Wave’ 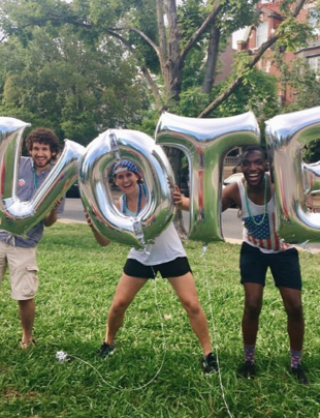 If the Democrats had a secret weapon Tuesday during their surprise showing for the midterms, it may have been young voters acting as a seawall against the anticipated “Red Wave.” And that was especially true in the Granite State.

Votes are still being counted, but instead of handily losing control of both houses of Congress as expected, Democrats may be a few seats behind the GOP in the House and have a realistic chance of maintaining the current 50-50 tie in the Senate.

They were so key to the Democrats’ success, President Joe Biden gave Gen Z voters a shoutout during Wednesday’s post-election presser.

“I especially want to thank the young people of this nation,” Biden said during his White House remarks. “They voted to continue addressing the climate crisis, gun violence, their personal rights and freedoms, and student debt relief.”

In the fight for the state legislature, Gen Z voters helped cut the size of the GOP House majority down to just 203-197 — before recounts. Republicans, like House Majority Leader Jason Osborne (R-Auburn), said they are confident their majority will hold. “The voters of New Hampshire have spoken and have sent Republicans back into the majority in the House for the 2023-2024 term,” he said in a statement.

But the final outcome will be directly impacted by the youth vote.

Democrat-aligned organizations spent millions focusing on mobilizing the youth vote. One of those groups, NextGen America, spent $25 million on the election, according to its president, Cristina Tzintzún Ramirez. Those voters were natural targets for the continual messaging on abortion and fighting extremism from the Hassan, Kuster, and Pappas campaigns.

“Young people are relentlessly committed to building the infrastructure needed to harness the full power and potential of the largest and most diverse generation in American history,” Tzintzún Ramirez said. “From abortion access to economic justice, young people recognized the stakes and mobilized to address some of the most challenging issues our country has ever faced. Young people just sent a clear message: The future belongs to us–and there’s no room for hatred, greed, or fear in the country we will continue to build.”

Part of NextGen’s plan was to find voters on college campuses, targeting 245 colleges nationwide. The group used direct mail, texts, calls, and influencers to reach close to 10 million young voters ahead of Tuesday’s election. The success was evident in Tuesday’s results.

In college towns like Durham, home of the University of New Hampshire, and Hanover, home to the Ivy League’s Dartmouth College, college students surged to the polls. The Granite State has the highest percentage of college students in its population in the country.

According to Durham officials, 1,446 people registered to vote on Tuesday, out of more than 5,900 total ballots cast. Most of those new voters were UNH students. As a result, Democrats won big. Sen. Maggie Hassan and Rep. Chris Pappas scored nearly 4 to 1 margins over Republicans Don Bolduc and Karoline Leavitt respectively.

Carson Hansford, president of the UNH College Republicans, said the state party put time and money into getting out the vote in Durham, but could not match the intensity of the young Democrats.

In Hanover, close to 800 people registered to vote on Tuesday, again mostly students from Hanover, according to town officials. Griffin Mackey, a conservative Dartmouth student with the Dartmouth College Republicans, said voter sentiment in towns like Hanover did not reflect the reality of the rest of the state. Dartmouth students largely come from wealthy families that already skew liberal, he said.

“Dartmouth students are 1) not from New Hampshire and generally do not engage with the local community beyond their campus; 2) do not pay for food or rent, and 3) do not have cars or pay for gas,” Mackey said. “How on earth could Gen. Don Bolduc, or any other conservative candidate for that matter, appeal to those students?”

According to national exit polls, 63 percent of Gen Z and Millennial voters, aged 18 to 29, voted for Democrats. Just 35 percent backed the GOP.

Bolduc focused on economic issues impacting working families, like “heating or eating,” and most other GOP candidates hit the economy, record high inflation, and soaring fuel costs as part of their campaigns. Mackey said messages about economic insecurity generally fell on deaf ears in affluent Hanover.

“This is a foreign concept for many Dartmouth students who believe that the fossil fuel industry is evil and who want everyone to be vegan,” Mackey said.