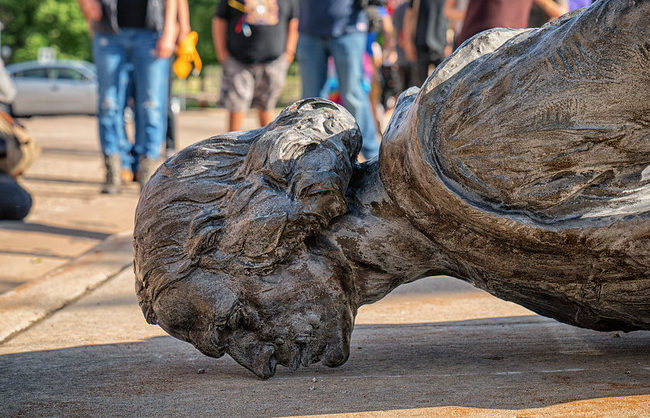 Bowing to pressure from a group of “woke” high school activists, the Portsmouth City Council voted to cancel Columbus Day.

For years, the seacoast city known for its liberal politics has recognized both Columbus Day and Indigenous People’s Day on the same date — traditionally October 12. But at Monday night’s council meeting, students with Portsmouth High School’s We Speak club for social justice activism complained that accommodating Columbus Day and the history it celebrates was intolerable.

Olivia Annunziata Blaisdell, with We Speak, called the dual celebrations inadequate and insulting. Emily Stokel, another student with We Speak, said it was time to stop honoring Columbus.

“Continuing to celebrate Christopher Columbus, who committed serious atrocities and massacres among the indigenous populations he encountered is unjust and cruel,” Stokel said.

Mayor Deaglan McEachern said the vote was about honoring the people who came before the city was founded 400 years ago. Portsmouth was home to Abenaki and Wabanaki people.

“We are a nation of immigrants, but it’s good to remember there were people here before us, especially here in Portsmouth,” McEachern.

Critics wondered why the city could not continue to observe both days, why one had to be embraced and the other excluded.

City Councilor Beth Moreau was the only no vote on the measure, saying she feared the change would be a disservice to the city’s Italian American residents.

“Christopher Columbus is a symbol of the important role Catholics have played in this country going back to before the founding,” said Michael McDonald, communications director with the Catholic League. “Attempts to cancel Columbus Day are more than just canceling the legacy of some 15th Century explorer. It sends a message to Catholics that they have a diminished role in the American experience.”

Columbus was adopted as a patron for Catholic Italian immigrants in the 1880s. The Italians connected to Columbus as they sought to be accepted as Americans. In the 1920s, Columbus Day celebrations were at times violently opposed by the Ku Klux Klan due to its hatred of Catholics.

Opponents of Columbus Day claim celebrating Europeans arriving in the New World is tantamount to celebrating slavery, bigotry and genocide. Activists like Nikole Hannah-Jones, author of The 1619 Project, have gone so far as to claim the true founding of America should be dated to the arrival of the first African slaves brought to the continent.

Historians note, however, that slavery, ritual human sacrifice and even cannibalism were practiced by the peoples of the Americas before Europeans arrived. In fact, the Abenaki and Wabanaki are believed to have taken the land they inhabited by violently driving out tribes affiliated with the Iroquois.

There is no text to the resolution, as the council was voting on the We Speak request to change Columbus Day to Indigenous People’s Day. The matter was introduced as a motion from the council to vote on as an action item.

The Order of Sons and Daughters of Italy in America has been working for years to save Columbus Day from cancellation. The group says the holiday is about celebrating the best in America.

“Columbus celebrates the beginning of cultural exchange between America and Europe. After Columbus, millions of European immigrants brought their art, music, science, medicine, philosophy and religious principles to America. These contributions have helped shape the United States and include Greek democracy, Roman law, Judeo-Christian ethics and the belief that all men are created equal,” the group states.

In an attempt at accommodation earlier this year, state Rep. Jess Edwards (R-Auburn) sponsored legislation declaring August 9 Indigenous People’s Day, to coincide with the United Nations International Day of the World’s Indigenous Peoples. Progressive activists opposed it, insisting –as the Portsmouth students did — that eliminating Columbus Day was their priority.

McEachern understands people might have different opinions about keeping the celebration, but he said removing Columbus Day does not harm Italian Americans.

“It doesn’t take away anything from anyone to recognize that to be a nation of immigrants means there were people here before us,” McEachern said.

A compromise proposal to create an Indigenous People’s Day in New Hampshire was killed by state House Democrats earlier this month, who argued honoring Native Americans was not enough.

Columbus Day, they insisted, must die.

Democrats on the House Executive Departments and Administration Committee unanimously voted HB 1173 as inexpedient to legislate, rejecting the idea of leaving both Columbus Day and Indigenous People’s Day on the calendar.

“I specifically think they are separate issues,” Ford said. “If he wasn’t a nice guy, then don’t celebrate a day for him. But don’t substitute it for another day.”

The other co-sponsor, Rep. Jess Edwards (R-Auburn), said people on the left have been trying to do away with Columbus Day in the State House for years, and some members are burning out on the fight.

“It’s an unpleasant issue,” Edwards said. “There are people who are advancing the bills who have so much anger and hostility against the United States. They use the Indigenous Peoples’ Day as a weapon.”

Edwards said his bill was a response to a progressive effort last year to eliminate Columbus Day celebrations in New Hampshire in favor of Indigenous Peoples’ Day. Edwards sees Columbus Day as a celebration of this country’s discovery and attempts to end that celebration as un-American.

“I’m a patriot. I love this country. Mankind is flawed, but the United States has done the greatest things on behalf of freedom in the world,” he said,

Horrigan wants to see New Hampshire stop celebrating Columbus Day in October and replace it with Indigenous Peoples’ Day. Horrigan bases his opinion on the historical record of the atrocities Columbus and his men committed in the New World.

“A lot of good things came out of his voyage, but a lot of bad things came too,” Horrigan said. “According to the historical record, he was a pretty nasty guy.”

However, the historical record also shows the residents of the New World weren’t perfect, either. Slavery, ritual human sacrifice, and cannibalism were all practiced by the indigenous people of the Americas long before Europeans arrived.

When Columbus landed in the New World, he and his men started taking the native people as slaves, using them as forced labor, or selling them off to slaveholders in Spain.

Andrew Bullock, executive director at the Mt. Kearsarge Indian Museum in Warner, does not take a position on when it should happen but says he believes there should be a day to honor indigenous people in America. He would like to see the Columbus Day celebrations come to an end as well.

Controversy over Columbus Day is nothing new. Columbus was adopted as a patron for Catholic Italian immigrants in the 1880s. The Italians connected to Columbus as they sought to be accepted as Americans. In the 1920s, Columbus Day celebrations were at times violently opposed by the Ku Klux Klan because of the Klan’s hatred of Catholics.

Sen. Lou D’Allesandro (D-Manchester) says he thinks it is great to have a day for indigenous people, but it can’t be Columbus Day.

“I would be totally opposed to that,” D’Allesandro said. “Columbus Day has great meaning for Italian Americans who have done so much for this country.”

D’Allesandro said the holiday is similar to St. Patrick’s Day for Irish Americans, a great way to celebrate both heritage and the American ideal.

“Italians have done very many good things in this country and stood up for this country,” D’Allesandro said.