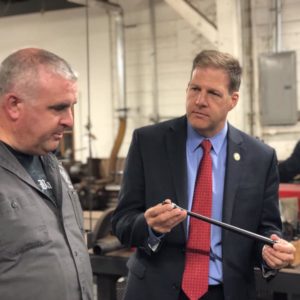 Sununu’s Insanely Hot Economy Should Be A Big Deal. So Why Isn’t It?

If pundits are looking for more evidence that partisanship is the most important motivator in American politics, New Hampshire just added another data point:

In November, the Granite State economy hit a record for the number of employed residents and a 30-year low unemployment rate…and voters threw out the Republican House and Senate and gave the incumbent GOP governor just 53 percent of the popular vote.

On Wednesday, the new jobs report revealed the highest number of working state residents ever– 763,040– and unemployment down to 2.5 percent, the lowest since August, 1988.  “Thanks to the strategic initiatives that New Hampshire has made, and our pro-growth, pro-jobs focus, more Granite Staters are working than ever before in the state’s history,” Gov. Chris Sununu said in a statement. It’s the same argument he made during the 2018 campaign, and one that his challenger, Molly Kelly, famously had no answer to.

???? BREAKING: For the first time since 1988, New Hampshire’s unemployment rate hits a low 2.5%. Well below the national average, it’s clear that we continue to set the gold standard for the rest of the country. WE ARE OPEN FOR BUSINESS! pic.twitter.com/9CorvNGZJf

“Today’s economic news continues the positive trends of the past few years relating to the labor force; demographics; migration; exports; unemployment, and capital investment,” said Taylor Caswell, commissioner of the Department of Business and Economic Affairs. “We can say with confidence that New Hampshire’s economy remains highly competitive and will continue to attract top talent and world class employers.”

All great news. No, not great: Spectacular.  And yet, the fourth-most popular governor in the country with a red-hot economy and an unimpressive opponent won an 8-point win.  If “The Economy, Stupid” rules were in effect, this wouldn’t happen.

The same with President Donald Trump. Setting aside the stock market’s end-of-year “polar bear plunge,” the Trump economy has been unbelievably strong–literally. Pundits predicted economic disaster from a Trump presidency and dismissed Trump’s talk of 3 percent (and higher) growth as unrealistic.  The growth rate in the last quarter? 3.5 percent. The quarter before that: 4.2 percent.  And the national jobs numbers are just as hot: 3.7 percent unemployment, record-high employment among minority workers and the highest annual increase in wages in nine years.

This is the environment New Hampshire Republicans must navigate, one where partisan animus overwhelms actual pocketbook performance.  Social scientists continue to be astonished by this new American moment, when the best predictor of behavior isn’t race or sex or economic standing–but partisanship.  That’s not how America has worked in the past.  The Republicans who crossed over and voted for Bill Clinton in 1996, the Democrats who stuck with George W. Bush in 2004 over national-security issues–they’re gone.  They’ve been replaced by a growing number of voters who simply vote party without seriously considering candidates from across the aisle.

Which means that, for Gov. Sununu and the Republicans who hope to re-take the state legislature or offer a serious challenge to congressional Democrats, delivering results and recruiting strong candidates isn’t enough. They have to find a way to shift voter’s views of the GOP brand here in New Hampshire.

And that’s another reason why the NHGOP’s choice of a new chairman is so important.  Creating a Granite State-friendly GOP brand is vital. Unfortunately, in a Trump-dominated political environment, it may next to impossible.