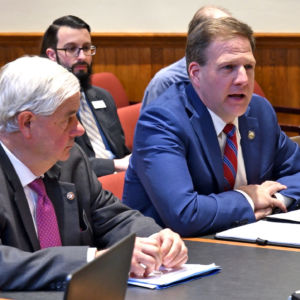 To paraphrase a quip about legendary comedian W.C. Fields, any politician who loves jobs and babies can’t be all bad.

On Tuesday, while the political world was obsessing over Super Tuesday and the shocking possibility liberal Democrat Sen. Elizabeth Warren would lose the primary in her deep-blue home state (which she did), New Hampshire Gov. Chris Sununu — a center-right Republican in a Democrat-trending state — was talking jobs and babies in Concord.

First came word that the number of people in the New Hampshire workforce set yet another record. The January jobs report showed the labor force increased by 1,610 to an all-time high of 778,190. An estimated 758,250 people were employed in New Hampshire last month, an increase of 8,650 over a year ago.

And the state’s unemployment rate, 2.6 percent, remained unchanged from December and is a full point lower than the national jobless rate. Given the tightness of the labor market and the state’s relatively small population, this growth in the workforce is a minor mathematical miracle.

Later in the day, Sununu sent a letter to the Senate Commerce Committee urging support for a bill he’s backing to require employers to give pregnant workers “reasonable accommodations.”

“We must ensure that pregnant mothers in all industries, across all races and ethnicities, have the confidence that they will not suffer from retaliation… if they request a reasonable accommodation,” Sununu wrote. “No woman should be forced out of a job or denied employment simply because she is pregnant.”

Proposing government mandates on small businesses isn’t exactly out of the “Live Free or Die’ libertarian handbook. But Sununu’s never been an ideologue. He’s a pragmatist who has a good sense of what typical Granite State voters want. Promoting benefits for pregnant women is smart politics, and it’s not like Sununu has to worry about a primary threat from his right.

Which is why his handling of the paid family medical leave is so puzzling.

Gov. Sununu made the decision to testify before the Senate Finance Committee on Tuesday, a committee whose vice-chair is his potential Democratic opponent, Senate Majority Leader Dan Feltes. Sununu, with GOP Sen. Jeb Bradley at his side, delivered his remarks in favor of his voluntary, no-tax-hike paid medical leave plan.

“I support paid leave and this bill is the only viable way to get it done,” Sununu said. “Make no mistake — the people of New Hampshire will never support an income tax. I urge all Democrats on this committee to join me in opposing an income tax by delivering this voluntary paid family leave program for New Hampshire families.”

Then, according to the Union-Leader’s Kevin Landrigan, the governor “declines to answer questions from members of the Senate Finance Committee.”

Appearing before Feltes’ committee was a moment of political theater, intentional or otherwise. Why would Sununu refuse to take questions? At best it’s a missed opportunity. At worst, it looks like the governor was on the run.

“I’ve never seen someone get out of the witness chair that fast, although, in fairness, it’s tough to defend a ‘plan’ he only created for political cover, especially when no one is there to testify in support,” Feltes told NHJournal.

Sununu’s team rejects the suggestion that the governor fled the scene, complaining that the hearing started two hours late and that the governor brought experts, including Insurance Commissioner Chris Nicolopoulos, to give answers about the inner workings of the Sununu proposal.

“Unlike the Democrats’ plan, which was crafted by lobbyists, Gov. Sununu’s plan was drafted with Department of Insurance officials,” Sununu spokesman Ben Vihstadt told NHJournal. “Those officials were on hand to answer any questions.”

Feltes says the Finance Committee hearing started on time, but there were two hours of testimony on behalf of the Democrats’ paid leave plan before they got to the governor’s proposal.

“We have the only real plan,” Feltes said. “The governor’s just giving New Hampshire the status quo. We have voluntary family leave right now, and two-thirds of Granite State workers don’t have access to paid leave.”

Democrats like Feltes are clearly trying to make paid family medical leave a political hot potato. Republicans scoff at the idea that it’s an issue big enough to wrest the governor’s office from Sununu. They ran on it during the blue wave in 2018 and they lost. Why should this year be different?

One way to make it different is to create the perception that the issue has Sununu on the run.

Jobs and babies are good issues. But they aren’t the only issues.