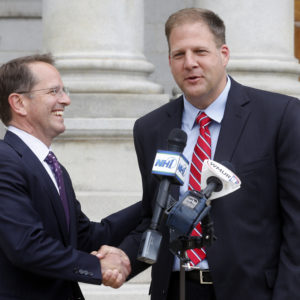 He’s been a top target of New Hampshire Democrats, but Frank Edelblut will almost certainly be around for a second term as Education Commissioner. Gov. Chris Sununu renominated his 2016 GOP primary opponent to the commissioner’s job at Wednesday morning’s Executive Council meeting. Given the council’s 4-1 GOP majority, Edelblut is considered a shoo-in.

Last June, the council rejected Terrell on a 3-2 vote as Democratic councilors united in opposition against the 30-year-old African-American nominee. Executive Councilor Andru Volinsky, who left the council in a failed bid to win his party’s nomination for governor last year, led the charge, using racist language to describe Terrell’s nomination.

Volinsky also led the charge against Edelblut’s original confirmation, targeting him for homeschooling his children and not having a formal education background. At one point, Volinsky even demanded Edelblut’s resignation, saying that both Edelblut and former U.S. Secretary of Education Betsy DeVos “have made clear their intent to destroy public education.”

Edelblut’s confirmation, easily the most contentious of Sununu’s first year in office, laid down a marker that the then-new governor would support an upending of the status quo in public education – which earned the ire of teachers unions and Democrats. The feud continues to this day, recently culminating in a week-long battle over when teachers will be vaccinated against COVID, only to be replaced by a battle over the most expansive Education Freedom Account bill in the country.

“That’s the type of opportunity this state needs, someone who’s kind of taken a different path, who understands the values, the pros and cons of alternative education,” Sununu said in 2017, referencing Edelblut’s homeschool and business background. The same logic holds for Terrell.

Edelblut’s proposals – like Learn Everywhere, a program that grants school credits to classes taken outside the schoolroom, need support on the Education rule-making Board. With Cline as chair, the SBoE has largely backed Edelblut’s plans – even implementing policies over the Administrative Rules Committee’s objections in the legislature. With his non-traditional education background, Terrell is likely to fit right in on a seven-member board that has been as out-of-the-box as New Hampshire’s Education Commissioner.

Terrell grew up in New Orleans, and Hurricane Katrina’s devastation disrupted his education.  As a result, he’s been exposed to various educational experiences — traditional, alternative, and online. Education “is something that’s very important to who I am,” Terrell told NHJournal.

“My traditional and nontraditional education experience, for one thing: Not only going to a charter school pre-Katrina, but also having to learn and graduate high school in conditions that were very much like the conditions that our students are facing today during COVID-19,” Terrell said.

With a 4-to-1 Republican majority on the Executive Council, Edelblut and Terrell’s second nomination should be smooth sailing. Cinde Warmington, Volinsky’s successor, has not shied away from challenging nominees. The lone Democrat on the council spent over an hour grilling Gordon MacDonald during a Supreme Court confirmation hearing two weeks ago.

Warmington’s reaction to the renomination of Cline and Edelblut was Volinsky-ish Wednesday.

“Both of these nominees have consistently demonstrated their intention to dismantle our public education system. Neither of them should be confirmed,” she wrote in a statement.

“Frank Edelblut has successfully forwarded policies designed to undermine our local public schools, from federal charter school funding that would divert funds from public schools, to the vastly expansive school voucher bill, HB20, before the legislature to subsidize private schools at the expense of local taxpayers.

“Drew Cline, as president of the conservative Josiah Bartlett Center, has promoted charter schools by arguing the advantage of charters ‘weeding out’ poor-performing teachers, without concern for the harm caused to students subjected to this poor instruction.”