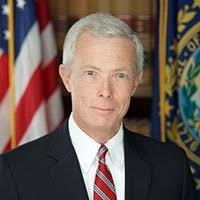 Gov. Chris Sununu announced on Tuesday he’s nominating New Hampshire Attorney General Gordon MacDonald to serve as the next Chief Justice of the New Hampshire Supreme Court, filling the vacancy created when Chief Justice Bob Lynn retires at the end of August. If confirmed, MacDonald would be the third Sununu pick to be placed on the bench, giving the governor a majority of appointees on the five-member court.

“Gordon has never been afraid to follow the path or take the action that he believes is right, even when that course may not be the easiest and even when some, including myself, may disagree with him,” Sununu said in a statement. “Our Department of Justice is stronger than ever due to Gordon’s leadership and independence, and I am confident that, if confirmed, Gordon will use his unparalleled legal talents and fair-minded approach to lead our judicial branch with distinction.”

Sununu will make the formal nomination at the Governor and Executive Council meeting on Wednesday, June 5.

In 2017 a bipartisan Executive Council voted unanimously in favor of MacDonald’s appointment to the AG’s office, and his nomination to the court was met with approval from both sides of the aisle.

“Gordon MacDonald is one of the better attorneys general this state has ever had, I hate to lose him,” Democratic state Sen. Lou D’Allesandro told NHJournal. “We win cases with him!  And he has endless energy. It’s an excellent pick.”

Ted Gatsas, a Republican member of the Executive Council, called it “a great nomination.”  When asked if he expected any opposition from his fellow councilors Gatsas replied, “You never know.”

Councilor Andru Volinsky, a Concord Democrat considering a run for governor in 2020, was reluctant to comment on MacDonald’s nomination in advance of a public hearing. But Volinsky voted (along with fellow Democrat Chris Pappas) to confirm MacDonald for the AG’s job and praised him at the time for his high ethical standards.

Given Volinsky’s ambitions, should New Hampshire expect the sort of “I am Spartacus!” hearings that U.S. Supreme Court nominations inspire down in DC? “We generally avoid the sort of partisanship you see in Washington,” Volinsky told NHJournal. “But I have pressed nominees hard in the past,” he said.

There have been some controversial nominees, however, most recently Dorothy Graham. In 2015 Graham, a former public defender nominated by Gov. Maggie Hassan (D), was rejected 3-2 by a GOP-controlled Executive Council over her handling of cases involving accused child rapists. Opponents argued that she was too aggressive in pursuing loopholes and technicalities attempting to reduce her clients’ sentences.

There are currently no dark clouds on the horizon for MacDonald. Former New Hampshire Supreme Court Chief Justice Linda Dalianis, an appointee of Democratic Gov. John Lynch, said in a statement, “I have every confidence that he will be an excellent Chief Justice of New Hampshire.”

And longtime Republican strategist Jim Merrill told NHJournal that MacDonald “is one of the smartest and most honorable men I know and we are better for someone of his caliber agreeing to continue serving New Hampshire.

“Governor Sununu could not have made a finer nomination to the Supreme Court,” Merrill said.