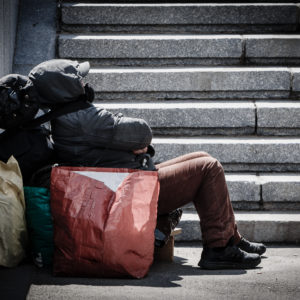 Gov. Chris Sununu spoke at the New Hampshire Conference on Homelessness at the Grappone Convention Center in Concord on Thursday morning. He addressed homelessness advocates, urging increased integration of services and communication between nonprofit organizations and the state.

The governor said homelessness affects New Hampshire despite having the nation’s highest median household income and fastest-growing economy. Sununu said homelessness involves all communities and is not solely limited to “veterans, seniors, kids or members of the LGBTQ community.”

According to data from the New Hampshire Department of Health and Human Services (NH HHS), the state has a homeless population of 1,854 individuals.

Sununu said recent natural disasters could act as a wake up call to the needs and concerns of the less fortunate in New Hampshire. The governor said he recently spoke with Puerto Rican Gov. Ricardo Rossello to discuss relief efforts in the wake of Hurricane Maria, which has left thousands without a place to live. Puerto Rico had been dealing with severe housing infrastructure problems prior to the storm, according to the governor.

Sununu said having a favorable economy is not a reason to ignore homelessness, adding there’s always more Granite Staters can do to help.

Sununu pressed for increased communication between NH HHS and homelessness advocates in order to make improvements in the approach to the issue. The governor said nonprofits could also integrate strategies and services in order to determine which practices are the best for New Hampshire.

The governor said the state’s small size plays to its advantage in the fight against homelessness. A smaller population means New Hampshire can experiment on different approaches to homelessness that larger states aren’t able to test. New Hampshire’s tight-knit community infrastructure also plays a part in addressing homelessness, which provides support to the state government from the ground up.

The governor said NH HHS received a $2.5 million federal grant this year for the Affordable Housing Fund, which is a small but positive step forward for the state.

“Management isn’t just about shoving money into one direction, a lot of states do that and spend more money than you can imagine,” Sununu said. “My point isn’t more money, it’s better management. And the best management we can get is through working with folks like yourselves.”

Sununu said the state will continue to focus its spending on quality service rather than administration, such as making sure homeless shelters are fully funded, stocked and operational. The governor said clearing up bureaucracy at NH HHS would also promote effective relief at a quicker rate for individuals facing an immediate risk of homelessness.

“I think homelessness is a winnable issue,” Sununu said. “We can end it, it is within our grasp but we need to get the resources where they need to go and we need to be diligent with our messaging going forward.”

In an interview with NH Journal, Cathy Kuhn, director of the New Hampshire Coalition to End Homelessness, said the governor brought a “refreshing” energy to the issue, echoing his emphasis on integration and collaboration between nonprofits.

Kuhn said the exact cause of homelessness is complex, ranging from mental illness, substance abuse disorder, past trauma, physical illness, to a lack of a job or education. She said it is important for the focus of providers to remain on the person as a whole rather than just the issue of homelessness. She also said providers recognize the need to work together in order to avoid duplicating services and letting people fall through the cracks.

According to Kuhn, homelessness is fundamentally a housing issue. She said the national affordable housing crisis also affects New Hampshire, where it is “almost impossible” to find housing as a low-income person. She said housing subsidies are “precious resources” for low-income individuals but added that waiting periods ranging from seven to nine years don’t help those facing an immediate threat of homelessness.

Kuhn said solutions to these problems are being discussed at the New Hampshire Governor’s Interagency Council on Homelessness. The council is comprised of representatives from a variety of fields, including behavioral health, mental health, criminal justice, faith-based services, transportation, nonprofits, and housing. Advocates on the council discuss how to collaborate, effectively utilize limited resources as well as strategize policy and funding decisions.

“The bottom line is we don’t have enough resources but those resources that we do have make it important to make sure we’re using them as efficiently and effectively as possible,” Kuhn said.