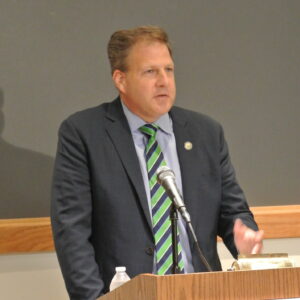 “Mandating a vaccine is not good government because once you start that, you say it’s ‘just a mandate, what’s the big deal?’ But the precedent that it sets, the path that you then open up for whatever might come in the future … Now, any governor and any individual in government can just with the swipe of a pen put some type of healthcare procedure on you,” he said.

“You have now set a precedent for decades to come. And that’s a very dangerous thing.”

Sununu said during his COVID-19 press conference, held at the St. Joseph Hospital’s Medical Arts building, that he has been in contact with other governors and state attorneys general about ways to fight the mandate. Biden’s plan is to use his executive authority to force all federal workers and contractors to take the shot. And he’s reportedly relying on an obscure, little-used rule under the Occupation Safety and Health Administration to impose the mandate on employees of companies with more than 100 employees.

A new Quinnipiac poll released Wednesday shows just how divided Americans are on the vax mandate issue, with 48 percent approving and 51 percent opposing.

The passion it inspired sent some 500 Granite Staters to the Statehouse Tuesday to protest Biden’s plan and demand state lawmakers prevent it from happening. Many in the crowd chanted “Where’s Sununu?”, who did not attend the rally.

Asked what his message is for those angry people demanding action, Sununu said the state’s options are limited.

“What happened at the Statehouse was something that the House of Representatives put together and did not involve me,” Sununu insisted. “But we’ve investigated this. There is no single state law that can stop this type of mandate. 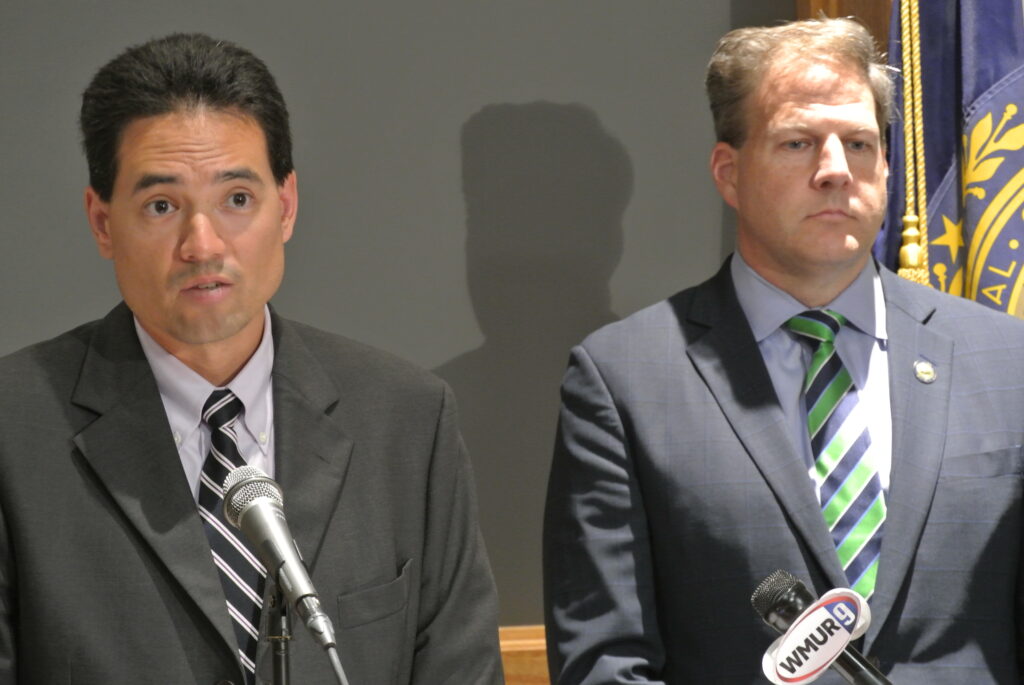 “As much as I want everyone vaccinated, there is also an understanding that individuals do have individual rights. And I do have a job to also protect those individual rights and we’ll take whatever legal action we can with other governors,” he said.

The exact details of the mandate are still being worked out, and Sununu said he doesn’t know yet how the mandate can be combated. He said Biden should have brought a proposal before Congress instead of acting unilaterally.

Sununu said the Biden administration has done a poor job managing the pandemic and a worse job communicating with the American people. Biden himself was opposed to mandates and said so a few weeks ago, but made the abrupt change out of panic.

“Republicans and Democrats have agreed that a mandate is not the way to go. Now they’re panicking and they want to change the role of government,” he said.

Sununu is trying to thread a needle on the issue as he fights against a mandate for a vaccine he supports.

“I get angry when I see a lot of people not vaccinated. I want everybody vaccinated, but that doesn’t mean that the end goal is justified,” he said.

Asked by NHJournal if he’d spoken to members of the state’s federal delegation, like Sens. Jeanne Shaheen or Maggie Hassan, about the mandate and its impact on New Hampshire, Sununu accused them of going AWOL.

“I don’t know where they are. I think all weekend, they sat silently about it. It shocked me. This is a federal issue, a federal mandate, but the majority of our federal delegation says absolutely nothing about this,” he said. “So, no, I haven’t talked to them about it. They’re not talking to anybody about it.”

New Hampshire is getting about 1,000 people a week vaccinated, but that is not enough according to State Epidemiologist Benjamin Chan.

While 756,000 people have been fully vaccinated in New Hampshire, Chan, Sununu, and Department of Health and Human Services Commissioner Lori Shibinette are expecting a surge in cases in the coming week.

“It is potentially going to be very tough times ahead for us this winter,” Sununu said.

Shibinette is going to work with local officials in towns where fewer than 50 percent of the population is vaccinated, and she will be sending in mobile vaccination vans to these communities. Sununu stressed people need to get vaccinated to stop the virus.

“Let me be clear, the vaccine is the way out. It’s the best tool we have. It works. It is safe and it is effective,” he said.

But he won’t do things like offer cash benefits or other incentives to entice people to get the vaccine. Instead, he blamed Democrats for voting against funding for a vaccine publicity campaign.

“We just had an executive council meeting today, I’ve had Democrats actually vote down money to promote the vaccine. (Councilor Cinde) Warmington voted that down. I was flabbergasted. That’s just political nonsense,” he said.

Sununu also discussed a trip he, Shibinette, Chan, and other state officials took at the end of August to Kentucky was to find out how a small state handled the delta variant surge. Its biggest takeaway was the potential for a staffing crisis as the surge intensifies.

“Healthcare workforce is not leaving employers, they are leaving the industry,” Shbinette said. “They have been working in a crisis environment the last 18 months and are getting burned out.”

The loss of an individual nurse represents a loss of years of training, education, and experience. Sununu said a nurse can always go to work for Home Depot tomorrow, but a Home Depot employee can’t start working as a nurse tomorrow.

“We still have an overworked and understaffed hospital system,” Sununu said.

Sununu does not expect the need to declare another State of Emergency, despite the likely surge in cases. Because more than 50 percent of Granite Staters are fully vaccinated, the surge is unlikely to cause the number of mortalities that it did last year, he said.

Chan said 425 new cases were reported over the last seven-day average, a 26 percent increase from the previous week, with 130 people currently in the hospital. The vast majority of hospitalizations and deaths are occurring in unvaccinated people. Less than .02 percent of hospitalizations coming happening to people who have been vaccinated, he added.