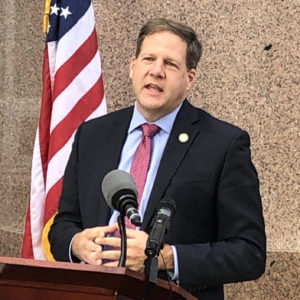 Gov. Chris Sununu tells NHJournal “our case is solid” in his potential Supreme Court fight over Massachusetts’ COVID-19 commuter tax policy — a policy he says is an assault on the New Hampshire Advantage.

“I believe the [Massachusetts] Department of Revenue’s policy is just incredibly overreaching,” Sununu said. “It strikes at the heart of the New Hampshire advantage. We are gonna stand up for all our citizens of today and tomorrow to make sure that our sovereignty is upheld.”

Since the COVID-19 pandemic shut down businesses in March, Massachusetts has been taxing the 80,000 or so out-of-state residents who commute to the Bay State for work as though they were still working within the state’s borders.

Sununu spoke to NHJournal after the official release of the state’s bill of complaint, filed with the nation’s highest court on Monday. He called the Massachusetts policy a “direct attack” on New Hampshire’s tax policy choices.

“Massachusetts cannot balance its budget on the backs of our citizens, punish our workers for making the decision to work from home and keep themselves and their families and those around them safe,” Sununu said. “We’re going to fight this unconstitutional attempt to tax our citizens every step of the way. And we are going to win.”

Sununu was accompanied by Attorney General Gordon MacDonald. “The pleadings filed today lay out New Hampshire’s argument that the tax rule is unconstitutional under the Commerce and Due Process clauses of the United States Constitution,” MacDonald said.

New Hampshire is asking the Supreme Court to do three things:

The question now is whether the Supreme Court will agree to act on New Hampshire’s request.

Asked by NHJournal if he could name another case in which the Supreme Court had ordered a state to make similar payments or refunds to citizens of another state, MacDonald said no.

The Massachusetts Department of Revenue (DOR) insists its actions are legal, and it insists it’s not doing anything out of the ordinary.

In a statement to NHJournal, DOR spokeswoman Naysa Woomer said, “The Commonwealth has implemented temporary regulations that are similar to those adopted by other New England states. The Administration does not comment on pending lawsuits.”

In an interview over the summer, Amy Pitter, president and CEO of the Massachusetts Society of CPAs and a former Massachusetts Commissioner of Revenue, said the Massachusetts DOR “wanted to create a fiction” that New Hampshire workers are still crossing the state line.

Sununu said he’s spoken to Massachusetts Gov. Charlie Baker about this issue, but to no avail. He added that his administration had proposed solutions to the dispute, but the Bay State rejected the ideas.

But Sununu also declined to blame his fellow Republican governor for the impasse.

“This is not about Charlie Baker,” Sununu told NHJournal. “Charlie Baker does a great job for a state with very different socioeconomic dynamics, political dynamics.

“This is more of an issue for their Department of Revenue that I think is just desperate to bring dollars into the state of Massachusetts. Luckily in New Hampshire, we’re not in a similar situation,” Sununu said.

The fight against the Massachusetts policy faces bipartisan opposition in New Hampshire.

“It is completely unfair to charge New Hampshire workers the Massachusetts income tax while they are not working in Massachusetts,” Sununu’s Democratic opponent, state Sen. Dan Feltes, said. “These workers are acting in everyone’s best interest when it comes to public health and safety and should not be penalized for their actions.”

Sununu also used the commuter tax fight to repeat his pitch to businesses that New Hampshire should relocate to the Granite State.

“We’re effectively the tax-free suburb of Boston. You can have the connectivity but not be taxed. You can have all the advantages that New Hampshire Advantage you’ve heard about it,” Sununu said.

“And I think standing up and fighting for this is one reason businesses and families are coming here. Because they know, whether it’s local government or state government, we’re going to have the citizens’ backs.”