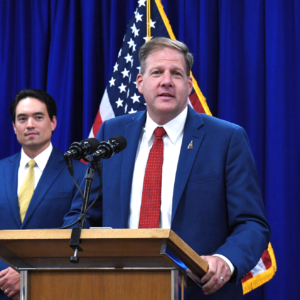 The annual inflation rate has risen 343 percent since Biden took office in January. Economists are divided on whether that will be higher or lower this time next year.

Last Friday, both Reps. Annie Kuster and Chris Pappas were part of the Democratic majority that passed the “Build Back Better” plan. Sens. Jeanne Shaheen and Maggie Hassan have expressed their support for the massive spending plan as well, though the Senate is likely to vote on a very different version of the bill.

Pappas says the spending package will “reduce the deficit” and “lower costs for families without increasing inflation.”

“The Build Back Better Act lowers costs and fights inflation because it is fully paid for by making super-wealthy corporations and the top 1% pay their fair share,” Kuster said when the bill passed the House.

Nonsense, Sununu said when NHJournal asked him about it during Tuesday’s news conference.

Sununu argued that increasing demand for materials and labor to work on government projects is going to create more competition for workers and supplies, a particular problem in New Hampshire where the worker shortage is particularly acute.

“Where is the steel is going to come for all of these bridges over the next five to 10 years? It’s going to be a bit of a challenge.”

Pappas and Kuster echo the White House bullet point that economists have evaluated the plan and concluded it won’t add to inflation.

“Independent analyses completed by both Moody’s Analytic and Fitch Ratings found that the passage of this legislation will not add to inflationary pressures that have resulted from the country’s swift economic recovery from the COVID-19 pandemic,” Pappas said.

But, like his claim the bill doesn’t add to the deficit, the facts appear to be at odds with his assertion.

In addition to Sununu’s supply-and-demand argument, economists are also concerned about adding to the money supply. Because the plan involves deficit spending, it will be paid for in part by printing more money.

“The Build Back Better plan will provide a bigger near-term boost to demand than supply,” said Capital Economics in a research note. “At a time when inflationary pressures are building across the economy, that risks adding further fuel to the fire.”

Even the economists quoted by the White House as saying the bill won’t add to inflation specifically say it will “ease longer-term inflationary pressures,” as the spending on roads and broadband increases productivity years in the future.

But as Ramesh Ponnuru points out at Bloomberg, “Several of these economists say Biden’s spending plans aimed at climate change, education, child care, housing, and many other social programs will increase inflation in 2022 by pumping more money into the economy.”

A big inflation driver heading into winter is energy costs. After months of policies discouraging energy production in the U.S. — shutting down the Keystone XL pipeline, banning energy production on federal lands, and opposing pipeline expansion — the Biden administration is now releasing oil from the strategic petroleum reserve and urging OPEC nations to pump more oil into global markets.

“They have no problem with [energy] production coming out of Russia, which has more environmental issues, but for some reason, they oppose more production here,” Sununu said.