Granite Staters planning an evening on the town need to factor in babysitting, parking, tipping — and now, handing over their personal contact information when they go out to eat.

During Thursday’s COVID-19 news conference, Gov. Chris Sununu unveiled an order requiring restaurants to track the names, time of arrival and contact details of every patron. The goal is to use the information for contact tracing purposes in the event of a COVID-19 exposure.

Thursday’s presser had Sununu striking a dour tone about the short-term future in the face of COVID, at one point warning that the pandemic is not ending anytime soon, and saying that people should be concerned when they go out.

“Yes, you should be afraid,” Sununu said. 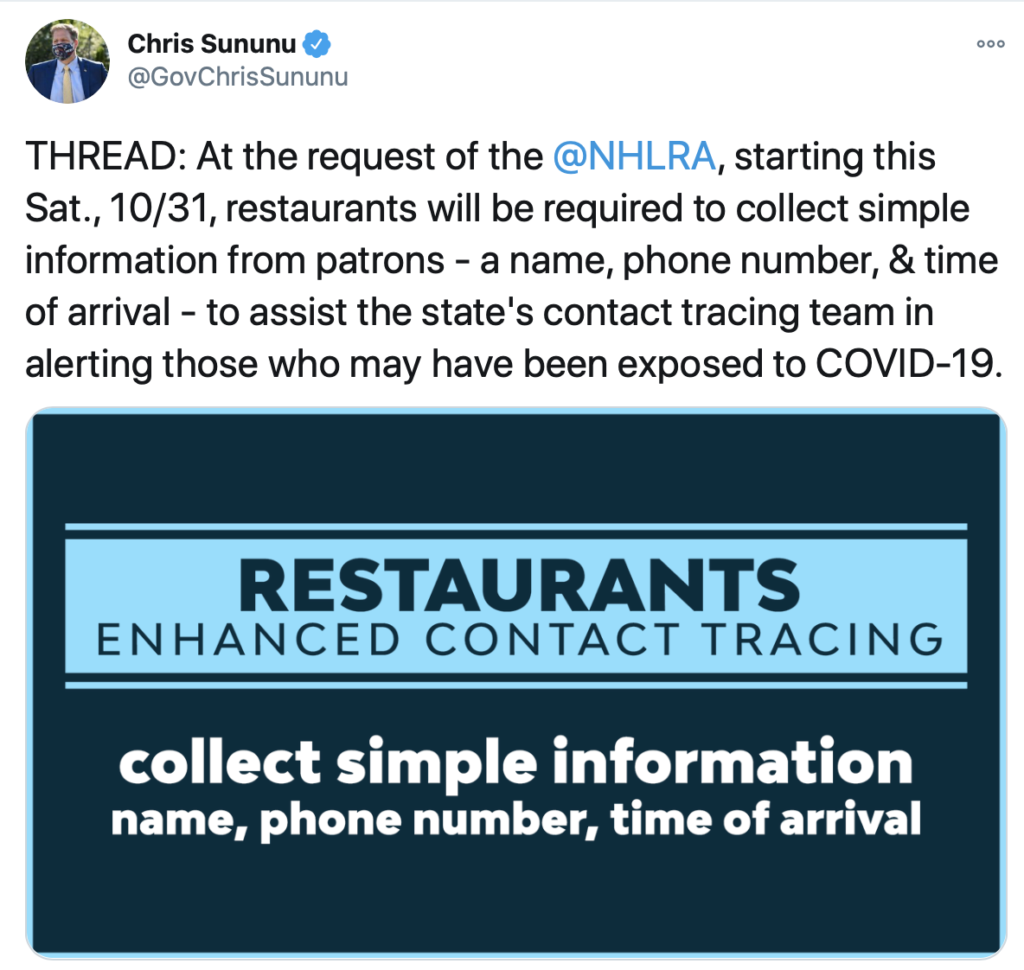 “This was a recommendation from the restaurant association,” Sununu said. “I would think they are well on board.”

Mike Somers, president and CEO of the New Hampshire Lodging & Restaurant Association (NHLRA), said the recent public notifications from the New Hampshire Department of Health and Human Services about COVID-19 exposures taking place at various eateries throughout the state is hurting business, and leading people to think eating out isn’t safe.

“That’s almost a scarlet letter for that business,” Somers said.

Sununu said the plan will allow the state to avoid issuing the notifications, as the contact tracers will already have the data they need to track any potential exposures.

“We can get rid of wider public notifications, and we can be quick and explicit in how we go about contact tracing,” Sununu said.

“I think we should have been doing it all along,” Koloski said.  “Interesting that it’s just restaurants, though, as you have just as much risk going into a store.”

Tanya Barry, general manager at Martha’s Exchange in Nashua, appreciates the state is trying to find ways for people to continue to go to restaurants while protecting the public, even as restaurants get hit with more and more regulations.

“We want to stay as safe as possible,” Barry said. “We’ll continue to do whatever the governor says.”

Restaurants in New Hampshire have mask requirements, social distancing guidelines that limit capacity, and in some locations they have to put in dividers.

However, Gov. Sununu and supporters of the mandate were vague Thursday about its enforcement.

“We’re not looking to send police out, we’re gonna rely on the restaurant association to lean on membership,” Sununu said.

Somers didn’t want to address the enforcement issue. “Can we not ask that question,” he said. “I think the state is taking a position thus far of working to educate business, and not so much issuing penalties and fines.”

But for opponents of government mandates, this is the key question. Despite Sununu’s suggestion, the NHLRA doesn’t have any legal authority over its association members.

A government edict — like a mask mandate, or a requirement that customers hand over personal information — can only be enforced by legal penalties like fines and arrests.

JR Hoell with ReopenNH tells NHJournal, “it’s amazing that we’re even discussing giving out this level of information just to go out for dinner when an amendment to the New Hampshire constitution guaranteeing our privacy was passed with 80 percent of the vote in 2018.

“As Benjamin Franklin said, ‘Those who would give up essential Liberty, to purchase a little temporary Safety, deserve neither Liberty nor Safety.'”

For some in the Live Free or Die state, this is more than a mere abstract concept. Just a week ago, Roselynn Homemade Ice Cream Breakfast and Lunch in Epping closed until further notice after owners Joe Bodge and Dorene Heselton said a customer reported them to the state over their unwillingness to enforce a mask requirement.

Other restaurant owners, however, are taking the customer tracking policy in stride.

Barry said if her staff has to enforce the state’s order, they will. Much like Nashua’s city-instituted mask ordinance, the contact tracing requirement is something she is prepared to deal with.

Koloski wants the state to clear up who is responsible for enforcing all of the new requirements on his businesses; the city or the state.

“I’ve called the Governor and emailed, but only get a generic response that ‘we hear your concern,’” Koloski said. “If the Governor wants to swing through Claremont, I would be happy to share a further list of concerns.”