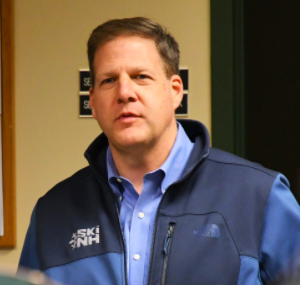 Sununu On Sununu: I Am What I Am. Expect More of the Same

After announcing that he’s running for a fourth term as governor, and not taking on Sen. Maggie Hassan next year, Gov. Chris Sununu sat down with NHJournal to talk about his decision, what it means for the GOP’s efforts to win the U.S. Senate, and what his campaign message will be in 2022.

NHJOURNAL: What is your message to the Republicans who are disappointed in your decision today?

SUNUNU: I totally understand it. On a national level, folks were hoping for that 51st vote and all that. I still think that’s going to happen. I think you’re going to get potentially 54 Republican senators and one probably from New Hampshire. I think Sen. Hassan is that vulnerable.

So the good news is after what we saw [last] Tuesday, it’s not, ‘If Chris Sununu doesn’t run, we can’t [win] control the Senate.’ Of course, the Republicans can. It’s not just on my shoulders. I think there was a lot of national buildup. That’s why I did a press conference because I appreciated the conversation that was being had. And I take that very seriously.

But at the end of the day, my responsibility is to this state. I love doing what I do. I think we’ve been really good at it. It’s a much more challenging job, but it’s a much more rewarding job. The Senate is just too slow and doesn’t do enough to match the style that I’d bring to it. And frankly, I don’t know if I’d be the right fit.

NHJ: In the 2022 campaign for your fourth term as governor — which would make you the first Republican to win four terms, a Democrat has already done it [Gov. John Lynch]…

SUNUNU: I think I read that only 15 governors have ever done that.

NHJ: …We’ll have our research department look into that. But what will you be running on?

SUNUNU: “There’s a lot more to do, right? COVID is, unfortunately, rearing its ugly head, as we suspected it would this winter.  Everything from workforce housing to inflation, the supply chain — we talk about these issues as national, but there is a responsibility to try to do what we can locally to hedge off some of those issues.

We have a lot of money when it comes to ARP [the $1.9 trillion American Rescue Plan passed in March] or this new infrastructure bill, how’s that money going to be spent? Are we going to do smart? There’s going to be a big issue for years to come rebuilding mental health, keeping the Doorway, which has been very successful, moving forward.

And just continuing to balance the budget and cutting taxes, right? That’s the core of what we are, not just as a party, but as a state. It was very clear when the Democrats stood up just a couple of years ago and said, ‘We’re going to have an income tax,’ and I vetoed it and they said, ‘We’re going to do it again,’ and I vetoed it again. And that made me realize, you know, we’re on a very thin thread of letting Democrats control this state and making us just like Massachusetts.

That is not what the people of the state want. And I love this state too much to see it just potentially go that way. So we’ve got to keep fighting. There’s just a lot more to do.

NHJ: Democrats are already predicting your defeat in 2022, they’re saying you’re too extreme, you’re another Jerry Falwell on abortion. You’re not going to get re-elected.

SUNUNU: I’ve got the ultra-liberals saying I’m too extreme. I got the antigovernment [Right] saying I’m too liberal. That probably means I’m right where I need to be. We’re a purple state. I’ve been voted the most fiscally responsible governor in the country and we’re very pro-Second Amendment here. And we try to do right by the individual. And I think we do a really good job of that.

NHJ: The current political strategy is to abandon the pursuit of crossover votes and energize your base. Turn out your votes, don’t try to persuade others. But you’ve done unusually well with Democrats. Is that because New Hampshire is different, or because Chris Sununu is different?

SUNUNU:  I think it’s because of my approach more than anything. I think I have a fairly unique approach. I try to be incredibly transparent. I don’t flip-flop on issues. I am who I am. These are the ABCs of me. From a political standpoint, you need the courage to say, ‘Look, I’m just going to be who I am and I’ll let the chips fall where they may.’ And I think people will respond to that.

If you get results, people will see that. And hopefully, they’ll respond to it in a positive way.