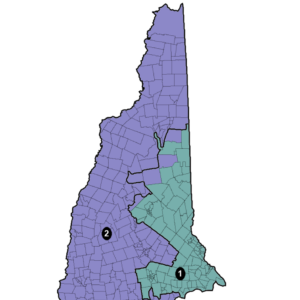 Sununu put the blame on the legislature for drawing partisan maps he said didn’t “pass the smell test.” State House Republicans accuse Sununu of refusing to support plans he had privately signed off on earlier in the process.

Either way, Democrats were delighted.

And the current Democrat representing the First Congressional District was also delighted. He denounced GOP efforts to draw a Republican-friendly district as “a mockery of the redistricting process,” adding, “With today’s announcement from the court, the district lines have finally been settled in a fair manner,” said U.S. Rep. Chris Pappas. “I look forward to continuing to work in a bipartisan fashion in Congress to deliver for and represent the people of New Hampshire’s First District.”

New Hampshire Republicans, on the other hand, were less than thrilled. What hurt most, several State House Republicans said, is that it was a victory that was turned into a defeat by a fellow Republican.

House Speaker Sherman Packard — who had urged Sununu to “honor the hard work of this legislature and not hand this process over to unelected judges and special masters” — had a very different reaction on Jack Heath’s radio show Tuesday morning.

“I’m disappointed,” Packard said. “The last map we offered we felt was reasonable, it was condensed… it was a competitive district. It wasn’t anything outlandish like Democrats have done in New York, Illinois, or Oregon.”

New York’s Democratic gerrymander was so extreme that an all-Democrat Court of Appeals threw it out.

“I don’t completely understand why [Sununu] felt it was an unfair map,” Packard added. “We felt it was a fair map. It was disappointing that he vetoed it.”

Rep. Barbara Griffin (R-Goffstown), who served as chair of the House Special Redistricting Committee, questioned the logic of Sununu’s actions.

“I think it is unfortunate that the proposed constitutionally legal maps were not adopted for our congressional districts. I cannot reconcile his decision to sign some maps and not the Congressional one, especially when I consider the factors that have been indicated by him as important. I look forward to someday being able to speak with him about it,” Griffin said.

“It should also be understood that this means the legislature will get to have another opportunity to draw maps next session, which makes this year’s decision even more puzzling.”

Republican legislators involved in the negotiation process said on background Sununu was involved in the map-drawing process all along and had signed off on some of the same maps he later rejected. His handling of redistricting is one of the issues listed in a petition circulating among GOP state committee members calling for Sununu to be censured by the party.

Sununu isn’t worried. “The same people who tried to secede from the Union, I mean, come on,” he said Tuesday night while attending George Hansel’s Second District announcement event.

Former Trump administration official Josh Whitehouse of Farmington, a supporter of the censure effort, pushed back.

“Is Chris even in the realm of reality right now? He is grouping hundreds of patriotic conservatives that campaigned for him in three races with less than a dozen actual secessionists to his own detriment,” Whitehouse said. “There isn’t a single person in Republican politics who doesn’t think Chris has destroyed his reputation with the party base. The only question left on everyone’s mind is what the hell is he thinking?”

As for the fiasco of the maps, Sununu puts all the blame on legislators.

“They asked my opinion on maps. I put out one months ago for them to consider,” Sununu said. “I made it really clear that you can’t put the two sitting congressional incumbents in the same district, and you probably shouldn’t. [You can’t] put all your urban areas in one district, either. So there were hundreds of ways to do it, and they just chose not to do it.

“That’s it, it was really their choice,” Sununu said.

And Sununu is right that it is up to the legislature, as Packard pointed out on Heath’s show. Saying he plans to run for Speaker again if he is re-elected this fall, Packard added:

“And we’ll have the option of coming back next session and putting another map forward.” If Republicans win a 2010-style super-majority, the Republican House Caucus may have the last laugh.