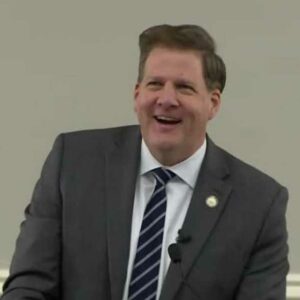 Gov. Chris Sununu’s inaugural address was historic. He is the Granite State’s only Republican governor to get a fourth one.

And in classic Sununu fashion, the speech was also optimistic, full of cheerleading for New Hampshire’s economy, culture, and people — peppered with a bit of snark.

But most of all, Sununu’s fourth (and many people believe, final) inaugural address was political. From tax cuts to parents rights to COVID policy, he filled his speech with references to issues popular with the conservative base. And he also went out of his way to throw down on Democrats on the First in the Nation (FITN) primary in a way Republican primary voters like to hear.

Well, except for those in Iowa and South Carolina.

The New Hampshire primary isn’t usually a featured item in a governor’s inaugural address. But the decision by President Joe Biden and the Democratic National Committee to strip the Granite State of its FITN spot has made it front and center in the state’s politics. Nearly one-fifth of Sununu’s 20-minute speech was devoted to the topic — including a beatdown of the Democrats’ plan.

“After the 2020 debacle in Iowa — Sorry Iowa, but you screwed up — the nation turned its eyes towards New Hampshire,” Sununu said. “At a time of electoral uncertainty and doubt in our elections, New Hampshire put on a clinic for the rest of the nation on how to administer elections. And America breathed a huge sigh of relief as we restored confidence to the entire system.”

But, Sununu added, “the power brokers in the Democrat party in Washington have made it clear that they believe New Hampshire’s time is up.” (The GOP has already committed to the traditional Iowa/New Hampshire/Nevada/South Carolina calendar).

After mocking Biden’s demand to move the first primary to South Carolina (“In 2020, South Carolina’s presidential primary had a turnout of just 16 percent while we set records!”), Sununu declared to Democrats’ FITN plan DOA.

“I have a message for them and President Biden — you can try to come and take it – but that is Never. Going. To. Happen,” Sununu said. “We will not be blackmailed. We will not be threatened, and we will not give up.”

Like most inaugural addresses, most of the remarks were geared toward legislators in the hall and voters at home: Tax policy, education spending, the state’s high energy costs. Sununu also gave a rundown of the state’s best-in-the-nation rankings on personal freedom, economic opportunity, public safety, and low poverty.

And the governor acknowledged the raw political realities in the House, where the GOP has a 201-197 majority.

“The voters of our great state elected a near evenly divided legislature, presenting an awesome opportunity for this type of cooperation. And we have a speaker,” he ad-libbed, a reference to the current chaos in Congress.

But Sununu also targeted some topics he has rarely gone out of his way to promote, issues that are particularly popular with the GOP base. Some State House Republicans were surprised, for example, when he spent time celebrating parents’ rights after vetoing a parental rights bill in the last legislative session.

“Nationally, you have heard a lot of talk over the last two years about two words: ‘Parents. Matter.’ But while those two simple words might be a new concept in a place like Virginia, they’ve been a central concept to our communities and government in New Hampshire since the beginning.”

The Virginia comment could be viewed as an elbow thrown at potential 2024 presidential candidate Gov. Glenn Youngkin (R-Va.)

“In New Hampshire, we distill decision-making down to the lowest possible levers of power, empowering individuals to make their voices heard at the local level, where their voice is greatest,” Sununu added. “We’ve been doing it for hundreds of years, and we’re not about to stop now.”

Whatever subtle shots he may have taken at potential 2024 rivals, Sununu’s big message was impossible to miss.

“Simply put — New Hampshire is the envy of the nation, the gold standard of states, and the number one place in America to live, work, and raise a family.” And he’s the governor who helped make it happen.

“Gov. Sununu is a once-in-a-generation political talent who is rightly receiving increased national attention for his enviable record of growth and conservative achievements. When considering the ongoing House debacle in D.C., it is easy to see how people from around the country might get excited about someone with Gov. Sununu’s impressive record who also happens to be charismatic, likable, relatable and a proven winner.”

UNH political science professor Dante Scala noted the “swipes at more prominent governors” in the 2024 mix like Youngkin and DeSantis, “but he also took shots at Iowa and South Carolina, which doesn’t seem the likely play for someone who plans to campaign in those states next year.”

And Greg Moore with the New Hampshire chapter of Americans for Prosperity thinks the 2024 analysis is overblown.

“If you look closely and squint, you can see some themes that could be the basis for a presidential run, but it seems more like a speech to lay some groundwork from what will be a brutal budget session.”

Sununu concluded his speech with the words “I know I’m up for this challenge,” a reference to his upcoming fourth term as governor.