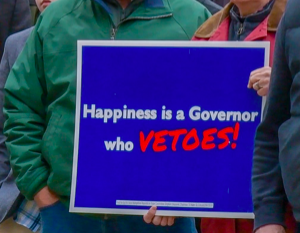 If the Veto Days 2019 legislative throwdown in Concord this week had been a fight, the refs would have called it.

It’s not just that Gov. Chris Sununu had nearly every veto sustained — apparently setting a new record of veto victories for a sitting governor. It’s that the Democrats looked so hapless, helpless and hopeless as it happened.

A bill ending the three-month waiting period for medical pot “was the lone bill overturned this week by both the House and Senate. Most of the more than 50 vetoes taken up were upheld,” NHPR reports.

As previously reported, New Hampshire Democrats were counting on the same Republican disunity on display last year when a GOP majority overrode more high-profile vetoes than the Democrats did this year. That was a miscalculation — one the party’s leadership made worse by rushing out a last-minute budget proposal on the eve of the veto votes.

Sources tell NHJournal this “political stunt” by the Democrats actually galvanized the GOP around their leadership, helping keep the caucus unified. And the party’s successes in sustaining vetoes became a virtuous cycle for wavering party members.  It also gave the GOP minority a much-needed boost of energy as the October 1 budget deadline approaches.

So now not only do Democrats have to negotiate with a confident Chris Sununu coming off a series of legislative victories, but they have to do so knowing he has his caucus on board.

The October 1 deadline is important because of the role it plays in municipal tax rates. The Sununu-backed budget is packed with millions for town budgets and local school spending. Without a budget, cities and towns will be setting property tax rates without that revenue included. “If this budget doesn’t get approved by September 30, if they can’t get their caucus on board and get the votes, none of the property tax benefits from the additional money will be felt by the taxpayers,” Sununu said on the Jack Heath show Wednesday.

“And every single town gets more money. A lot more.”

The most effective selling point Democrats have had in their budget fight with the governor is that their budget gives even more to local schools and towns (thanks to tax hikes increasing revenue) than his.  If their refusal to drop tax-hike demands and cut a deal has the opposite effect for local towns and homeowners, it’s hard to imagine a worse political outcome.

The NHGOP posted this video after the first Veto Day session.

The GOP’s display of power is particularly impressive given the issues involved: minimum wage, green energy, etc.  All issues Democrats have used effectively against the GOP in the past. As Democrats prepare for the final round of budget negotiations, they have to ask themselves: If the Republicans aren’t going to back down on these hot-button issues, what makes Speaker Shurtleff or Senate President Soucy think they’ll do so over tax hikes?

Democratic legislative leaders, particularly those in the House, have shown that they aren’t particularly adept at strategy. If they were, they would have killed some of these bills before they got to the governor’s desk. But if they can’t see the disaster that will befall them if deny local homeowners a property-tax break — of there’s even a hint of that happening — they deserve everything they get.

No wonder the NHGOP is dancing…