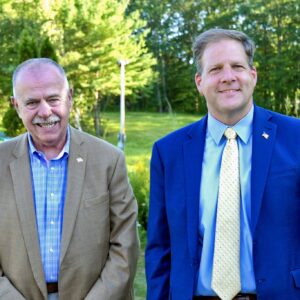 Gov. Chris Sununu threw his support behind seacoast businessman Lou Gargiulo in the race for New Hampshire GOP chair on Tuesday, putting the Republican governor on the same side as some of his most vocal opponents within the party.

“As Chairman of the NHGOP, Lou Gargiulo will provide strong, new leadership for Granite State Republicans. Lou will unify the Party, focus on winning elections, and is the proven fundraiser we need. I urge the [State GOP] Committee members to vote for Lou at the Annual Meeting,” Sununu tweeted.

Gargiulo is running against current Republican National Committeeman Chris Ager, who is viewed as the frontrunner by party insiders.

“I thank Gov. Sununu for his support,” Gargiulo said in a statement. “Our campaign for chairman has received support from Republicans and organizations of all stripes from across the state because they know that I have the experience, drive, and desire to unite all Republicans, raise record resources, restore our party, and win elections. To do that, every Republican needs a voice at the table, and we need to work together towards our common goal of turning New Hampshire red.”

Sununu said in December he planned to weigh in on the chairman’s race. He has already endorsed State Board of Education member Ryan Terrell in his contest with longtime GOP activist Christine Peters for vice chair.

Asked about Sununu’s endorsement of his opponent, Ager told NHJournal, “If elected, I will represent the entire Republican Party and our platform, not just one part or one individual person.”

It is not the first time Sununu and Ager have butted heads. In 2020, Ager challenged incumbent Steve Duprey for the RNC job. Duprey had the backing of Sununu and his team. Ager won handily. And Sununu had been recruiting a candidate to run against Ager in the days before Gargiulo jumped into the race.

During an NHJournal podcast interview last month, Ager was asked about Sununu’s efforts.

“I actually think it helps me because I can work with anyone. Nobody’s going to own me. I’m not anybody’s person. I’m the party’s person,” Ager said.

And just hours after Sununu’s endorsement was announced, Ager released a list of supporters on the New Hampshire Republican State Committee, including 130 endorsements and well over 200 committed votes. He threw in, “I look forward to working with the governor, the Republican leadership of the House and Senate, and the State Committee to produce electoral victories in 2024 and for years to come.”

While there are 505 members, attendance at a state committee meeting rarely reaches 400 — two years ago it was 360 — which means 200 votes would likely be enough to ensure a victory.

Sununu’s decision to back Gargiulo puts him on the same side of the contest as some of his traditional opponents in the most MAGA wing of the Granite State GOP. For example, Gargiulo has the support of outspoken election denier Dan Richard, who counseled the candidate to challenge every ballot in his 12-point loss to Debra Altschiller in November’s Senate District 24 race. Richard has also sued Sununu (among many others) in his efforts to challenge the outcome of the 2020 election.
And more than just the election issue has drawn support for Gargiulo from the party’s pro-Trump base.

“The ‘New World Order’ (NWO) or one-world government administered by self-appointed major powers is not an ideology I would ever support! It’s impracticable to believe that nations would surrender their sovereignty, and their personal cultural ideologies to elitists,” Gargiulo posted on his “Lou Gargiulo for New Hampshire GOP Chair” Facebook page the day before Sununu’s announcement.

As for Trump and his 2024 presidential campaign, both Ager and Gargiulo have pledged that if elected party chair they will remain neutral.

“I believe without equivocation to ensure we keep the First in the Nation Primary, the NH-GOP Chairman and all other party officers must remain neutral,” Gargiulo said in a statement. “Preserving the New Hampshire Primary is of paramount importance. Unlike New Hampshire Democrats, I will not allow it to be lost because of my actions. Once the primary is over, I will work tirelessly for our nominee, whoever that may be.”
Ager agreed. “All primary candidates should be treated equally. The party will be completely neutral with all candidates until the primary is over. Then we support our nominee 100 percent.”