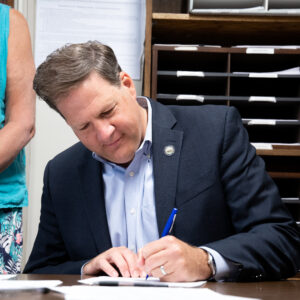 Republican Gov. Chris Sununu filed his paperwork to run for a fourth term on Friday, predicting a GOP sweep of the incumbent Democrats in the federal delegation and pledging to continue his focus on low taxes. If Sununu is re-elected, as is widely expected, he would be the first Republican governor to serve four terms in office, tying the record of popular Democrat Gov. John Lynch.

Sununu, who walked down to the Secretary of State’s office without any fanfare or campaign sign-waving, said the focus of his campaign will be the economy and preparing for the recession he fears is on the horizon.

“There is, unfortunately, a recession coming,” Sununu said. “Inflation, gas prices are hitting really hard. But we’ve had good fiscal management, and because we’ve been successful [managing the budget] over the past few years, we have a lot of extra funds right now to invest in one-time infrastructure, mental health, and whatever we can do that allows us to keep putting dollars back to offset property taxes.”

Democrats have made the state’s notoriously high property taxes — the third-highest in the country — a central part of their 2022 campaign message. Sununu and the GOP-controlled legislature insist they’re already providing relief.

“We’ve put hundreds of millions of dollars back in property tax relief, and I think even in tough times, with fiscal management, we can keep doing that without short-changing any of the exciting programs we’ve put out there.”

Sununu didn’t make any secret of who he blamed for the coming recession, either. Asked if the all-Democrat federal delegation had done enough to stop inflation, Sununu laughed.

Democrats have been arguing that inflation is the result of actions beyond Washington’s control, like “Putin’s Price Hike” or, as President Biden said Friday, greed in the “Big Shipping” industry. Sununu put the blame right back on D.C.

“Inflation is the worst tax on the poor that bad management can bring. And that’s exactly what Democrats in Washington have done.”

And, he added, “my sense is that Republicans are going to be very, very welcome in November.” In particular, Sununu gave a shout out to Keene Mayor George Hansel, the only Republican running for federal office he’s endorsed thus far. “Sorry, but Annie Kuster’s going to be fired this coming November.”

Sununu will face off with Sen. Tom Sherman (D-Rye), the only Democrat who filed to run against him. And according to Sherman, “this is the first time we’ve been able to focus on November without a divisive Democratic primary since Maggie Hassan was re-elected governor in 2014.”

Sununu however, isn’t so lucky. He has five Republicans who’ve filed to challenge him in the GOP primary: Julian Acciard, Jay Lewis, Richard McMenamon, Thad Riley and Karen Testerman. Does he think that’s a sign of trouble with his base?

“My message is always to the 1.4 million people I represent here in New Hampshire. We’ve obviously done it very, very well. If you look at the polls, Republicans are pretty satisfied with the job we’re doing,” Sununu said.

David Pourshoushtari, Communications Director for the state Democratic Party, has a different take.

“Chris Sununu is a failure. Whether it’s caving to radical right extremists and signing the most restrictive abortion ban in New Hampshire History, failing to deliver property tax relief, failing to support our schools, or failing to address the lack of affordable housing in the state, it is clear that Granite Staters cannot trust Sununu to deliver for them,” Pourshoushtari said in a statement.

Sununu focused on what he believes is the coming economic challenge, not a political one.

I think we’re going to have some pretty tough economic times in the coming years,” he said. “And having good management, creating opportunities is really what leadership is all about.”